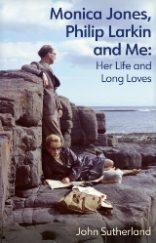 MONICA JONES, PHILIP LARKIN AND ME

It seems that it’s not only “your mum and dad” who can “fuck you up”: faithless, manipulative, emotionally-costive lovers are equally well-equipped to do the destructive deed.

This, the first, biography of Philip Larkin’s long-term and most significant ‘other’, the eponymous Miss Jones, has been written by her former student and friend (previously a biographer of Stephen Spender), an Emeritus professor at the U.C.L. It displays far greater candour and insight than the dry-ish screed on Spender (who, though himself possessing no great poetic skill, could be fascinating when holding forth on his own life and acquaintanceships). Here, Sutherland writes from personal experience backed up by a late scrutiny of his subject’s own correspondence which has been both painstaking – and a painful read. He portrays himself as something of a bit-part bystander whose first loyalty is to an erstwhile patron (Jones) but who, nonetheless, acknowledges Larkin (slightly inelegantly) to have been “the most ‘real thing’ poet of [his] lifetime”. This is a judgement with which Monica Jones would emphatically have concurred.

Hers, it has to be said, appears to have been a formidable, yet somehow ‘needy’, personality. She was born in the same year as Larkin, 1922, to working-class parents and achieved a scholarship, as did Larkin, to read English Literature at Oxford. She did not actually meet him until they coincided on the staff of U.C. Leicester in 1946. Prior to that meeting she had herself been a talented versifier

but was to write nothing subsequently. The above quotation – not ‘about’ Larkin – is prescient: he was to be ‘the love of her life’ but displayed little desire, for long passages of time, to share much of his own. Not that Monica was without suitors. Good-looking in her youth, a ‘striking’ dresser and an excellent cook, she was courted by a glamorous ex-R.A.F. pilot, ‘Bish’, before throwing him over for her glum-countenanced fellow Oxonian.

Would it be fair to venture that Larkin ‘destroyed’ Monica’s life? Well, he was serially unfaithful; duplicitous (not quite the same thing); controlling (instructing her to speak less loudly and to stand less close in company); gratuitously malicious (egging on his friend, Kingsley Amis, to forever defame her as the loathsome ‘Margaret Peel’ in Lucky Jim). Additionally, he was generally absent when she most needed him (on occasions, for example, when she was grieving the loss, a few months apart, of her parents – or when she was being academically bullied by her supervisor at Leicester). Against this, he wrote her the long, beautifully-crafted letters collected in Letters to Monica (2010), collaborated with her on – or more properly ‘co-edited ‘– The Oxford Book of Twentieth Century English Verse (1973) and made her the dedicatee of The Less Deceived (1955). Towards the end of his life, after he had ruthlessly jettisoned his library colleague and joint-consort, Maeve Brennan, Monica would get the consolation prize of co-habiting Larkin’s ‘northern fastness’ at Hull (which she would ultimately be bequeathed along with the best part of his literary estate).

So what, exactly, was it that this oddest-of-couples shared – other than a passion for traditionally-structured English verse? The remembered enjoyment of a few cosy Lord’s weekends? A few fugitive holidays on Skye or Sark? A penchant (unmentioned here) for the scatological defacement of novels? Larkin respected Monica’s critical intelligence: she contributed a minor revision to ‘An Arundel Tomb’ (originally conceived as a sort-of valentine card to her). It must have been a huge fillip to his writerly self-esteem that this attractive, ostensibly confident, woman placed such a value on his artistic gift. Also, he could gratify – concurrently with his sexual needs – the urge to enunciate, and find reflected back, the kind of unthinking bigotry and racism evidenced by their co-authored ‘song’

Finally, perhaps saddest of all, they ‘enjoyed’ a very English species of pessimism in regard to life’s diminishing prospects which, at its inimitable worst, can harden into a curious form of – if not exactly ‘wish-fulfilment’ — then, at least, self-fulfilling prophecy.

Sutherland’s personalised biographical memoir fleshes-out the shadowy figure appearing in previous Larkinography. She is celebrated here as an eccentrically talented lecturer, enormously well-read and as a lifelong trenchant contrarian. She would survive Larkin by some sixteen years: housebound, alcohol-dependent, increasingly a relic(t) from the past. She had written to Philip (in 1955) “we are both of us burnt children” and he (to her, three years later) “it seems to me I am spoiling yr life in a hideously ingenious way”. He had a genuine talent for dispensing universal, unsparing (though generally well-metred) truths – but, as is becoming increasingly clear (not least from this bracing and informative study) it sprang from a shallow, even fraudulent, source. In the end, no one ever knew Philip Larkin better than Margaret Monica Beale Jones. And, as she disclosed to Andrew Motion, “he lied to me the bugger, but I loved him”. She certainly must have.