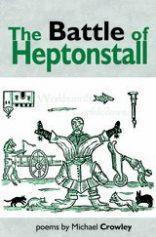 Poetry review – THE BATTLE OF HEPTONSTALL: Stuart Henson admires the eloquent blending of historical and contemporary in Michael Crowley’s collection

Conflict, conflicting loyalties, trust and betrayal: the very stuff of drama. The stuff of history too. These poems grew out of a play, and that drama grew out of history. And History, as another poet said, is now and England.

The Battle of Heptonstall is a book of two halves. The first is made of monologues developed from a community play the author wrote for the battle’s 375th anniversary. The second—slightly less tied to monologue—looks at contemporary divisions in the light of what’s gone before. As Michael Crowley puts it in his introduction: ‘It is strange how some themes remain unresolved four hundred years later, how questions refuse to lie down but then this is Britain and history isn’t in the past.’

The voices of the first part speak with a grave simplicity:

And it’s this lack of adornment, the apparent lack of sophistication, that gives these poems their power. Crowley has found an idiom which is adequate to the characters’ predicaments and convincingly historical. The sequence unfolds, in the lead-up to the battle, following the inner struggles of a family of clothiers, their neighbours and their enemies. Crowley becomes, in effect both dramatist and spirit-guide. One principal actor is Rose, an orphan who has been drawn in to the world of radical preaching. She’s innocent—and dangerous. And she has bewitched Joseph, the son of the weaver John Cockroft.

Rose is sincere but fickle. She has poor Joseph entangled and yet she loves another—one who turns out to be a Royalist spy and a traitor. When Joseph finds her picking rose-hips on Popples Common (the name itself rich with land-rights resonances) she’s not above flirting, and Joseph’s emotions are conveyed with tender economy:

It’s a truism to say the Civil War pitted community against community, brother against brother. What Crowley knows and shows is that extremism—religious and political—and its twin, zealotry, almost always bring suffering with them. And the greatest pain is when you understand your opponent’s point of view, respect his sincerity, but believe him to be fundamentally wrong. There are voices, equally convincingly presented, from both sides: a pike-man, a preacher, the local Squire, a Catholic priest, a Royalist commander, the Cockroft family (as in all wars it’s the civilian population that bears the brunt) and the Parliamentarian soldiers billeted on them.

The dialectic is cleverly embodied in the ‘Wind of Doubt’ which troubles the spy, Edmund Reeve: ‘Are they traitors or is it you?’ it asks. Reeve’s background, including the torture of his father, is shown with some sympathy. Even his confusion:

One of the finest evocations of period in this section is Alice Cockroft’s view of the soldier in their house. In this we can see not only her shrewd assessment of his personality, his psychology, but also the speaker’s own apprehensions and the delicacy of her position. The poem, ‘Lodger’ deserves to be quoted in full:

There’s a lot of art concealed here: the drumbeat of half-rhyme—can, belongs, bones, done upon, open, mutton, son—tightening to the jaunty-sinister triple rhyme of the last stanza; the syntactic inversions that give the speaker’s voice a local habitation; the sequencing of images she uses, of meat, blood, wolf, hound, culminating in that penetrating, enigmatic closing line. And this monologue is one among thirty-odd of similar quality.

The sequence makes you want to see the play it grew out of. Even within the constraints of the book-of-poems setting the dramatic construction is nicely worked, the love-triangle playing out through betrayal and mischance towards Joseph’s bathetic and incidental death on the night of the battle, and Reeve’s arrest, trial and execution. There’s palpable tension: the dramatic clash of opposing forces each believing it has God on its side. The last word should probably go to Alice Cockroft, timeless observer, mother, sufferer. The poem is titled, ironically, ‘God’s Work’.

It’s a rhetorical question. She knows who’s responsible. The people who are confident they can interpret God’s word—and one in particular.

Perhaps the best way to show how the second part of the collection relates to the first would be to take that last line and apply it to one of two poems in the second half that explore the effects of the Manchester Arena bombing. In this case, I think, it’s a father who speaks. ‘The Last Day of the Shrine’ finds him standing by a railing in the city centre on a day when the makeshift memorials are being removed. ‘It’s not time yet,’ he says to the cleaner with the ‘unfurled’ bin-bag. It’s clear that the temporary shrine is where he goes most mornings, where people stop, stand beside him, sip their coffee and go. It’s hard to contemplate even beginning a piece like this. Where empathy must be absolute, and without the distancing of the historical, there’s not the slightest room for the poet to exploit the persona he’s inhabiting. All to Michael Crowley’s credit, then, that the avoids playing to any gallery and manages to convey that enduring sorrow in a modern context. The speaker knows ‘A shrine is where people pretend / they haven’t forgotten.’ The way grief un-fixes things is again poignantly conveyed in the last three lines:

The bomber, presumably, believed he had God on his side. The other poem, whose title ‘Aftermath’ is also the title of the whole section, puts the bombing squarely into the context of clashing ideologies, but not into the simplified box that politicians are wont to call “The War on Terror”.

It’s not, of course, a true peace. Crowley explores the equivocal meaning of the word in the second part of this poem, and his conclusion is anything but an easy one.

The scope of the Aftermath section is broad. The pike-men of the first part become a squaddie from the conflict in Northern Ireland, a veteran in recovery from experiences in Iraq or Afghanistan, a bomb disposal expert… Michael Crowley gives them uncomfortable witness too. The ending of ‘Chances Are’ in which the Ordinance Disposal officer explains his work through an extended metaphor is stunning:

The conflation of bomb and child is symptomatic of the soldier’s state of mind, the delicacy of his gestures mimetic. The sense of separation from love and reality is intense.

One of the striking things about this book is its refusal to judge. If Crowley is on any side it’s the side of understanding. The original play, he tells us, was funded by ‘a Brexit and the arts related initiative because of the supposed parallels between contemporary divisions in the UK and the great schism of the 1640s’ and he addresses that contemporary division directly in ‘Fire-Bug’. There’s a serious point, but he’s able to approach it obliquely—and with the leavening of wit he allows the speaker as he explains the consequences of his voting decision.

The reader is left to figure out the connection between the speaker’s present situation and the memory of childhood he presents us with in the second half of the poem—a childhood of opportunities denied and just-for-the-hell-of-it amusement, the fire-raising of the title. If you read this book—and I urge you to—it may not change your mind but it might enlarge it. It’s a book about important issues: Justice (‘Break-in at the Gallery of Justice’), the freedom to think outside accepted norms (‘Hold That Thought’), environmental loss (‘Gone’) and climate change (‘Low Pressure’) with a good deal of amusing social observation thrown in, in poems like ‘Dog’s Own Country’ and ‘Pub Landlord West Yorkshire’.

Ultimately, Michael Crowley’s The Battle of Heptonstall is a standard-bearer for Smokestack’s campaign to champion writers who’re radical or left-field and working a long way from the metropolitan centres of cultural authority. ‘Back and Forth’, the poem that concludes the book, brings it all together. The title, describing the movement of the weaver’s shuttle, could be the very definition of dialectic There are opposing voices. The first, which I take to be someone like Henry Ireton, is essentially anti-suffrage, suggesting the privileged part of society is somehow wiser, more fit to make decisions—and to retain control, incidentally, of the ways we are governed.

This morphs into another, perhaps an angry Remainer, declaring in desperation ‘Not everyone should be allowed to vote.’ The clue to where Crowley himself stands is probably in the off-set final stanza which offers us three Brechtian aphorisms:

The first two belong to the age of the Levellers. The last is richly ambiguous and brings us into the present. What is the queue? Dole queue? Bread-line? Voters waiting to cast their ballot? And what is that contract that adds up to nothing? Zero-hours employment? The Hobbesian Social Contract? The contract between a people and their Government remains valid only when faith is kept between them. We have lived before. We have seen it all before. Now and in Heptonstall in 1643.