André Breton’s first surrealist manifesto, published in 1924, expressed the ambition of surrealist art to directly communicate the subconscious without the interference of reason.

Around that time, Eileen Agar was at the Slade School of Fine Art in London preparing to embark on a career of many decades during which she would find herself hailed as a surrealist but became much more besides.

Thirty years after her death, the biggest exhibition yet of Agar’s work relishes her female strength and focuses as much on how surrealism does not define her work as how it does.  She was also influenced by cubism, though we discover less about exactly how she stood towards that other great movement of her times.

When it came to surrealism, Agar found herself questioning Breton’s central tenet of its ability to express the subconscious mind.

She also dared to take issue with the double standard that allowed the men who dominated surrealism to take on numerous lovers while expecting fidelity from their female muses.  Muse of Construction (1939) is interpreted as a playful swipe at Picasso, a colossus who exploited women.

Agar took control.  She was at once her own muse and drew inspiration from Joseph Bard, a Hungarian writer she met at a party in 1926 and for whom she promptly deserted her husband.

In her determined independence, Agar blended surrealist tendencies and techniques with her own fascinations: the natural world and the classical world, together with her muse – especially his head.

Most famously, Bard’s head provided the model for the title piece: Angel of Anarchy (1936-40).  An unsettling, almost voodoo blend of embroidered silk, feathers, shells, African beads and diamante, it began life as a plaster cast, but Agar found herself “dismayed by the deadness of the white plaster”.

Less well known is the work’s sibling Angel of Mercy (1934), which is closer to a classical bust, with mystical stars added and a mass of tight curly hair, like barnacles.

Heads feature again and again as Agar delves into what is going on inside them.

One of the three pieces chosen for the 1936 London International Surrealist Exhibition that proclaimed Agar to be part of the movement is Quadriga (1935), which is one of her most overtly political works.  The four horse heads recall the four horsemen of the apocalypse and the concern Hitler was the fourth.

Another standout for me is Marine Collage (1939) in which lampreys, leeches and fish snakes swirl, menacing and mysterious, through human heads.  Agar might have questioned surrealism’s ability to directly portray the subconscious, but she delves deep.

Sea is more broadly a theme.  Agar took to photographing the rocks beside it and collecting what it washed up on beaches in another rebellion from the surrealists who favoured collecting objects in flea markets, while she preferred to find things in the natural world.

She rejoices in the forms and serendipity of the found in Fish Basket (1965), a felicitous collection, including a knobbly gourd and a painted giant prawn sitting in a basket decorated with bold, coloured cardboard shapes.

It counts as an almost domestic, but cheerful work among the great canvasses of her later years when a larger studio and her embracing of acrylic allowed Agar, creative to the end, to give full rein to colour.

If the relatively large audiences drawn by a sweeping retrospective are daunting, the Wallace Collection, fresh from lockdown renovations, pairs the eclecticism of its permanent collection with a rare reunion that allows almost private viewings of two great Rubens’ landscapes reunited for the first time since their separation more than 200 years ago.

Het Steen, between Antwerp and Brussels, is the estate to which Rubens withdrew for the last years of his extraordinary life as a painter, diplomat and spy.

A View of Het Steen in the Early Morning has been loaned by the National Gallery to be shown in conjunction with The Wallace Collection’s The Rainbow Landscape.

It’s the first time Het Steen has been loaned and is in return for an inaugural loan by the Wallace Collection, which typically kept its works to itself, of Titian’s Perseus and Andromeda to enable the National Gallery in 2019 to complete Titian’s Poesie cycle for the first time in 400 years.

The two Het Steen paintings are displayed in “historically appropriate, matching frames” created for the exhibition, which displays them face to face, as it is thought Rubens displayed them at home.

We’re told the idealised landscapes were dear to Rubens as they were painted for pleasure rather than on commission and entirely by the artist, rather than with the help of assistants who worked with him at his studio in Antwerp.

It’s a world away from Agar’s take on surrealism, or is it?  Both artists celebrate the regenerative forces of nature to which we have been sensitised by months of lockdown and both exhibitions are a joyful celebration of a cautious reopening after a period of painful reflection. 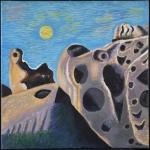 Never hit a woman, even with a flower … CALLED BACK