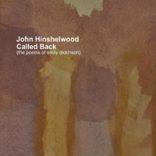 CALLED BACK: Neil Fulwood is impressed by John Hinshelwood’s CD of songs and instrumentals inspired by Emily Dickinson’s poems

Settings of poems have long been a staple of the repertoire. Classical music abounds with lieder: Schubert’s Winterreise, from a cycle of poems by Wilhelm Müller, Schoenberg’s Gurre-Lieder (which is actually more like a cantata), from Jens Peter Jacobsen’s verse, Mahler’s devastating Kindertotenlieder, from works by Friedrich Rückert. At the more upbeat end of the scale, where would any self-respecting New Year’s celebration be without the traditional folk song setting of Burns’s ‘Auld Lang Syne’? And would the Ninth Symphony have achieved its hymn of universal brotherhood had Beethoven not broken the mould and incorporated Friedrich Schiller’s ecstatic ‘An die Freude’ (albeit in a somewhat reconfigured form) into the final movement?

The interrelationship between poetry and music is, of course, obvious and needs no further discussion here. The history of Emily Dickinson’s relationship with composers could easily merit an article several times as long as this review, but has some bearing on matters at hand, so a few thumbnail comments are justified. Aaron Copland’s 1950 cycle for piano and vocalist Twelve Poems of Emily Dickinson is arguably the most renowned work, but Dickinson has also been muse to John Adams, Michael Tilson Thomas (who composed his cycle following a conversation with fellow Dickinson fan Renee Fleming), Judith Weir and Jane Ira Bloom. It’s a testament to Dickinson’s enduring legacy – and the modernity of her work – that so many of these musicians are contemporary.

Now we have John Hinshelwood’s Called Back, a cycle of eleven poem settings and three instrumentals (the instrumentals all take their inspiration from passages from Dickinson’s letters), and the touchstone is closer to Jane Ira Bloom’s jazz-infused response to Dickinson’s work than to the classical traditional of the other composers I’ve mentioned. A towering figure in the American literary canon, it’s entirely appropriate that Hinshelwood’s interpretations of Dickinson have about them the feel of a great American Songbook, and particularly that so many specifically American musical genres are invoked throughout the album: country, bluegrass, jazz, blues, soul. Soundscapes emerge that are redolent of Townes van Zandt, Emmylou Harris, Steve Earle (particularly in his work with the Del McCoury Band) and even Nebraska-era Springsteen.

Celtic inflections are also prevalent – fittingly, given the contributions from Mairi Orr, Tim Black, David Bowden, Dave Currie, Colin MacFarlane, Ed McGlone and Alex Sharples, all hugely respected talents on the Scottish folk and jazz scenes. Naturally, a respectable tranche of American musicians make their presence felt, including Steve Forman (whose CV reads like a Who’s Who of contemporary recording artistes) and Cathryn Craig, whose haunting vocals underpin Hinshelwood’s on a couple of tracks. Elsewhere, musicians from Australia and England round out the talent. It’s heartening that what obviously started as a passion project for Hinshelwood was ultimately realised as something of a global collaboration.

Unlike Copland, who titled all but one of his settings after the first line of the poem (a standard approaching in referencing Dickinson’s work since all of her poems are untitled), Hinshelwood has opted to give each piece a succinct title, conferring upon the album a track-listing more in keeping with what modern listeners might expect; most of his choices cannily bring to mind the original poem. The absolute respect for Dickinson’s verse shines through in every aspect of Called Back, from the musicianship to the accompanying booklet with its concise introductory essay by Hinshelwood, a recommended reading list, trenchant quotes from Dickinson’s letters, quotes on Dickinson from other writers, and footnotes where necessary to provide context.

I intended to listen to Called Back (the title references the epithet on Dickinson’s tombstone, itself referencing a plaintive turn of phrase in her final piece of correspondence) four or five times before starting to write this review; to live with it for at least a week. A week turned into a month and the album became a constant companion. I listened to it at home, on the drive to and from work, and on longer drives to see family and friends in different counties. I am convinced that it will become one of those timeless albums: an old friend that uplifts, that gives solace when required, that gets broken out during road trips or slid into the CD player and sampled, along with a fine single malt, on quiet evenings. I cannot recommend it highly enough.