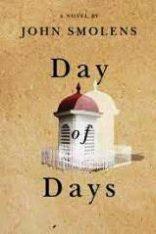 DAY OF DAYS: Charles Rammelkamp admires a powerful fact-based novel by John Smolens about a school bombing in 1927

We’ve all heard of “Michigan Man,” close relative to “Florida Man,” scofflaws in the name of “freedom” who bring assault rifles to the state capital when Donald Trump calls on them to “liberate” their states from the oppression of government officials telling them to wear masks to protect themselves and others. Andrew Kehoe, portrayed in this book by John Smolens, may be the original Michigan Man, direct ancestor of Timothy McVeigh, the Oklahoma City bomber with ties to the Michigan Militia.

Day of Days is a novel based on a real, historical event, the bombing of a schoolhouse in the farming community of Bath, Michigan, on May 18, 1927, by a “disgruntled” citizen, Andrew Kehoe, who was angry at having to pay too much in taxes, for a school in which he had no children enrolled. Kehoe also bore a grudge for having been defeated in a local election for township clerk, and is clearly a man driven by his resentments.

But while the first part of the novel is almost a character study of the man who would be responsible for the deaths of forty-five people, including himself, and the maiming and injury of hundreds more, the truly haunting aspect of the narrative is the effect on the survivors.

The novel begins and ends as a first-person narrative in the voice of Beatrice Turcott, who is fourteen years old when the events occur. As she tells the story, she is a bedridden old woman near death, remembering it all over again. She tells us that she has never truly forgotten. In between, a third-person narrator relates the events, often focusing on Bea’s younger friend Jed Browne and at other times just telling us what happened, from an omniscient perspective.

The book is divided into three parts. In the first part, we meet Kehoe and other characters, in particular Bea, her older sister Alma, Jed, and Jed’s older brother Warren. They are basically innocent kids whose lives are about to be changed forever. Alma and Warren are just becoming aware of their sexuality. Jed and Bea are “younger siblings,” ordered around by Alma and Warren. Part One, “Michigan Soil”, takes place in the weeks leading up to May 18, the day of the terror. Jed becomes employed by Andrew Kehoe after his older brother puts him up to approaching the strange man who always wears a suit and a tie, even when he is driving his tractor, to farm his land.

Kehoe is a meticulous man with a background in engineering. He is forever talking to Jed about “the future,” what it will look like with cars and electricity. We understand how unblemished the future is for these children who’ve never known anything outside their chores and lessons, who’ve never been farther from home than Lansing, how mysterious and even intimidating the future seems.

Kehoe’s childless marriage is another source of disappointment for him. His wife is sickly, and he is always taking her to doctors. They argue about finances. He fears his property is going to be taken from him. Jed’s main job is to help Kehoe blow up tree stumps on his property with sticks of dynamite. Kehoe will use the dynamite to blow up the school and his farm – and himself.

Besides talking about the future, Kehoe also asks Jed what it means to be a “criminal.” This philosophical conundrum is also central to the novel. A sign Kehoe has made reading “Criminals are made, not born” is found hanging from a post, after he’s gone.

Part Two, “Day of Days”, relates the events of May 18 in horrific detail, again from rotating points of view, in Bea’s voice, in the voice of the unseen narrator focusing on Jed, and the omniscient reporter. The section begins, “It was the day of days around which all other days pivot.” We read how the town becomes aware of who is behind the bombing and the horrific aftermath. One of Bea’s favorite teachers, the young Miss Weatherby, is found buried under rubble with two small children on her lap. Warren, Alma’s sweetheart, also dies.

Part Three, “Michigan Dirt”, focuses on the aftermath, the summer in Bath that follows the horrific bombing. Alma has lost her mind, Jed has become angry and gets into fights. Smolens writes of a couple of random children who survived, “Both children had nightmares. The girl frequently wet her bed.” PTSD, though never identified as such, is very much a part of the picture, of the “future.”

Jed, whose older brother was killed, particularly feels survivor’s guilt. Thinking of the ubiquitous men they’d all seen hopping freight trains, stealing chickens, he thinks, “Hobos were treated like criminals, but all they did was live by the railroad tracks and go from place to place. One even helped Bea when she broke her leg. A criminal sees things others don’t see. A criminal understands something’s wrong. Kehoe was a criminal.” Jed feels guilty for not having seen what Kehoe was up to, thinking that he could have prevented it. Jed reflects he “should have seen it and done something to stop it. Or he should have been in the building with the others so it wouldn’t matter to him now.”

The novel comes to a dramatic conclusion just before the start of the school year that September of 1927 when Bea, Alma and Jed all make momentous decisions that don’t turn out the way they planned, the culmination of all that shock, but I’m not going to spoil it by spelling it out.

Reflecting on her imminent death, Bea thinks, “Rest in Peace, it’s an expression of faith. I’m no longer so sure about any of that afterlife business, but my hope is that they are right about there being peace.” Michigan Man’s deeds have far greater effects than simply scratching the itch of his bitterness.

Day of Days is at once philosophical and action-packed, a riveting story and a meditation on mortality, written in almost Faulknerian prose.