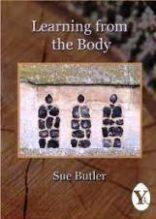 Poetry review – LEARNING FROM THE BODY: Emma Storr reviews Sue Butler’s chapbook which draws on her experience as a family doctor

‘Knowledge with Compassion’ is the motto of the Royal College of GPs but it could equally apply to this debut pamphlet, Learning from the Body, by GP Sue Butler. She explores the human condition, birth and death, love and loss, with deep understanding that comes from her experience as a doctor in addition to her other roles as parent, daughter and wife. A variety of poetic forms are used skilfully to reflect different moods and subjects.

The poem that gives the pamphlet its title is a description of a post-mortem proceeding in the basement of a building while ‘outside the pedestrians / pass soundlessly to and fro’, unaware of the intimate examination of the body that is taking place inside. The full impact of this procedure on the narrator is subtly described:

We are struck by the contrast between the living body of the speaker and the dead body of the corpse she is examining under the supervision of the pathologist.

Comparison between bodies is a recurrent theme in the pamphlet. In “The Work of Women”, the pregnant narrator is carefully repairing a tear or cut in the vaginal wall of a woman who has just given birth. The nine three line stanzas reflect the three bodies involved – baby, mother and doctor. Butler captures lyrically the everyday miracle of birth and the emergence of a new, distinct human being as:

Poems with a medical theme are interspersed with others celebrating the natural world such as “Walking up Quinaig”, “Whale” and “Walking away”. The close observation of nature evokes a songlike quality into the text. In “Whale”, the short lines add to the sense of vulnerability that the narrator feels in a small boat in the presence of the long ‘dark bulk’ of the whale gliding beneath with the ‘sumo curve / of your humpback’ rising and straightening below. In “Walking Away”, Butler delights in using the vocabulary of geology to describe the landscape in grits, scars, clints and grykes. We travel with the narrator across the ancient terrain ‘built of snailshells / coral, sea lily skeletons’. This lovely line is repeated at the end of the poem, adding to the sense of history and our transient presence compared to the million years old bedrock.

The complex demands put on doctors, particularly female doctors, feature in several poems. “Six o’clock” is in the form of a pantoum. The repeating lines are ideally suited to the guilt and frustration the narrator experiences when she has to visit a patient urgently at the end of the day, disappointing her son who is waiting at home to be taken to his Tae Kwan Do class. He tells her:

The theme of juggling impossible demands as a woman doctor is also at the heart of “Equality for Boys”. This poem uses sporadic rhyme to emphasise how differently and unfairly women in medicine are treated or expected to behave compared to their male counterparts.

Death and loss are poignantly expressed in poems such as “In Memoriam”, “Last rite” and “It seemed that some of us were made of nothing”. Butler’s experience of working as a GP means she has shared intimate moments with recently bereaved patients and their families. Her respectful and carefully crafted poems capture the emotion without sentimentality and are all the more moving for this restraint. In “Last Rite”, a wife covers her dead husband with a ‘blue striped sheet’ and makes tea for herself and the visiting doctor. The poem ends simply:

Learning from the Body is a delight to read and demonstrates great poetic skill as well as humility and humanity. I look forward to seeing a full collection from Sue Butler in the future.