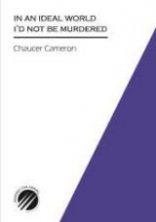 Poetry review – IN AN IDEAL WORLD I’D NOT BE MURDERED : Deborah Harvey gets to grips with some challenging poetry by Chaucer Cameron

while in ‘I Will Leave You For A Moment While I Trade’, the reader is given a glimpse of how the inconvenience of a period might be handled in a doorway while waiting for the next punter.

These details act as a foil for matter-of-fact and shocking lines, such as ‘I know the rules: no names, no dates, just numbers’ and ‘beneath this rose tattoo – a barcode – ’. Almost all the women and girls inhabiting these poems are identified by little more than their first name, speciality, and occasionally fate. This dispassionate approach reaches its apogee in the poem ‘Coup de Maître’, in which the dressing of a crab is used as a metaphor for the consumption of a sex worker, and is described from the point of view of methodical punter possessed of a cold, psychopathic detachment.

There’s also a strand of surrealism running through these poems, and this gives them a sudden depth, to the point where the readers, wrong-footed, find themselves frantically treading water. In the startling opening poem, ‘128 Farleigh Road’, a client, or maybe a pimp, is found dead at the foot of a staircase, and a strange, dislocated intimacy is engendered:

This sensation of being removed from an experience as it is happening is familiar to anyone who’s been trapped in an abusive situation, and a sustained incidence of dissociation is brilliantly captured in the poem ‘Cartoons’:

Often these forays into surrealism prevent the reader from being entirely sure of what’s happening. You think you know where a poem’s going, but there are layers of doubt and ambiguity, and it could all turn out a lot worse than you want to imagine. This reflects the situation the poems’ subjects find themselves in, with little to no control of what will happen next, or even whether they will survive their current job. In ‘Love’, one woman, Ash, holds off a stab wound with a laugh that becomes increasingly animalistic and dehumanised, while in the title poem, Crystal announces: ‘I refuse to compromise my safety,’ as she is in the process of ‘inviting strangers back to her room’ and, a line later, adds ‘there’s a safety in jeopardy, ain’t there?’ ‘She was lucky’, the narrator tells us, ‘never murdered, she understood erasure, turned it into/ artforms, pinned it to the walls’.

As this title suggests, there are moments of humour to be found in these poems too, although inevitably it’s dark. Much of it comes from Crystal, who ‘often throws in random facts’, is ‘always wanting the story’, and is one of the few women we become acquainted with, if passingly. Another woman, Trixie, declares:

However, such interludes of apparent levity are always tempered by what comes next. Trixie, it turns out, is a child, not a woman, and in the following poem, a punter, who claims he adores her, unashamedly details the way he exploits and degrades her.

In an interview with Abegail Morley of Against the Grain Press, Chaucer Cameron has said it took her thirty years to have sufficient emotional distance to write these poems. I, for one, am profoundly grateful she has, and that the song sung by Canary Wharf in the final poem of the collection is, for her at least, one of emphatic survival.

Deborah Harvey’s poems have been widely published in journals and anthologies, broadcast on Radio 4’s Poetry Please, and awarded several major prizes. Her fifth poetry collection, Learning Finity, will be published by Indigo Dreams in 2021. She is co-director of The Leaping Word poetry consultancy.