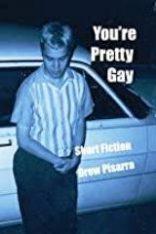 Think of Drew Pisarra as a stand-up comic delivering free-association monologues in a highwire stage act, balancing reality and fantasy. (For the record, he once toured a ventriloquist act entitled Singularly Grotesque, commissioned by the Portland Institute for Contemporary Art.) You will find very little dialogue in Pisarra’s brief, surrealistic stories. It’s mostly narration in Pisarra’s wisecracking voice, frequently a staccato rhythm that feels like it’s headed toward a punchline that doesn’t arrive. A random example – which highlights Pisarra’s implicit humor – is this passage from a story called “A Total Knockout”:

You’re Pretty Gay amounts to a kind of quest for identity, only, it’s not so much “What does it mean to be gay?” as it’s “What does it mean to be Drew Pisarra?” In story after story he traces his sexuality, much of it ribald and explicit. The epigraph from Gertrude Stein that prefaces the collection is funny, enigmatic, and wise and hints at Pisarra’s modus operandi: “If you are looking down while you are walking it is better to walk up hill; the ground is nearer.” Pisarra certainly keeps his nose to the ground, sniffing out his next move, the next thing that will finally give him that elusive sense of fulfillment we’re all looking for, that clue to the riddle of who he really is.

The fifteen little stories that make up You’re Pretty Gay range in tone from realistic to fantastic, frequently in the same tale. In “Arctic Chill,” for instance, a story that starts out realistically enough, reminiscing about his discovery of being gay, from fourth grade experiences to college to New Orleans, the setting where many of these stories take place, the city where he “came out.” But soon enough, in 1995, after a confusing HIV testing experience, he decides to flee, to “get away from it all in an extreme way.” And how! A friend with an airplane agrees to fly him “north.” Pisarra winds up with Mrs. Claus, Santa’s wife, who cryptically advises, “I’ve learned in my work with my husband it’s the importance of presents.” Presents? Or did she say “presence”? Impatient, dismissive, Pisarra, channeling his inner Scrooge, concludes, “Bah humbug!”

The final story is appropriately titled “Every Man for Myself.” This not only suggests Pisarra’s playfulness with language, but it crystallizes the essential impulse of his narrative, that quest for self-knowledge. The story ends with the reflection: “Oh, we all need something, don’t we? The question is, will we ever find it. I never did. Not in New Orleans. So where was I to go?”

Where to go? Down the rabbit hole with Drew Pisarra! Like the Cheshire Cat, he’s your guiding spirit on a journey that defies the usual rules of logic. It’s a strange, strange trip. As Alice says, it just gets curiouser and curiouser! Or, to quote Pisarra himself, in a story called “The Hat from Hell”: “I love traveling. I got this hat when I was in Hell back in 1992. I didn’t know that’s where I was going at the time and yet I’d made all the necessary arrangements. Hell takes some planning.”