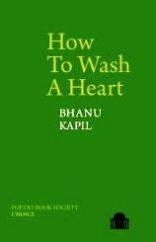 Bhanu Kapil, multi-published author, won the 2020 TS Eliot Prize with her first full collection How to Wash a Heart, a sequence of poems that reflect on hospitality in a society described as hostile to immigrants. Her poems address the limits of host-guest relationships from a neo-colonial perspective at the edge of language boundaries. As Kapil claims in the afterword, the composition of the poems in the collection was triggered by a photo in a newspaper of a white couple who had adopted a Philippine girl. Kapil describes the mother in the photo as having ‘taut muscles around her mouth as she smiled’, and she remarks that the way the woman portrays the experience is ‘ornate’, that is, it sounds artificial. Kapil explores and exposes this discrepancy between what is presented as inclusive and what is actually felt as excluding the other by means of a subtle constant discrimination.

The collection was also influenced by the present socio-political situation of detention and separation of families on the US-Mexico border and the repatriation laws in the UK. Kapil imagines a situation in which a white couple shares their home with a migrant who has a precarious visa status. At first, gratitude merges with a sense of obligation towards the host, but then the attempts by the host to control, monitor and eventually objectify the guest become increasingly clear over the five sections, which contain eight poems each.

The trauma of the refugee’s state of displacement is therefore reiterated and aggravated in the relationship with the host. The migrant is labelled an ‘ungrateful cow’, ‘a sexual object’ and ‘not an individual’, and the host claims that ‘[y]ou are here for my entertainment’. She is strictly observed, locked in the host’s home and is forbidden to go out with the host’s daughter.

The central section covers eight days during which the pressure on the guest intensifies, revealing the power of the coloniser-host that diminishes and reduces the colonised guest to a disposable object. The refugee is asked to tell her story to impress the neighbourhood in a mimicry of the role that is assigned to her. The relationship does not evolve and the guest resists the self-erasure that the experience is causing. Her split self questions the limits of the ‘host-guest chemistry’ and ironically suggests googling it to find out more. Kapil also claims that the ‘speaker is an artist’ whose essential need is the chance to express her creativity in a free way, which is denied in the present situation. Her survival as an individual and as an artist is therefore in danger. In order to avoid extinction, she needs to reaffirm herself in whatever fragmented form is required, perhaps even ‘[a]n alien form?’, she asks.

The two final sections of the collection explore and question the outcomes of the host-guest relationship, not only from the host’s and guest’s perspectives but from a broader view as well. Unanswered questions arise that are relevant to a wider human condition. Are belonging and identity eventually attainable? Is it possible to offer perfect hospitality? There is an ancient Roman proverb which notes that post tres saepe dies vilescit piscis et hospes (guests, like fish, stink after three days), highlighting how old the issue is. More complex concepts are at stake here. Pain and complicity mingle in Kapil’s neo-colonial implications of the host-guest relationship, suggesting that the human condition is a state of perennial displacement. Besides, it seems impossible to behave as a ‘perfect’ guest, though a space in which the artist-guest can feel free is longed for.

Furthermore, is it possible to heal after going through traumatic experiences such as dispossession and war? Can acceptance of different approaches to life be more widespread? In this perspective, Kapil also refers to Priyamvada Gopal’s seminal book Insurgent Empire: Anticolonial Resistance and British Dissent, which she read while she was writing the collection, (as she states in the acknowledgements). This book claims that the important role of the resisters in the British colonies was undermined and is not still acknowledged in the history of the insurgent movements and in the subsequent liberation of various countries from the rule of the British Empire. Instead, Gopal says, there is an established mythology that ‘abolition and decolonization […] are all too frequently regarded as deriving from the campaigning consciences of white British reformers or as the logical outcome of the liberal and liberalizing project that empire ostensibly always was, conquering in order to free’. The agency of colonial subjects is therefore diminished or even denied, confirming the objectification of the colonised guest expressed in Kapil’s poems. Paradoxically, the refugee is a ‘guest’ in their own country too, confirming their state of dispossession and displacement. The violence, exploitation and repression that they are subjected to are not acknowledged by the rulers as necessary for maintaining control. The ambivalence present in the coloniser-colonised relationship can therefore only be addressed through language. In Kapil’s poems it is the language of the coloniser that she uses in a process of transformation that relentlessly questions and unsettles definite rules, implying dissent, displacement and diverse approaches. As Kapil remarks in one of her interviews, poetry makes you ‘move through’, transit temporarily, evolve. In this context – and despite its vulnerability – the body resists the devastating power of the establishment.

A question recurs in the collection: how can we wash a heart? And does this refer to the guest’s heart or to the host’s heart? Maybe to both. Washing a heart implies renewal and purification, a journey towards a more welcoming society, that is, a utopian or idealistic vision where diverse cultural approaches become acceptable and coexist. This vision also refers to an installation, a performance the poet realised with her sister Rohini Kapil in 2019 in which people held ice cubes made of red ink in their palms and waited for them to melt. A similar image recurs in the poems as a metaphor for removing and washing a heart; this entails pain and renewal that inevitably interweave in a dream-like state that eventually ends in the nightmare of repatriation.

The final poem seems to seal the concept that the limits of hospitality, belonging or ‘unbelonging’, and the unlikelihood of happy relationships are all entrenched in the human condition, which implies suffering and imperfections.

The last word in the final poem is ‘revenge’: and repatriation seems to be the host’s ultimate revenge against the less fortunate, the brutalised, and the discriminated against.