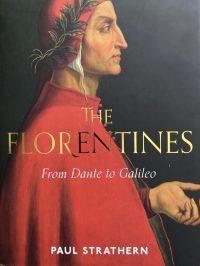 Paul Strathern is the modern equivalent of a Renaissance man.  A former mathematics and philosophy lecturer, he is an acclaimed novelist, as well as the author of books on history, science and economics.

That makes him more equipped than most to accomplish the daunting task of writing about the greatest Renaissance man of all – Leonardo da Vinci – and of setting him in the context of the other extraordinary individuals nurtured by the city state of Florence from the 13th to the 17th centuries.  They dominated not just the arts, but also diplomacy and political thought – Machiavelli – and mathematics and science – Galileo.

The flip side of the brilliance is barbarism.  It prevailed throughout the period as Florence was in a constant state of war, internally and externally, defending itself with armies of mercenaries, while within, the chasm between the wealthiest and the poorest and the jostling for power translated into corruption and extreme cruelty.

The question, which resonates with our own times of widening divisions and social volatility, is whether this tension was the great creative force that made Florence so central to the Renaissance, with its flowering of humanism and the development of experimental science that broke free of religious dogma.

“It is as if its jewels, all its crystalline wonders, could only be created in the crucible of a blast furnace: the warring city-states of Italy,” Strathern writes.

War was not the only catalyst.  Wealth was just as important – and artists, then as now, tended to rely on wealth generated by activities other than their own creativity.

In Florence, it was the great Medici banking family that patronised the arts at the same time as developing double entry bookkeeping and concealing their libri segreti, or “secret books” that told the real story of their colossal wealth that was inextricably linked to power.

With power came influence and networks at the highest level that helped to ensure Michelangelo decorated the Sistine chapel.

Another of the conducive realities of Florence was a certain amount of tolerance and freedom that meant the probable homosexuality of Michelangelo and of da Vinci would have been accepted.

The most notable obstacle to the outpouring of creativity was one character in Strathern’s array who was not a true Florentine.  The fundamentalist friar Girolamo Savonarola was born in Ferrara, but preached his visionary sermons in Florence, which was also the setting for his infamous Bonfire of the Vanities, reputed to have consumed such treasures as paintings by Botticelli.

Savonarola’s antipathy to secular art harked back to the medievalism of the start of Strathern’s period, but, for all its intensity, could not reverse the progression through artistic perspective and scientific reasoning that led Galileo to challenge the ancient “wisdom” of Aristotle, together with the Church’s world view.

We could be left believing in progress, but, for all his novelistic experience, Strathern does not succumb to the temptation of a crowd-pleasing, easy narrative.  Instead, what fascinates and compels us to read on is a welter of satisfying details that take us into the texture of the lives and personalities of the great Florentines.

We learn, or perhaps are reminded, that da Vinci was illegitimate, had a rough, country accent and lacked the education considered de rigueur at the time.  He also had what could strike as a modern, introspective personality.

“While you are alone, you are completely yourself, and if you are accompanied by even one other person, you are but half yourself,” he wrote in one of his many notebooks.

Most importantly, perhaps, he never considered his work complete.  The Mona Lisa smile is a work eternally in progress and he carried the unfinished portrait around with him so he could worry away at how to make her lips convey her innermost feelings.

Such emotions were heightened by his use of chiaroscuro, or light and shadow, which brings us back to Strathern’s salient theme of Renaissance light versus medieval night and strife and the abiding sense that essentially, mankind has not changed.