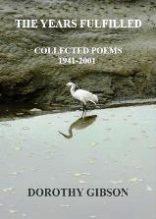 During her lifetime Dorothy Gibson published three pamphlets and from 1985 onwards her poems appeared in Southend Poetry, the annual anthology of Southend Poetry Group. Only one of the pamphlets is dated (Twenty-Six Poems, The Trevor Press, 1989). The Poetry Library catalogue suggests 1980s for Thirty-Six Poems (Fenn Press) but there is no information at all for Selected Poems (Blackbird Books). These small presses have closed, as small presses do.

Fortunately Dorothy’s daughter-in-law, Bernadette Gibson, faced all the difficulties of editing a posthumous collection and has brought together all extant poems into one volume. It would be impossible to ascribe a date to individual poems and this works to their advantage. The editor has been freed to regard the sixty poems printed here as a single body of work, not divided chronologically into sections. Thus the reader can set aside that inner critical apparatus—the instinctive habit of labelling poems as ‘early’ or ‘late’—and look solely at the poems. What emerges is a strong and consistent body of work.

Gibson’s overriding themes are the seasons and natural world, contained within a larger framework of time and mortality. She is an attentive and observant poet, conscious of the individual’s modest place in the universe. The opening poem, ‘Spring Holiday’, sets this out, balancing the vanishing present moment with the knowledge ‘there will be other springs’—

Not all of Gibson’s poems use full rhyme but when they do the result is unforced and aligned perfectly with the metre. When it’s as good as this it looks simple; it’s not easy, however, to maintain fluid natural syntax while letting the rhyme fall into place. She handles rhyme with such confidence that I can’t help wondering how many drafts went into the making of each poem. The collection contains two villanelles, written so fluently that it’s only on second reading that the form becomes apparent; in both, the subject is supported by the form, as in ‘Swifts on a Summer Evening’—

Constant circling and repetition: that’s how a villanelle works but here the reader experiences it first in the birds’ movements. Gibson frequently uses a sonnet form and, again, the sonnet structure has a supporting role, as though subject and form have come together simultaneously. Variations in rhyme scheme often allow her to bring in a questioning, thoughtful note in the sestet. In ‘New Year’ the octet shows a cityscape and dancing revelers –‘The new year came with sequins at her feet/ and moon dust in her dark and lustrous hair’ before the sestet shifts the tone to a rural setting;

The single sentence, combined with the long vowels in the rhymes, helps place this individual New Year within the long sweep of time.

Humankind’s impact, both on itself and the natural world, is a wider setting for these poems. Gibson is not a polemicist; when she addresses a political subject her poems are recognising, and questioning the continuing place of violence in human society. The Gulf war (1991), the Warrington bomb (1993), are specific events from which larger questions about ‘our common humanity’ rise in the poems—

The use of questioning enables Gibson to move from the particular to the more general, and to move from her own thoughts to engage with the reader. In ‘Magpie’ her description of this ‘Flashman of birds’ and the one ‘Brawling a war-cry/ in a sergeant-major voice’ moves, in the final stanza, to a comparison between the murderous bird and humankind—

The long poem, ‘The Years Fulfilled’, which gives the collection its title, is a four-part sequence addressed to her child. Internal evidence – ‘you that have known gunfire for lullabies’, ’Only a bomber throbbing’ – set it during the Second World War. Through the seasons Gibson watches her child, ‘…your eyes/ light up with childhood wonder …’ and celebrates not only ‘… the throbbing, vibrant pulse of life’ but the much larger cycle of living and dying, combining her Christian faith with a pantheistic vision.

‘Growing Up’ is a rare poem focussing on her own history; it takes a long view of her years between birth (1915) and 1945 (‘when at last the war was over’). It won the Essex Age Concern poetry competition in 1999 but its placing early in this collection is significant: these are the experiences that shaped Gibson, and underpin her whole work. Seven quatrains show her born into the sounds of ‘marching men/ moving overseas.’ and then the aftermath of the first World War—

Plain language, ballad metre, the distant ‘they’ who tell the children what to believe; all these contribute to the dutiful flag-waving, the complete absence of euphoria. The 1930’s is marked as ‘the shadow of a swastika/ followed each refugee.’ until the final stanza—

No complaints and, equally, nothing heroic; it’s a poem that speaks for a whole generation. Dorothy Gibson, however, established a legacy; she was a founder member of the Southend Poetry Group (still active), along with her husband, Douglas Gibson, a poet published by Cape in 1945. Poetry groups were a valued resource outside London; much mid-twentieth century literary history implies that poetic activity was centred on London, ignoring the variety of social organisations away from the capital. Cultural networks developed during the pre-internet age, with its rapidity of contact and freely available content, now feel remote.

Reading Gibson’s poems this year, I am aware how her central concerns are freshly relevant. Confined to our own localities, unable to travel or search out much by way of novelty, there has been a renewed interest in birdsong, the first green leaves, and the pleasures of a quieter world with less traffic. In ‘Silences’, she writes of the Pembrokeshire coast and ‘… silence as an extra dimension, a new perspective.’ While the early morning silence of home is broken by the arrival of the morning paper (‘… violence dropped through the letter box’) she identifies a new quality in Pembrokeshire—

What she retains throughout her life and poetry is a near-childlike sense of wonder; never sentimental, her recognition of humanity’s need of the riches of nature is close to Wordsworth’s. Bernadette Gibson has proved a sensitive editor and her way of placing these poems together, letting each one find a corresponding echo in its neighbours, reflects much of the nature writing I’ve read over the past twelve months as well as revealing Dorothy Gibson’s engagement with poetic craft. These are poems which have found their time and deserve a new audience.