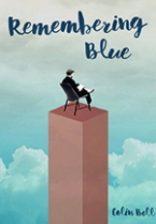 ‘Awakening from that death-like coma was a rebirth. When things were difficult, it helped to remember blue’. Colin Bell’s own comment guides the reader into a selection of poems that move between narrative and reflection, sharp fragments of recollection and ironic commentary, in which Bell addresses the experience of suffering and recovering from a brain haemorrhage. But the book also comes at a more widely appropriate moment, as our whole culture starts, we fervently hope, to awaken from the collective coma induced by pandemic and lockdown.

The opening poems engaged me immediately. ‘Four-Minute Song’ suggests a need to graduate from nostalgia, ’moving away from familiar rooms’. ’Ten Finger Exercise’ describes an obsession: the narrator’s compulsive counting of the letters that make up words on the fingers of his two hands. This poem stunned me; here I must confess that I suffer (and very occasionally get enjoyment) from a similar compulsion. And Bell expresses it so well, with elegant self-awareness:

(And I appreciate the fact that the ‘Frightened’ line has ten syllables, too).

Some of the most poignant lyrics spring from the poet’s reconnection with himself as a child. In ‘Razor-Sharp’, a door-to-door knife sharpener confronts the boy at home alone, giving a frightening glimpse of the adult world and its weaponry:

A questioning of ideas about masculinity and sexuality underpin many of the poems. For instance, in ‘Strangers on a Train’, Bell suggests with great subtlety the uneasy process of growing up gay in an intolerant culture:

Allen Ginsberg and his lover Peter Orlovsky appear in two poems, representing both the romance and the pain of gay and Bohemian culture in New York. I loved the optimistic O’Hara walk-style poem about strolling in Manhattan, ‘noon-enraptured’, with its iconic ‘labourers/up there, sky-high, washing windows.’

Speech rhythms and fragments give many of the poems a conversational tone, widened by a broad frame of reference which includes the fields of martial arts, opera, cinema and visual arts. (Bell has been, among other achievements, a TV director and producer of arts programmes). Some of the poems take an ekphrastic turn or address cultural history; a glossary at the end offers helpful explanations. Bell has fun with these references: a slyly transgressive ‘Odalisque’, posing on an ‘old chaise longue’, struggles to resist ‘the itch on restive buttocks’, and fantasises about seducing the artist. In ‘Miss Prism’s Handbag’, Bell ruefully sends up poets, himself included, at a poetry reading in Camden: ‘middle class liberals at prayer.’ Stopping into a bar on his way home, he is taunted by his ‘new Friday friends’:

There are also fluent and evocative travel poems. I enjoyed ’Outside the Cathedral’, set in Rome, and ‘Sicilian Vespas’, a witty aural pun on evening prayer and the ‘young men on scooters’ seen during a tai chi retreat in Cefalù. A sense of potential disaster hangs over the description of a tourist visit to Mount Etna, perhaps foreshadowing climate catastrophe, but also, I think, including the only use of the word ‘haemorrhage’ in the collection.

Bell’s descriptions of nature are complex. For instance, in ’November Landscape’, as much a portrait of the artist as of the landscape, the poet observes Sussex countryside through the eyes and ‘forensic brush’ of the painter Dawn Stacey. ‘Rosarium’, a sequence playing on the names of the roses in the poet’s garden, surprises at every turn, moving rapidly into a display of passionate and sometimes shocking imagery. These roses open into connotations of bloody warfare, plague, crucifixion, and climate change. Even in a lighter, shorter lyric such as ‘Gardening Tip’, the planting of bulbs becomes a metaphor for hope and uncertainty.

Bell can do understated too; he writes with great delicacy of loss and longing in the tenderly regretful ‘The Awakening’, and in ’Postcards’, with its hints of lost days in the sun. Later in the collection there’s an encounter with a small girl who takes charge of the convalescent poet, becoming his guide for a walk in rural surroundings.

Sharing her treaures, she offers a kind of redemption:

This is a rich and intelligent collection from a poet who takes nothing for granted. Despite the haemorrhage, his poet brain continues to work overtime. I especially like the final poem, which moves from Bell’s awakening on the ‘conveyor belt’ of intensive care to the moment when he gratefully accepts a doctor’s help.

Gold is a fine word to end on; here it’s not the elusive ‘gold rush dream’, nor the ‘acid sneer’ of forsythia, but an irresistible glow of healing and relief.