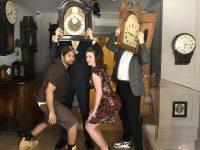 After a year of worrying about the consequences of even meeting a fellow human being, Grange Park Opera, with its unerring instinct for what its audience needs, sensed that few things could be more welcome than an hour of escape into Maurice Ravel’s gloriously light opera bouffe that allows a woman to juggle three lovers with impunity.

If anything, the illusion we can get away with errant behaviour is enhanced by a sprinkling of reality as Ravel balances his fluid harmonies with the tick-tock of time’s march and as the desires of Concepcion, the clockmaker’s wife, are convincingly down-to-earth.

Under Stephen Medcalf’s direction that brings humour to the fore, normality, as we currently know it, is established by the perfectly-chosen setting of Howard Walwyn’s exquisite clock shop, from which we look out to a traffic-free Kensington Church Street and watch the occasional mask-wearing, plague-fearing citizen walk by.

Within the shop, the only anxiety is what Concepcion, sung with great gusto by Catherine Backhouse, should do with her embarrassment of lovers during the all-too short hour when her benign husband Torquemada, sung by Jeffrey Lloyd Roberts, is away attending to the municipal clocks.

As if to add justification to Concepcion’s infidelity, her husband’s chief passions are clocks and food as he fortifies himself for his civic duties with an enormous cream cake from the neighbouring shop Sally Clarke’s patisserie.

His wife’s attempts to satisfy her needs are complicated and ultimately resolved by the unexpected arrival of “the muleteer” Ramiro, characterised as shy, modest and focused on the job in hand – indeed everything a lover should be – by the warm baritone Ross Ramgobin.

Uncomplaining, he sets to work moving around grandfather clocks according to Concepcion’s whim.

For him the task is effortless, even when the antique cases contain Concepcion’s useless poet of a lover, the lyrical Elgan Llyr Thomas, and Don Inigo the bass-baritone banker, played by Ashley Riches, who, in his efforts to ingratiate and surprise, traps his long frame in a not quite big enough clock.

Pandemic times mean the cast recorded their parts at the Wigmore Hall and mime their singing in the confines of the clock shop.  If anything, the result is to make them more attentive to their acting, while Daniel Zafer’s video production convinces us they are singing through the clock faces.

In reality, the return of Torquemada would be a moment of emotional devastation, but in the accommodating world of Ravel’s opera bouffe, everyone comes round to the conclusion, drawn from Boccaccio that, as the most effective lover, the muleteer must have his turn.

The result is an innocent, carefree mood of celebration as we conclude in pandemic fashion with a Zoom-style chorus of harmoniously singing heads.