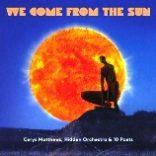 WE COME FROM THE SUN

WE COME FROM THE SUN: Sue Wallace-Shaddad leads us through an innovative album of poetry, music and sound compiled by Cerys Matthews

Cerys Matthews has collaborated with ten highly regarded poets and Hidden Orchestra to create this evocative album. This was clearly a labour of love and achieved during the most difficult of times for the creative industries. The interplay of the music with the poems and the way sounds are sequenced create rich seams throughout the album.

Cerys Matthews describes the album as ‘a journey, an aural adventure’. The title ‘We come from the sun’, is derived from MA MOYO’s poem ‘Flame Lily’ featured in the first track. This track has an incantatory quality with its steady hand drumming and percussive thread. It takes us back to the beginning of time. The repetition of ‘I come from’ reminds us of the power of storytelling across generations of women: ‘I come from the women who birthed the sun’. There is a recognition of ‘light and dark’ which foreshadows how the music in the album plays with and highlights the spoken word.

We move from sun to moon in the second track. Delicate piano notes, like falling rain, introduce the scene of a father reading to his deaf son. The listener is drawn into the scene and the relationship. The words make us consider how we need ‘to really hear each other’ even as we listen to the track. When the son (poet Raymond Antrobus) articulates his name as ‘Rain-nan Akabok’, and says ‘I’d like to be the Moon, the bear, even the rain’, the words, with the piano notes, enclose us in ‘rain’, a recurrent theme in the album.

In the third track, Lemn Sissay’s rhyme scheme adds a lightness to ‘the challenge, the flight, the adventure’ that he explores. We hear burning twigs, flowing notes, the rush of water. There is a sense of forward movement created by the xylophone, the possibility of flying free: ‘we are equal in dreams’. The game of football is a metaphor for struggle: ‘One game, one destiny, one goal’ with the sound of applause at the end. This leads in very well to the fourth track ‘She Strikes the Ball Like a Match’, featuring Cia Mangat’s short poem full of internal rhyme and assonance — loops of sound. The xylophone notes trip along as a player might with a ball.

Street noise and the sound of cars driving through rain starts track five. Harp-like notes join in, creating the sense of a car running. A minute later, the beat commences which continues throughout. This background creates the sense of an actual journey while we travel with the poet through a medley of thoughts, a journey of the mind and memory. Anthony Anaxagorou flits from subject to subject in his poem, much as a driver’s thoughts would come and go while driving a long distance.

The sixth track ‘And the Soul’ moves us from urban to more natural imagery. A muffled heartbeat starts the track, gathers pace then slows down again at the end. We hear the sound of walking through leaves, the call of birds and all these sounds flicker in the background to the spoken words. An atmosphere of echoes and unidentified noises creates a place where all manner of creatures may live. The poet, Kim Moore, suggests that knowing the soul is a matter of finding ‘what kind of beast is hiding’.

We stay in the countryside in track seven, now in Connemara. We hear a heartbeat again followed by rain and wind. In fact, there is a double beat, perhaps representing mother and child ‘for inside me you pulsed, / single celled, extraordinary.’ Liz Berry says of the rain ‘The drizzle / made sore music / of my nerve endings.’ The heartbeat finally gives way to a cacophony of rain and thunder, then fades into the distance.

Birdsong conjures up a very rural scene in track eight. The liquid notes of the clarinets, which accompany the voice, remind me of Vaughan Williams’ pastoral music. There is lyrical beauty in Adam Horovitz’s images, the past is seen as ‘a runic language / stitched, dyed and woven’. Track nine also opens with birdsong and then a distant shot. The sound of rain then forms the backdrop to Kayo Chingonyi speaking of ‘loch-side mist’ and ‘this moment is sudden rain’.

Track ten starts with the tinkling of a wind chime. A wistful saxophone adds a hint of the Middle East to Imtiaz Dharker’s sonnet about the fine line between a lover’s absence and presence. Her words are haunted by longing: ‘even your shade makes darkest absence bright’. Light also features in track eleven which features Liz Berry’s poem about racing pigeons ‘Bred to dazzlin in backyards by men’. The soundtrack evokes factories full of machinery and the clatter of someone dealing with pigeons. The sound of wings and humming ends the track: we feel we have also flown away.

The album ends with a Kim Moore poem which focuses on place, particularly through the dual lens of being by the water and in the rain. The trumpet, sound of rowing, swans or geese, suggest a busy picture of people enjoying a day out. The journey has come to an end.

Cerys Matthews, working closely with Hidden Orchestra and the poets, has deepened our experience of the poems included in this album. Sensitive use of musical instruments, electronic music and recordings of sound make these poems sing even louder.