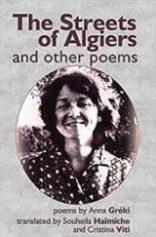 This substantial book is a translation of Anna Gréki’s second, posthumous collection, Temps Fort, published in Paris in 1966. According to Reverso Context, “Temps Fort” could be rendered in English as “highlights”, “key moments”, “strong moments”, “or important periods”. The data.bnf.fr. website lists the book title as Highlights, if the translation option is chosen.

The informative Introduction to The Streets of Algiers gives a personal and political history where we learn that her family was part of the ethnic French community living in Algeria prior to the independence struggle of 1954-1962. The Anna Gréki Wikipedia entry describes her as ‘an Algerian poet of French origin.’ She was actively involved in the struggle for Algerian independence as a communist and a feminist; consequences of this included being tortured and imprisoned.

Since my French language skills are limited, I cannot comment with any certainty of the veracity of the translation, but as far as I can make out, Souheila Haïmiche and Cristina Viti have done an admirable job. When I volunteered to review the book, I did not realise it was a translation, and perhaps I should have returned it, or asked a French-speaking friend to undertake the translation, but Lockdown got in the way.

The book’s opening poem, ‘July 1962’ takes its title from the date of Algerian independence, so the ‘You’ addressed in the poem, is the newly independent Algeria, and it is a love poem. This is typical of Gréki’s writing, where revolutionary communism and feminism are melded, often in the same poem. Here is stanza two

while the poem finishes

‘Autumn’ is as close to pastoral as Gréki gets, where stanza 5 has this to say

Memory, what we remember and how we recall events, is an important concept for this poet, and in the Introduction, we learn that Collo is a coastal town in Algeria, with ‘segregated beaches reserved to French settlers.’ Stanza 7 focuses on memories,

This adds another layer of meaning to the expression ‘comrade in arms’. In ‘Just Above Silence’, Gréki states ‘Happiness falls into the public domain’, once again addressing the basic question underlying her writing – what is the relationship between personal/political, and public actions in the context of a revolutionary struggle? The personal is the political in the most dramatic way. In ‘Notice’ the poet has this to say

Gréki’s country is Algeria, not France, even though she was educated at the Sorbonne; and she returned to Algeria in 1954 to take her part in the struggle. My reading of the ending of ‘A History Lesson’ is that it addresses the question of how to live as civilians in a post-revolutionary era.

This book’s title poem, ‘The Streets of Algiers’ is one of several longer poems, 27 six line stanzas in six numbered sections, where Algiers is initially personified as a man, but in section 5, becomes a woman. Among other things, this poem is a meditation on the position of women in this new world
of ‘big-mouth males’ in stanza 1, section 1,

while in section 2, stanza 1, the narrator observes that

then enquires in the next stanza,

The voice of feminist disillusion speaks out clearly in this poem, referring to the men in Algeria as ‘giaours’, a term glossed by the translators in the book’s Notes as ‘infidel, outsider’. And in section 6, stanza 2, we meet ‘This former Jean-François now known as Said’; opportunist and adventurer indeed; yet the poem finishes on a hopeful note

Chestnuts apparently were a staple food of revolutionary cadres in the mountains, and now these beardless youths have become men. In ‘Fresh Bodies of the Assassins’ stanza 3 reads

Once again we find ourselves at the point where the personal is the political for someone who is a feminist and a communist revolutionary. The poem concludes

Those readers with knowledge of the struggle Gréki was engaged in may well have an opinion on whether scores were settled during or afterwards. In section 2 of ‘The Andromeda Nebula’, the book’s closing poem, a response to Ivan Yefremov’s 1957 science fiction novel of the same title about a communist utopia set in the future, she has this to say in section 2

but in section 4, the focus shifts

while section 10 closes with a repetition of this stanza with ‘Andromeda my country’ added as the closing line. ‘To boldly go’ indeed. The Wikipedia entry on Yefremov’s novel suggests that it may have been an influence on the original Star Trek. It’s available on Amazon should you be curious.

The Streets of Algiers has a great deal to offer to lovers of French poetry, anyone interested in a poetry of social and political engagement, and to readers interested in seeing how feminism interacts with these concerns. As usual, one last thing; the book is a handsome and well printed artefact, with no noticeable typos.