Should we be in need of a reminder, lockdown has provided it: our appreciation of a work of art can depend on experiencing it in the context for which it was created; the vacuum of an online viewing is no substitute.

Bishop Bell of Chichester understood the connection when, at the height of World War Two, he combined his passion to revive a relationship between art and the church with a desire to give commissions to artists who were struggling to earn a living in war-time, as they are again in pandemic times.

The project he led for British artists Duncan Grant and Vanessa Bell – sister of Virginia Woolf and no relation of Bishop Bell – to decorate the church in the South Downs village of Berwick has come to be regarded as having “national and even international significance,” to quote art historian and curator Nicholas Serota. 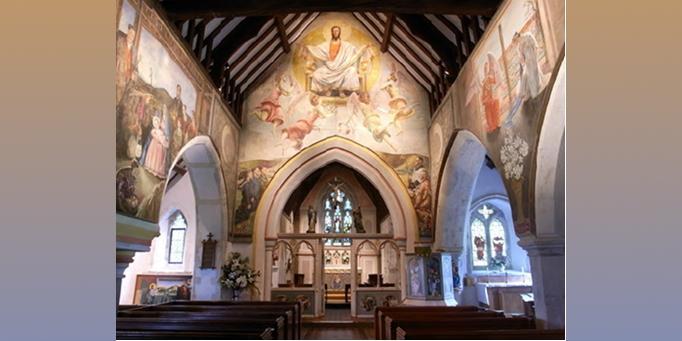 From the outset it was controversial.

Some parishioners objected to any decoration and others to the choice of modern artists.  However, a consistory court hearing in 1941 concluded Grant and Bell could cover the church walls with art in a way that recalls the Italian relationship between paintings and religion but is also rooted in Downland life.

As battle raged across the Channel and in the skies above the gentle Sussex countryside, Bell and Grant worked to create uplifting images that convey hope and a sense of natural order. 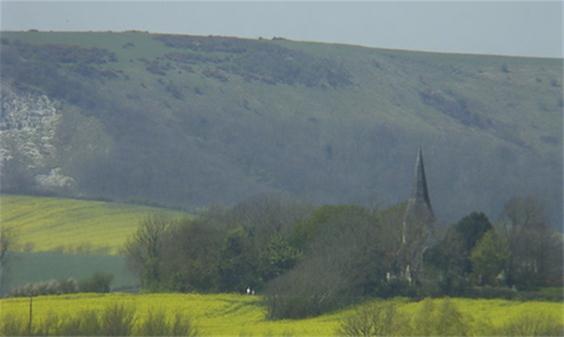 Grant was responsible for Christ in Glory, which depicts a blue-eyed Christ whose head is surrounded by a perfect circle of gold that recalls Byzantine and Celtic imagery.

Below the Christ figure, almost poised to leap out of the church wall from his powerful, out-sized feet, Grant portrays the contemporary earthly context.

On one side, he paints a sailor, an airman and a soldier to represent the armed forces.  His models were local men and the painting serves as a tribute and a war memorial.  The soldier standing to attention was Douglas Hemming, son of the station master, and he was killed in the fighting.

On the other side, the rector of Berwick stands behind the kneeling artistic and religious patron Bishop Bell in a rich, embroidered cope.

Grant’s work is centre stage, while the nativity and annunciation scenes painted by Vanessa Bell decorate the sides of the church.

Grant gives us muscular, assured figures, with a hint of pastiche, as critics have remarked.  Bell provides a graceful, sincere counterpoint, using Angelica, her daughter with Grant, as a model for the Virgin Mary.

Grant is also responsible for the Four Seasons – nostalgic visions of a progression from spring sowing to the rewarding labours of harvest time and trees laden with red apples to gathering wood in the snow.  The pictures have enduring appeal, but our appreciation is heightened as the restrictions of lockdown make us more attuned to the rhythms of the landscape that surrounds the church.

We’re also particularly responsive to the urge to escape.  The overall effect of Grant’s and Bell’s work is of charm and serenity.  We’re taken far away from the horrors of war, which the artists had personally experienced.  Bell’s tender depiction of the nativity was informed by her grief at losing her son Julian by her husband Clive Bell.  He was killed in the Spanish Civil War and Bell had also lost her sister Virginia, who committed suicide.

The contrasts between light and shade are at the heart of the current controversy surrounding the work.

Those opposed to a plan to replace the church’s dark pews and red and black Victorian tiles say they were part of the scheme envisaged by Bell and Grant; their gloom offset the light airiness of the paintings above.  They also say it is only because the building is a church that it is even possible to consider such radical changes to the interior decoration in a Grade I-listed building.  A clause known as the ecclesiastical exemption means that the rigorous processes in place to control change in any other Grade I buildings can be avoided.

Those who favour the modernisations say they are a logical improvement as part of the installation of underfloor heating to protect the restored art and also a new commission by Julian Bell, grandson of Vanessa, and to allow more flexible use of the church by the local community.

The church authorities say they are deliberating.  Once lockdown ends, visitors drawn from far and wide to inspect this unique example of a complete decorative scheme by artists of repute in a rural English church can judge for themselves.