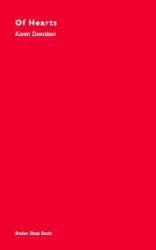 This pamphlet, Of Hearts, has great density of language, image and metaphor. The recurring themes and images link the poems together and create a powerful sense of attraction. As a reader, I was caught by the almost gravitational pull of the poems which expose an inner world often explored through aspects of outer space including the sun, moon and stars.

In the first poem ‘At Point Nemo’, Dennison uses the extended metaphor of a spacecraft falling into the sea to set the narrative framework for the course of a relationship. Initially she ‘circled earth’ then she was ‘knocked off course by junk and debris’. After meeting someone, she started to believe she ‘was back in high orbit’ and might escape ‘gravity’s grip’ but she has ended with ‘nothing but the cemetery to break my fall’. I like the way she also mines cultural allusions in this poem with references to ‘Ra’, ‘Mir’, ‘sunken city’ (with echoes of Atlantis) and ‘Point Nemo’ itself (a point in the ocean for ‘the so-called Spacecraft Cemetery’, according to the footnote).

A feeling of closeness to something bigger than ourselves — the universe, the earth, the sea — runs throughout the pamphlet. The poem ‘Toward eternity’ captures a sense of the poet being surrounded by ‘limitless dark’. She writes ‘the sky denies me its stars’ and ‘I am small as a stone’.

Grief is featured explicitly in many of the poems. It can be risky for a poet to use abstract terms like ‘sorrow’, but Dennison finds a way to use this word to good effect. In ‘Between the lines’ she considers white space as being where she ‘unwrote sorrow’s wrist’, an arresting image which harnesses the steady drum beat of an alliterative ‘r’. Using sewing as an extended metaphor, she comes to the conclusion that her ‘empty lines’

In ‘Winter’s story’, Dennison suggests another dimension to darkness with the image ‘station lamps planetary in blackness’. The narrator lives in a kind of half world ‘on the edges of things’. Mid-poem, sorrow is personified as someone who brings snow and wants to show ‘the opposite of warmth, the end of love’.

Lack of light also occurs in ‘After you’re gone’, a moving poem expressing loss where the poet situates herself in an extra-terrestrial context: ‘I scour dead light’ and ‘blood-dark space’. The poet is faced with the enormity of space and the unknown.

In the poem, ‘Moon song’, the first four stanzas follow fairly time- honoured ways of anthropomorphising the moon, albeit with some striking images; but the poem turns to a much darker place at the end, totally consistent with the broad themes of the pamphlet:

Light and dark are explored to great effect in ‘Hollow hours’, a poem about sleeplessness. The poet is caught in ‘tunnels of night’. Behind the moon’s face, there is only

And in the last stanza even the sun cannot really be relied upon: ‘the sun’s long fingers […] conjure illusions/of light, make me forget’.

In ‘Epicentre of Longing’, Dennison uses geographical imagery to describe the path of yearning. A series of active verbs emphasizes the continuing power of the emotion with short tercets providing a jagged edge to that sense of longing. In ‘Between cloud’, Dennison adds compound words to provide variation as well as visual stimulus: ‘Shadow-black’, ‘leaf-light’, ‘blue-glow’, ending with a rather beautiful image for grief:

The poem then focuses down on an image of the sun which ‘pierces’, ‘needles’ and ‘pins me to each moment/like muscle to the bone’ in the final couplet. It feels as if there is no escape from pain.

‘At the edge’ is an ekphrastic poem responding to artwork by Linda Arkley. Loss threads through the images of clouds, sun and water until the moment when the narrator disappears: ‘your hand slips in mine, pulls me under’. This is another example of immersion in the unknown. On a brighter note, the poem ‘Here again’ starts with a gentle image linking the sea to stars:

Dennison then combines the senses in images such as ‘our sun shook like a tambourine’ and ‘The scent of jasmine was restless as a swallow’. This poem is full of memories and, unusually for this pamphlet, celebrates the light.

Of Hearts is rich in imagery and with each re-reading of the poems I felt bound closer to its themes: the grief of loss, darkness and light, our place in the universe.

The Once and Future Moon St Michael and All Angels Church, Berwick. Review by Barbara Lewis.