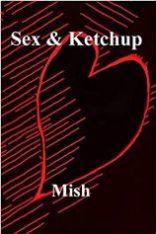 Poetry review – SEX & KETCHUP: Charles Rammelkamp finds this collection by Mish is as intriguing as its title promises…

The virus hangs over everything in Sex & Ketchup. It is both real and a metaphor. “If things go upside down…” begins:

Though not overtly political, the poem ends with another oblique reference to Donald Trump: “an odd / old man / with / an orange tan.” But, malignant as the former president was, he’s only symbolic of a larger reality, which all too often manifests as death.

The virus is front and center in “Pandemic,” the first of the six sections that make up this intriguing collection. But when we get to Part 2 – “Tiny Dancer” – we read about the death of the poet’s father. “Wish You Were Here” is addressed to her deceased father: “Dad, I wish you were here during the pandemic.” While “each day since your passing kills me,” she observes at the conclusion of the poem, “I look on the bright side like you taught me, and, at / least, crying doesn’t attract the virus.”

The sixth and final section of Sex & Ketchup, “Scissors,” alludes to the death of her mother. “She passed away/ last year”:

We also read in this section about the tragic drowning of a younger brother in a nighttime surfing accident. The penultimate poem in Sex & Ketchup, “Plots,” takes place in the cemetery. Death is the great, insidious virus.

The three middle sections, Parts 3, 4, and 5 – “Inflatable Doll, “Watch Out” and “Sex & Ketchup” – take us to a sort of alternate world of horror movie/scifi-like situations, with allusions to Frankenstein, the X-files and even, implicitly, to Jordan Peele’s Get Out, surreal, dangerous dreamscapes. “Space Aliens” begins “The aliens land on our roof / & ask my mother pleasantly, // What time is it?” Similarly, in “Scribbled on a Card from an Alternate Universe,” a poem from the “Pandemic” section, a girl in college writes messages to her mother about “the virus” and the situation on campus: “By afternoon, all our professors had morphed into human- / sized grasshoppers.”

“Rumpelstiltskin” is a riff on the Brothers Grimm’s tale of the imp who spins straw into gold in exchange for a girl’s firstborn. The poem develops Mish’s own inner imp (“a wee Rumpelstiltskin / inside me”) into “a nasty lady / called ‘Evil Me’.” Evil Me shows up in a subsequent poem called “Message from Evil Me” and is somewhat like a personification of “virus.”

“An Evil Dragon” is another poem that focuses on an alien menace, a fantastic mythical beast that’s a metaphor for something devious and malevolent.

“Inflatable Doll” is related in the voice of a blow-up sex doll (“so hard-working men / won’t need / human women / who might get the virus”). The doll may also be weird on its face but the poem gets at the dehumanization of society that itself seems to have gone viral, just as “Gun After Gun After Gun” shines a light on its manifestation as violence run amok.

“Witching Is Not What It Used to Be,” a humorous, if unsettling, poem in the “Watch Out” section, brings us back to this root corruption, meditating on the spells they cast

The odd, surreal picture of the world that Mish paints may be summed up in the poem, “Sifting Dreams.” She writes “It’s a difficult trip from the underworld up to dreamland.” Reality is scary and malleable.

Which brings us at last to the question: How is sex like a bottle of ketchup? In the title poem, at the center of the collection, Mish tells us that one day

Even our sex drive is a casualty of the metaphorical virus. But, with sly humor, Mish (aka, Eileen Murphy) goes on: “But to hell with ketchup. // Try // peppering // your meat.”