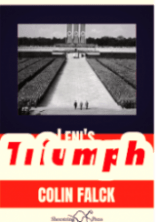 A reading of Colin Falck’s exact, and often exacting, criticism makes clear his ‘manifesto’. If poems are to matter it will not be enough to have a light on, there has to be someone at home, and the someone has to be experiencing what is written about: daily things and what it’s like being alive. Leni Riefenstahl, who died in 2003 aged 101, directed much of the contemporary film of the Nazis, extracts of which we still see. She began as an apparently heart-stoppingly beautiful dancer, ‘a high-climbing actress’, in silent-films on ‘the redeeming purity of the mountains, the sordidness of the low’ (‘Early Leni’) and she switched to directing when the talkies overtook her. Her transition from actress to director is the theme in ‘Leni’s Blue Light‘:

Falck has written that the test of a historical poem is ‘its felt life, not its truth to facts’. In American and British Verse in the Twentieth Century: The Poetry that Matters (Ashgate, 2003) he states that in any attempt to exhume material on the Third Reich, ‘it is only if we can find answers to the central question of how far the Nazis were like the rest of us that there can even be any point in conjuring it up at all.’ His subject was a work by W.D. Snodgrass, but it follows that the poems in the title sequence of his new collection are heavy both with facts and felt life, and that Leni had attributes of the artist but with additional ‘Wired-in worship: what has really always been there’ (‘Leni’s Triumph’).

It may be worth adding that any poems on the subject are likely to struggle under the weight of the importance of what they’re trying to say. In ‘Leni’s Olympia’ the complex filming of the Games in 1936 Berlin is shown to be revolutionary ‘probing into obscurity’, in which a back-cloth of repression and atrocity is concealed by ‘a regiment of women’ in ‘gymnastic patternings’:

Her manipulation of her doomed subjects in ‘The Gypsies’ is also accompanied by dance, in which an ageing Leni participates: ‘They are stand-ins for all dreams of untamed life, all undefiledness, / all truth…’ Then later, as ‘a nation’s scapegoat’ after her work remained banned in Germany, she could film only ‘a dying African tribe, some fish on a reef ‘ (‘Leni’s Defence’). In this, the final poem of the sequence, we find her explicit claim: “I want to see, that’s all. This is my life. I want to see”. The narrator’s final flourish is the nearest we come to a salute:

To see and to be there, necessarily recalls to us Falck’s ‘manifesto’ for poetry mentioned above. He’ll remind us it’s only Wordsworth, updated, a person speaking to persons rather than delving into a single mind for images or maps and then using them all – but what is surprising is how few exponents of it we find in contemporary verse. Falcck’s book on American & British Verse (cited above) presents a challenging analysis of the many ways in which poets ignore even these basic requirements, which makes it all the more necessary.

Leni’s Triumph is a collection presented in two halves: a partly autobiographical account of the poet’s war years and after, concluding with three likeable extravaganzas in the Far East, followed by a selection of recent work. Set apart at the beginning, preceding part one, is a short piece entitled ‘Message’. The speaker returns, six decades later, to a run-down building in an empty street where a garage door is inscribed, ‘HITLER IS IN HERE’. The children play nearby. There is no apparent straining after metaphor or significance, only the simple fact:

If even graffiti survives into a new century, what chance might there be of Leni’s hard-won films losing their effect on a civilisation that develops new and very specific forms of madness? Only one other poem is allowed to set the scene before the title sequence: the six big six-line sprung rhythm pentameters of ‘Model Village’, with carefully pitched end-rhymes, shows us 1938:

It might be Larkin but for the end-stoppings, but it’s also an extended punch-line after five carefully-wrought stanzas describing what might be anywhere. We only have to try to capture tranquility to appreciate how difficult it can be. Again, no reaching for meanings but finally an observation that falls into clear view. Then comes Leni. After which this same stately form will be reprised four times to tell a familiar story ( from ‘Not much happening for a year’ to ‘stay calm; keep your head down, wait for the time to go’). In four impressive steps called ‘The Phoney War’: ‘Devon’; ‘Home’ and ‘No Call’ the speaker is carried from childhood to National Service. On the way, a short three-poem sequence about being ‘Ten’ gives an account of early schooling during war and a handful of National Service poems will affirm, as in ‘NAAFI Break’:

This poem amounts to confirmation that any small pleasure will be burned into the memory as near epiphany if it is surrounded either by pain or by not very much at all. Others on the subject resemble those of Henry Reed with similar, if more direct, playfulness:

The second section of the book opens with a short piece on choral church music that alludes to a hunger for what earlier has been described as ‘wired-in worship’:

This final sentence will return later, when Heidegger quotes from Holderlin (‘Heidegger Explains’) to become in a way a book-mark for the second section and for the collection as a whole. Other poems affirm a variety of ways to seek heavens or gods:

or again, there are the famous photographs, taken by a famous Victorian uncle, of:

If these passages seem to be relentlessly hammering a point it is partly because they are taken out of context. They support moving poems laced with factual detail, in some ways perhaps the best in the collection –– except that another half-dozen fine poems (‘cataclysmic interludes’ would be the hard sell line) make up the final act. These, combined with a dozen shorter pieces clustered around a two-line aphorism sent to the author by the playwright Leonard Webb, create an unsettling mood. ‘The world changes / Enabling you to die’ is quoted in ‘To Blake and Nietzsche’, giving the poems the feel of ‘Last Songs’ – and they contribute to an acceptance of all that is the case – from the immigrant ‘Green Parrots’ of Surrey to the final poem, ‘Weeds’ (at Auschwitz), each poem striking a different end-note from the manageable to the truly frightening.

There are two ‘Green Parrot’ poems (the second is in prose) offering a thinly disguised slant on immigration. The faux naïve speaker wonders why ‘the friendly sparrows have all disappeared from London’ although he has already declared that the parrots ‘do not care about our ways’. It’s the kind of bird-watching I always warm to for its casual dropping of surprising facts. The second prose piece lays out the rationale behind all the possible reactions to invasive parrots. ‘America’ finds a native American watching the depletion and degradation of a continent by comparing the old and the new ways, but it’s more dangerous: ‘Everything will be picked clean’. Since the poems involve a standing back, a glance through the wrong end of a telescope, his take on ’11th September 2001′ is proportionately disorientating. To find patterns, we are told:

The towers are stood in the poem beside images of Rome and the thousand-year Reich before ‘collapsing clean through themselves’, an image that is then repeated immediately:

This chastening vision precedes one showing an ‘East-Berliner’ crashing into a concrete block whilst failing to break through the crossing-point in 1985. His girl-friend lived in West Berlin. An attempt to respond to ‘the strange museum’ at Auschwitz-Birkenau, ‘Weeds’, is perhaps a study in how to circumnavigate the truths displayed there. Three ten-line stanzas mainly in pentameters work to place the remains of the camp in its authentic geography:

The middle stanza remembers two million souls and their ‘irrecoverable voices’ before the final one shifts focus, as a camera might:

The brave mix of emotions, the symphonic ending, are partly fuelled by a kind of recklessness (which may be a readiness Hamlet referred to) and partly by a wicked sense of irony. But it’s the ‘wicked’ the kids once used as a matter of course, when they really meant ‘marvellous’.