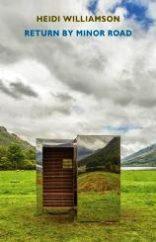 Poetry review – RETURN BY MINOR ROAD: Abigail Ardelle Zammit reviews a collection by Heidi Williamson which looks to the natural world as a means of a healing memories of a tragic event

Heidi Williamson’s third collection, Return by Minor Road, is less a revisiting of the Dunblane Primary School shooting, than a sensitive and subtle reflection on the culverts and rivers within the human body that carry the past. Through a lexicon that is coloured by Scottish inflections (‘thrawn’, ‘cairn’, ‘drookit’), terse versification intensified by assonantal and consonantal patterning, and a sense of place etched through the vocabulary of return – ‘waiting for the water to come back’, ‘the past is falling on the house’, ‘letting the past back in’ – Williamson weaves her delicate sonata of loss, upheaval and natural resilience.

The first movement – quiet, measured, but suspenseful – lets the reader in through its cumulative focus on bodies of water: movement, change over time. The collection’s secret is the gentle metaphor – not the sensational collocative term, but the knowing that comes gradually to light. When in “Thrawn” we read that ‘[s]ome houses are lifted, / some begin to blacken / as the water-level reaches / into each cell of stone’, or that ‘[a] skeleton could deflect / the water with its body’, we know that the language has found its own ethics of place, choosing transferred epithet and euphemism to write about the unspeakable. So in “Loch Occasional”, ‘the silt of what happened rises / and drops with the level of days’.

In the second movement, the pace is quicker, the style more experimental, prose poems, found poems and white space expressing the shock and dismay of that moment in time when everything changes and even language fails. It would have been easier to dwell on images of gore and bloodshed, but the verses take their own ‘minor road’, the word ‘blood’ only featuring once in the whole collection. The children are named individually in ‘Elegy’, each name occupying a dignified space, and the rest subtly conveyed through images from the natural world. The snowdrop – in reference to The Snowdrop Campaign whereby gun-ownership laws were amended – is a ‘rootless lily’ carried like ‘the country’s Olympic flame’ and a shy hare, ‘Lepus timidus’, a descendent of Hughes’ ‘Snow-Shoe Hare’, is trembling ‘like any terror / you can fall through – into the past’ (“Hare”).

By the third and final section, we know that place is not simply a geographical territory that humans inhabit, but that momentous events which occur there become part of our DNA:

Despite the perennial presence of communal pain, Williamson has faith in the natural world which holds within it all that is necessary for healing and regeneration. Now also a mother, she can pay homage with simple and heart-breaking clarity: