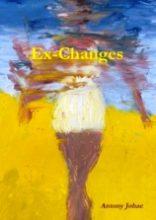 I know Antony Johae to be an intelligent, meticulous and skilful poet, and in this recent collection he impresses with his strong and individual style. Johae’s voice is undoubtedly his own; although born in Chiswick, his antecedents are Anglo-German and his is a distinctly European voice.

This is poetry as reminiscence, or reminiscence as poetry. Johae explains in his introduction “This volume contains poems and short prose pieces written in the late 1960s and during the 1970s; for more than thirty years they were left untouched.” His re-evaluation of the originals has led to some of them being transformed. “This revision is one of the reasons for my calling the collection Ex-Changes.” The poems run largely in chronological fashion, so that the reader progresses from the poet’s childhood through youth to his adult life, while noting the changes of experience and emotion along the way. There is indeed emotion, even though often expressed with a cool detachment. In ‘Scenes at a Funeral’:

Now, “we … shovelled earth / lay roses down to die,” is such an acute observation. I’ve not thought of funeral flowers in that metaphorical way before. A few pages on, in the prose piece ‘Brief Encounter’ we detect some Gothic humour, a certain coldness maybe, even though “it was hot that night in Schwabing.” An attempt at a romantic encounter is scuppered when the girl with breasts like snow-capped mountains says “I don’t see how Thomas Mann was influenced by Dostoevsky, es ist überhaupt nicht möglich”. The poet gets up to go, feeling “If Nature or God or Fortune had wanted it, she had thwarted them: she shouldn’t have brought up Dostoevsky.” How quickly was the poet’s ardour stilled! So much for Dostoevsky; later on Baudelaire himself turns up, with a ‘Reason for Parting’ expressed in unrhymed tercets. Johae’s cool romanticism surfaces with ‘In the Theatre Pit’:

I am in sympathy with the poet; at a classical concert I might well get diverted by musing on the possible relationships between the players. This particular exchange of smiles took place at the theatre rather than at a concert, but it still diverted the poet’s attention away from Nestroy’s play. ‘In the Theatre Pit’ is one among many of Johae’s compositions en bref, each with a slight sting in the tail, and often referencing a particular literary figure or philosopher, or perhaps an exotic location. So, ‘The Gash’:

Johae is also his own philosopher, for example ‘We Used To Swim Here’ in which he confronts his deep sense of loss:

There are six parts to this collection, the section titled ‘Academic Openings’ consisting of a number of pieces which are associated with the “University of E….x” as Johae coyly puts it. He achieved his PhD At Essex; the campus there exhibits a Brutalist architecture that fills a natural valley:

Even while situated securely in the southern reaches of East Anglia, Johae retains his Mittel-European sensibility and wistfulness – but he is soon off to Russia, in ‘For Léna’:

And of course he knows his Kafka. ‘Old Mole’ commences: “I had read Kafka / about his burrowing towards love / meeting a stone / going back / filling in the tunnel he had dug / not knowing where to go”. The poems in this collection represent a significant achievement of erudition and remembrance, deeply thought and truly evocative. At the end, Antony Johae writes an epilogue in which he appears to be seeking peace: “I needed to be / away from the traffic noise / I wanted provincial calm” but we are left with an enigma. Was this idyll never to be?

Perhaps we might discern here a neat circular connection with the opening poem ‘Changes’:

Reader, I conjure you – read this book of exceptional poetry, and then read it again. Each reading will reward you.