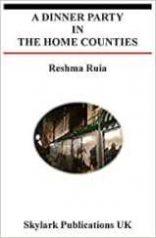 Poetry review – A DINNER PARTY IN THE HOME COUNTIES: Emma Lee credits Reshma Ruia with being able to spot and to use the small but telling details of a social encounter.

Reshma Ruia has an eye for discovering a detail – which might be a conversational phrase or an image that creeps into peripheral vision and stays – and can play with it to create a vignette that’s lively and conveys a recognisable scene but from a slanted angle so readers are asked to look again and pick out what they missed from a quick glance. A dinner party sounds informal and fun but it’s also a place where people jostle for status. The home counties are of course the counties around London; but the use of “home” also pins this as somewhere to relax, somewhere welcome. In the title poem, someone has to ask,

The opening question may seem like a casual conversation opener, but the implication is that ‘you’re not from around here’ and the follow up ,’Originally?’, will be familiar to anyone whose appearance or accent doesn’t fit. The questions have already identified the person being asked as other, so it’s a tricky one to answer, particularly if the answer doesn’t comply with the questioner’s prejudices. While the person being questioned becomes treated as a minority, what she does and how she behaves is scrutinised for evidence of her otherness, whereas the other guests are not subject to such scrutiny. The poem concludes,

The speaker is not going to be pushed to the margins or ghettoised under a label that implies her work isn’t good enough to be considered alongside mainstream arts.

Not all the poems are about the experience of being Indian and British (Ruia was born in India). ‘It is a Poet’s Fault’ visits an affair started by a man quoting a poem until

The man hid that he was married until he decided the affair would end. His mistress has been twice cheated: firstly by the deceit that he was available when he wasn’t and secondly by being denied a say in whether the affair should end. She finds herself pushed away with a gentleness that implies he’s done this before. But he blames poetry and doesn’t take responsibility for his actions. Perhaps he views heartbreak as poetic too.

‘A Conversation with Sylvia Plath’, notes that her grave is ‘a shrine of sorts’,

The list of items starts as generic, ‘paper roses’ ‘a postcard’ and becomes more personal to Plath’s life, a reminder she was married to Ted Hughes. The image of him smiling with his face in her hair is intimate, the ‘bouncy gold’ suggests hope. But a ‘red ribbon blooms’ is a sign of unhappiness to come, particularly when it becomes ‘a drop of blood’. The image of the church appears contradictory and sets up the contrasts between the pieces of advice Sylvia Plath apparently offers, ‘balance while falling’, ‘stand still while burning quick’. (The latter could be a reference to a quote on Plath’s headstone, ‘Even amidst fierce flames the golden lotus can be planted’.)

The poems in A Dinner Party in the Home Counties contain a sense of playfulness and energy. But Reshma Ruia also uses her accessible conversational tone to convey serious points and encourage readers to look at how we treat and relate to others.