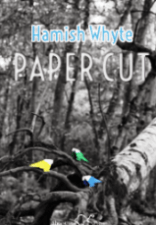 Poetry review – PAPER CUT: Richie McCaffery enjoys the approachability of Hamish Whyte’s poems – but warns the reader not to underestimate them

Paper Cut is Hamish Whyte’s fourth full collection from Shoestring Press, and all four collections have been published in a timespan of just twelve years (and that’s not to mention some pamphlets too). While Whyte, who runs the award-winning Mariscat Press in his adopted Edinburgh, is a dynamic editor, publisher and anthologist, it hadn’t quite struck me until now the scale of his poetic industry or the depth of his quiet but fervent dedication to his art.

On the face of it, Whyte’s subject matter is comfortable and domestic. There are poems of mellowing into older age and embracing the role of a loving grandfather (‘Collecting Freya from School’). There are memories, some golden, some slapstick, of a not exactly straitened post-war upbringing in suburbia (‘Tales from Old Suburbia’). There are no confessional excesses or horrors here. The form the poems take is in the main conservative – some lyrical pieces, some rhyme with the occasional forays into stream-of-consciousness prose-poem (‘Now the Robin’) and a few more experimental pieces of concrete poetry like ‘woodwindwindow’ and ‘Switch on the Waves’ which had the dubious honour of appearing in Private Eye’s ‘Pseuds Corner’. To quote the closing line of ‘The Creel Path’, ‘We kept / the beaten track beaten’ and Whyte is a poet content to make a home for himself in well-charted territory.

Whyte’s poetry is hospitable, he invites the reader in with wit and clear language to a place where they want to linger, if not bide. There is humanity here in spades. Take, for instance, the startling but perfectly-pitched ending to ‘Accommodation’, a poem where the poet as a boy wonders about the friend of his ‘Granny’s sister Mina’ whom he called ‘Aunt Edith’:

Just because something is already explored and mapped doesn’t mean that we’ve exhausted or even discovered all there is to say on the subject, and this is Whyte’s great virtue as a poet. Like his beloved robins, which he likes to watch from his window, his keen eye is trained on small, fugitive things, or as Wordsworth had it, ‘spots of time’. Few poets have the empathy and alertness to be able to come up with ‘Where’s Jemima McGregor?’, where the speaker sits in an osteoporosis waiting room and hears the nurse call repeatedly and in vain for ‘Jemima McGregor’. With a knowing and slightly Scottish nod to Larkin’s (another poet adept at illuminating the ordinary) ‘Mr Bleaney’, when Jemima fails to come forward, ‘Mr Blainey’ is hailed instead:

These poems have a spiritual strength and emotional grandeur that belies their humble form and register, each poem underpinned with love for family, for a partner, for a moment. ‘Editing’ is an unlikely title for a touching love poem, two people brought together by their shared love of words, of poetry:

Humour abounds in these poems too, though it’s often with a distinctly Scottish slant which tends towards the deflationary. Whyte’s drollery is never at the expense of someone else, in fact it’s often at his own, as the little vignette ‘Douglas Dunn’ from ‘Moments with Poets’ shows:

Edwin Morgan was, I think, a mentor for, and major mainstay in, Whyte’s life and in the formation and early success of Whyte’s Mariscat Press. Morgan effectively treated the press as his Scottish publisher, and he’d long looked for a good Scottish publisher (as his 1962 essay ‘The Beatnik in the Kailyard’ shows). Whyte repays Morgan’s faith in him fully in some of these poems. With the characteristic archness of some of Morgan’s own poetry, Whyte’s ‘The Robin’s Complaint’ has this to say:

Like Edwin Morgan, Whyte had a Classical education and wears his erudition beguilingly lightly and deftly. Perhaps the comical ‘Morgan on the Organ’ sums of much of what I really enjoyed about this collection. It’s the account of a bizarre dream that Whyte’s daughter had involving her father and Edwin Morgan reciting a poem while Morgan plays an accompaniment on the organ. Many poets might laugh at being told about such a dream and then forget all about it, but Whyte’s skill is in seeing its significance, in honouring the fleeting and often quirky aspects of our lives by rendering them into memorable and moving art:

Whyte’s persona in his poems is one of a modest and unassuming observer and occasional participant, happy to be alive and grateful for what he has or has had. I began this review by saying that Whyte’s poems occupy a familiar terrain and are disarmingly domestic and approachable. But to underestimate his work on these grounds would be a mistake. The distant past might be a turbulent place where ‘you could have / your ears cropped / for publishing / seditious pamphlets’ but the speaker of ‘Paper Cut’ managed to cut his finger badly on a page of his own poetry pamphlet, ending with the ‘pleasing’ realisation that ‘the printed page / can still do damage’.