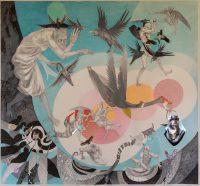 Isolation behind the Berlin Wall allowed the Leipzig Academy of Fine Arts to stick to a rigorous discipline of teaching figurative art, while ignoring the western temptation for a freer, more abstract approach.

A generation of artists that blossomed internationally after the fall of the Wall on the basis of the virtuoso draftsmanship it was taught by an earlier generation of Leipzig masters is loosely referred to as the new Leipzig school and its poster child is the internationally exhibited and highly collectible Neo Rauch.

A fellow pupil of Leipzig master Bernhard Heisig is the artist ANTOINETTE, who uses only her first name written in capitals.  In common with Rauch and other Leipzig artists, she combines meticulous representation with the fantastic or surreal.  Her fabulous creatures, as she depicts a struggle between the forces of good and evil, have earned her the nickname “Madame Bosch”.

The epithet places her in a centuries-old European tradition and the 64 year-old has devoted her career to depicting her vision of Europe’s cultural identity in a cycle of works entitled Mythos Europa.  As the continent of Europe was named after a woman Europa, a Phoenician princess, beloved by Zeus, king of the Greek gods, her work is also about female identity.

It culminates in Altar der Europa (Europa’s altar), a 13-part work, or polyptych, 5 metres high and 20 metres wide, all drawn in pencil (she needed more than 1,500) on paper.

While ANTOINETTE painstakingly shunned the high-tech, lockdown means that her work is brought to us by drone and YouTube.

So, we see from on high the moment when Altar der Europa is raised by a team wearing masks in the Baroque salon of Merseburg’s Schlossgarten, around 20 miles west of Leipzig.  For ANTOINETTE, it was the first time she had seen all 13 parts together.

She uses her phone to capture the moment of unification, which has resonance for an artist who lived through the reunification of Germany and has stated her fears for Europe’s integrity.

While anxiety simmers on the Continent about the future of the European project to ensure enlightened peace, island Britain says it has a whole world with which to connect, but it could find itself facing isolation that may or may not foster creative solutions.