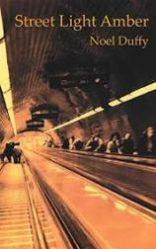 It is tempting to see a road traffic metaphor in the title (and one of the preoccupations) of Noel’s Duffy’s compact collection Street Light Amber – stuck between the red of a relationship ending, and the green of sporadic resumptions. Pause to assess conditions, perhaps, or more positively proceed with caution. But the title takes the reader off in a much less pedestrian direction.

Amber is the mood of many of the poems, reminiscent of that sort of dusky half-world most people walk through to get somewhere else – a noisy, well-lighted bar, perhaps, or home to the family – but in which Duffy revels with a photographer’s eye. It is sepia in many poems: “by the canal bank … the lit/stairwells of the apartment blocks opposite/quivering strips on the water’s surface” (‘Sodium Orange’); “we lay silently in bed, our anger spent,/till the morning light gathered/in the curtains” (‘That Afternoon’).

There is no nostalgia to these scenes, nor are they simply backdrop to the playing-out of more meaningful emotional dramas in the limelight. Instead the finely-grained and the gritty, nailed down in telling detail and subtle image, become a means of entering the larger story of the book, pushing what appears to be its key concern (an undoubtedly fine exploration of a dead-then-possibly-resurrected relationship) into second place. Rather than illuminating moments in a foreground relationship, that relationship adds depth and poignancy to the poet’s real love story – with the city.

It is everywhere: from “the clues/and runes of misspelt addresses” in the poem-preface ‘Department of Dead Letters’ (picked up at the close, in identical form but re-titled ‘Erase. Rewind. Start Again’, and routing us back to an image of nurturing love in the bowels of the city); to ‘Shopfront’ with its reflected river journey, “the crimson and white chimneystacks/of the power station marking its course to the sea”; and “the Park and malt-house and gasworks buildings,/the iron-grid roads and apartment blocks beyond them” in ‘The Forest’. The recurring, almost obsessive quality of Duffy’s urban setting is perhaps best understood in ‘Eclipse’, where daily commuters and the poet’s on-again, off-again couple pause in the eerie darkness. Though the cessation of day to day activity is a human phenomenon, Duffy chooses to register its impact in a wonderfully light, glancing natural image – bright and apt, but also reinforcing the packed, smoky density of the rest of the book:

It is almost as though the thick hurly-burly of the poet’s city can be stilled only by action on a planetary scale. As the poems progress, and the nature of the central relationship becomes more complex, riddled with doubt and second-guessing, the imagery shifts from direct depiction of elements in the crowding city to depictions of images of those elements – primarily photographs. Take ‘A Haunting’, whose material recollection of lost love develops this theme:

Or ‘Figure in Sunlight’, a late poem reflecting on the poet’s mood in which the positive image of a familiar female figure becomes a tabula rasa, a future empty of definition:

The third of these lines is ambiguous – will the poet hold the photograph still in his hands, cherishing it (though he seems happy only when his beloved has been erased), or hold it still into an ongoing and endless future, whose attachment to the past suggests limited compositions of new happiness to come.

In these moments – bookended by identical poems framing the life of the city as a yellowed parchment bearing “a cursive script but no return address,/the love so carefully expressed, now his and his only” – we are invited to understand that some loves are played out in scenes between people, confused and repetitive, whereas a deeper love between viewer and eternal subject plays on a loop (‘Rewind. Start Again’). We are left in ‘Darkroom Notes’ with the poet observing the past bleeding through, becoming the future, and the reflection real as its object: