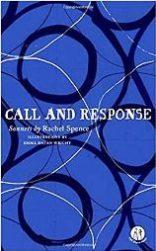 Poetry review – CALL AND RESPONSE : Alex Josephy reviews a sonnet sequence by Rachel Spence which deals sensitively with a mother-daughter relationship during illness

Rachel Spence’s sonnet sequence explores a relationship, by telling a story. Thirteen sonnets chart her mother’s illness and recovery, through the experiences and responses of the daughter. Both live to tell the tale; the drama is in the small bruises, reconciliations and intimate moments along the way.

Spence is known for her writing on art (for the Financial Times and elsewhere), and has a previous pamphlet and collection published by Templar. She clearly enjoys the possibilities afforded by writing in form; searching for some of her recent work, I found lockdown haiku and an interestingly fiery ghazal. She herself has commented: ‘The more emotional you feel, the more form becomes your friend as a poet.’

This small volume bears her out. It feels as though it comes directly from the heart, despite the formal constraints Spence has chosen. Her sonnets don’t adhere too strictly to the rules, for example moving fluidly in and out of iambic pentameter. When such a line occurs, it’s like one of those instances in life when you realise you’ve heard the postman unintentionally speaking an iambic line, or you find that you’ve explained something to a child in five iambic feet.

The other classic feature of a sonnet, the ‘volta’ or turn, is also present in a flexible, unshowy way. They don’t necessarily occur where you might expect them, but here and there, tell-tale words such as ‘but’, ‘and yet’, ‘and once again’, are slipped in to shift the course of the poem.

The sequence is not a sonnet wreath or crown; the most obvious links between one poem and the next are chronological, as in a journal, each sonnet starting with a date. The sequence moves from a ‘Prequel’ in 1976, toward a central section of significant moments during 2013, the year of the mother’s illness (almost certainly cancer), and ends in a ‘Sequel’ written or set a few years later.

What I admire most about these poems is their combination of honesty and irony; they show the uneasy passion of a mother-daughter relationship with all its contradictions and absurdities. The daughter is intensely aware of her mother’s physical presence, powerful and vulnerable, as when she follows her after a car breakdown:

The connection is compelling, and possibly dangerous (addictive?):

and at times, causes a kind of claustrophobic distaste which perhaps exists only between mothers and daughters? I don’t know, but as both mother and daughter myself, I recognise it, in the mother’s:

As in a love affair, repulsion alternates with attraction. In one sonnet after another, ‘once again, we’re on.’ These fluctuations are beautifully handled. Early in the sequence, the poet is lost in a reverie about her actual lover:

Her mother’s phone call is at first just irritating, but she quickly senses an emergency; the Springtime imagery takes a darker turn:

Later, when the mother is at home convalescing after a spell in hospital, she asks her daughter to care for her. The way I read this poem, it is as if the daughter approaches her role as nurse fortified by her very ambivalence, a sensitivity which make her the only one capable of the task:

In a short sequence, these poems track a significant journey in which the daughter acknowledges her mother’s spirit and influence on her own character. In a hospital bed, the mother is proudly ‘lipsticked and cashmered.’ There’s a growing sense of resistance and solidarity. Cups of tea are a bond, as is ironic humour (‘the way we both hate spring’). They play with words and references (reworked lines from Hamlet, Rachel’s name picked from a Biblical text). At one point during the cancer treatment, they adjourn defiantly to:

Reflection on their Jewish heritage adds depth to the mix. Feeling relief when the operation has gone well, the poet sees how her mother has impressed the nurses, and is reminded of family and wider cultural history:

Avoiding over-emphasis, this poem takes a tonal leap to end on a note of rueful comedy:

The process of hospital care, convalescence and then radiotherapy unfolds in sonnets that combine the wit, containment of fury, and tenacity called for by serious illness. A meeting with the consultant becomes a game of poker. A visit home where the mother seems ’wag-tail happy’ is deconstructed by the daughter who quickly intuits her mother’s real unease:

In the final sonnet in the central section, the mother is discharged by ‘the doc’; the daughter pays tribute to her, wondering how she might measure up to ‘…your stoic heart? Your gift for loving men? That blowtorch smile?’ And in the Sequel, five years later, she is in the garden and it’s summer, as in the first sonnet, and there is a closeness that might still be too close:

But there is also a tea ceremony (and by implication, her parents’ marriage) that has lasted sixty years, and there are the daughter’s passions, partly inherited, partly of her own invention: ‘caffeine, love and words.’

Call and Response is an interesting title. Who calls, who responds? In the opening poems, the daughter is disappointed when her mother refuses to help after the breakdown of a relationship. It’s supposed to be a lesson, to toughen her up:

Later, it’s the mother calling for assistance, the daughter responding, unable to resist. I’m reminded of the image of the mother as a baby bird. It’s that time between parent and child where the balance of need changes, when the roles of giver and taker, caller and responder, are called into question.

Looked at another way though, almost all the words here are the daughter’s. She is the one calling, naming what happens and what it might mean. Perhaps in that sense, the response is the solace she gains from writing, or even from our reading of her work. And I do recommend that you read these poems. They offer consolation without pretending to arrive anywhere more conclusive than a stop along the way. Nature and nurture are both shown to have a hand in the process of constructing identity, a process that continues, of necessity, through the most difficult of times.