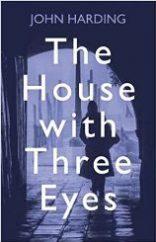 The House with Three Eyes

THE HOUSE WITH THREE EYES: John Lucas encounters a page-turner in John Harding’s atmospheric novel about mysterious events in Venice

John Harding is a writer of many parts. I first came across his work when I read Dreaming of Babylon, his informative biography of that oddball poet, Ralph Hodgson, now all-but forgotten, though in the early years of the twentieth-century, when T.S. Eliot famously found him ‘pleasant to meet,’ his poem ‘Time, You Old Gypsy Man, featured in many anthologies. More recently, Harding published a fascinating account of theatre work in Edwardian Manchester, Staging Life: The Story of the Manchester Playwrights, centring on the work of Stanley Houghton, whose Hindle Wakes was for years a repertory favourite, as was Hobson’s Choice, by Houghton’s contemporary, Harold Brighouse. Not surprisingly, perhaps, Harding is the biographer of Shelagh Delaney. Rather more surprisingly, or so it may appear, he is also the biographer of the footballers Billy Meredith and Alex James. But then it turns out that he is the authorised historian of the Football Association as well as the British Boxing Board of Control. Hence, his Life of the boxer, Jack ‘Kid’ Berg. Enough, already.

But no, not a bit of it. For here is his first novel, subtitled ‘A Venetian Mystery.’ It’s a good subtitle. The House With Three Eyes is no ordinary crime novel. There are suspicious goings on, including death, but no detectives, private or police, are among the dramatis personae, and although some very odd characters appear – including a former rock star, now a druggie has-been, as well as artsts of various degrees of pretension – none can be thought of as providing the novel’s focus.

This is instead dispersed about the city of Venice itself and its watery environs as seen through the eyes of a young woman, Stella Butler. She is a graduate student studying the Lagoon’s ecology, who intends a lightning visit to record by photographic means various of its changes and the decay caused by the predations of tourism. Accordingly, her visit is planned for the dead time of year, when few tourists are about and the city can be seen in all its decadent grandeur. Stella’s is the innocent eye of the wondering outsider, the camera eye that records the city’s mysteries.

These begin as she boards her plane at Stansted. A far older man, plainly ill, is also wanting to join her flight. She recognises him as a famous and successful artist, Harold Foster, once a ruthless womaniser, now enfeebled by age. In the kerfuffle to board, her shoulder bag gets mixed up with his, and by the time the plane arrives in Venice, Foster is dead. What happens thereafter, why Foster should have wanted to travel to the city, who is supposed to be meeting him, why they should want to do so, the reason(s) for the interest in his movements, the people who Stella finds herself increasingly tangled with, constitute the mystery that opens, like an intricate origami design, as the novel progresses.

To open this out is not, I think, the reviewer’s business. It’s enough to say that The House With Three Eyes is a page turner, or, if you will, a mystery of many twists and turns that require a great deal of unfolding before it comes to its provisional conclusion. It would, however, be impossible not to comment on the intricate narrative ways Harding finds to present Venice itself, ways so resourceful that, even were there no mystery, the novel would still be well worth reading. In some respects, indeed, The House With Three Eyes is a remarkably effective travelogue.(I almost wondered whether a map of Venetia shouldn’t have been supplied, but then decided that not quite knowing where you are is part of the novel’s effectiveness.) To put it differently, The House With Three Eyes resembles one of Eric Ambler’s novels of the nineteen thirties, all of which have as plot device an Englishman in foreign parts – often aboard a train – journeying into unknown, mysterious, and threatening European cities. Still, analogies take you only so far. There is less of a threatening atmosphere in Harding’s novel (which doesn’t mean it’s devoid of a sense of danger); but the atmosphere of watery, wintry Venice is very well evoked as is the mysteriousness, to Stella, of the people she meets. Artists, wannabes, has-beens. Venice as the supreme city of decadent delight and decrepitude? A variation on Roeg’s remarkable film, Don’t Look Now? Or, even, Thomas Mann’s Death in Venice? But again, there are differences. Harding has no truck with the rather stagey horror of the film’s ending; nor with the morbid pathology of Mann’s novella. ‘Ecology’ the dictionary says: ‘The study of the relationships between living organisms and their environments.’ It would hardly be inaccurate to call Stella an ecological student of the Venetian world she finds herself in. As for her author, his skill is in evoking the strange, grand, and in some ways sinister uniqueness of a place in which no single point of view can possibly account for the ecology of so much beauty, so much corruption.