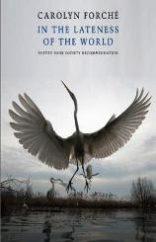 Poetry review – IN THE LATENESS OF THE WORLD: Carolyn Forché’s dense and imaginative poems prompt Michael Bartholomew-Biggs to a spot of introspection

Carolyn Forché’s rich and measured poetry sometimes reveals to me that I can be an impatient reader. The opening poem of her new collection In the Lateness of the World is called “Museum of Stones” and in it she offers lists of mineral types – ‘… schist and shale, hornblende / agate, marble, millstones …’ – along with an itemization of where they might be found – ‘… battlefield, threshing floor, basilica, abattoir …’ As I write these lists down I must go relatively slowly and can appreciate their rhythms and musicality. But at my normal reading pace my eye wants to slide over the single words looking for the gratification of “meaning” to be found in the mini-narratives of whole lines such as ‘stone from the silvery grass near the scaffold’. There is a serious point here that is not just about my fickle attention-span. Forché is so sensitive to the breadth and complexity of what she writes about that she refuses to diminish it by offering a single token example or a glib and flashy description or a too-easy simplified analysis. “Museum of Stones” is like a comprehensive catalogue to a (fictitious) collection and it invites you to browse it slowly both for the sound of the words and to allow wonderfully allusive lines such as ‘schoolyard stones in the hand of a corpse’ to work on our imagination.

By contrast, the next poem “The Boatman” is – or is to be taken as – founded on fact and verges on reportage. It puts words into the mouth of a Middle-Eastern refugee now working as a taxi-driver in a Western city. He begins his complicated tale using rather high-flown rhetoric until he suddenly interrupts himself

Ugly reality cuts across the previous rambling but elegant digressions of the driver’s tale. Both sorts of narrative, however, are expressed in the long flowing lines that Forché uses almost exclusively in the first part of the book. But the challenge of reality does not end with accounts of the past. The dialogue between driver and passenger continues with ‘You tell me you are a poet. If so, our destination is the same.’ But how many poets can face and accept the loneliness and responsibility implicit in this statement?

Refugees like the taxi-driver are sometimes in flight from natural calamities and “Report from an Island” reads as if giving a drone’s eye view of sufferings caused by climate change, plastic pollution or the purely human tragedy of a plane crash. The gloomy reports are tender and haunting

You will need to read the poem yourself to find out where and why ‘Many graves now have light and running water.’

There is further contemplation of lives under stress in “Letters to a City Under Seige”. Forché is widely known as a “poet of witness” – a label that some might use too glibly without really considering the emotional depth which Forché’s poetry can reach and the cost involved in reaching it. In this poem she speaks of wanting to use language that can be ‘understood by children who make bulletproof vests out of cardboard’. Vulnerability, innocence, hope and resilience are all contained in this image. And they are present too in these remarkable lines

Something of the impatience I spoke of in the beginning rises up in me again as I read such poetry. Surely someone with such compassion and originality of imagination can see through the world’s intractable woes and find a solution. Surely these poems contain clues to the answer…? No. They are poems and their job is to stir us into seeing fresh ways to approach the human problems that surround us – especially those which are within our reach.

The collection also includes poems with a more personal focus. Some seem to be heightened memories of actual experiences and “The Lightkeeper” is one of these. It is a wonderfully atmospheric poem which describes being taken to a lighthouse on ‘a night without ships’ by someone who was ‘pulling me by the hand, so I might see this for once in my life’. As with many of Forché’s poems there is much left unsaid or enigmatic like the injunction to ‘stay awake, be like the lens maker who died with his lungs full of glass.’ But there is also the same meticulous attention to detail that we saw in “Museum of Stones” as the poem gives a carefully weighted enumeration of the many fuels that have fed the light over the years – ‘ … whale oil and solid wick, colza and lard, kerosene and carbide …’

“Exile” is equally personal but more likely to be fantasy than fact. It imagines returning to ‘the city of your childhood’ and supposes

Once again those extended lines are perfect for the slow weaving of a sense of ghostly presence. (The change of tempo and a greater sense of urgency are very noticeable in when the poet switches to a shorter line in “Travel Papers” and “The Ghost of Heaven”.)

One wonders what the truth is that may be buried in this fragment, just as we have already wondered about the oranges smuggled into the besieged city or the lens-maker with glass-lined lungs. One senses that very little in these poems is exactly what it seems. The viewpoint is oblique, as the poet herself declares in “Charmolypi” where, speaking of small birds living in the eaves, she tells us ‘to see them one must not be looking’. And yet, especially with the poems about injustice and suffering, (but also in the many poems written for friends as memories and tributes one) she must have a very special way of ‘not looking’ that goes with a deep underlying honesty.

This is a review that could be considerably extended if I commented on every intriguing detail or quoted every memorable line. Let me simply say there is much more to be found in this complex and dense book; and not all of it is easy to take in at first sight. But persist: this is a collection in which something rewarding will strike you afresh at each re-reading.