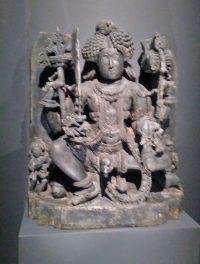 Tantric culture and tradition are as alive as ever today, as the comprehensive and exhaustive exhibition at the British Museum shows.  From the seventh century AD, Tantra adapted its revolutionary ideas to Hinduism and Buddhism, spreading throughout the Indian subcontinent and in Japan.  This philosophy was open to marginalised groups such as women, who, through Tantric initiation, gained power and enlightenment.  In this perspective, wisdom and compassion are cultivated in a conversation between male and female elements that are personified in gods and goddesses.

The feminine is central in this thought and is known as Shakti, which merges maternal elements and sexually charged power.  It is considered to be a divine power that is embodied in different goddesses.  These goddesses fight demons and grant freedom from them to their devotees.  They challenge the traditional passive role of women and open it up to new possibilities of spiritual freedom and inclusiveness.  Therefore, goddesses are crucial to this practice; they can transform themselves into animals such as birds, snakes and tigers and express their highest power in a divine sexual union with a god.

The exhibition displays a rich collection of stone pieces, bronzes, paintings, painted fabrics and books that testify to the different stages and evolution of Tantric thought in different countries from 600 AD.  For example, the Hindu deity Bhairava became Mahkala in Tantra, and a group of poet-saints composed songs for this god, rejecting the social role of obedient wives.  Bhairava is shown holding severed heads and a sword or carrying skull cups, which symbolise a ferocious attitude but also the overcoming of fear and self-attachment.  The goddess Kali is the main personification of the female’s regained and renovated power, a creative force that gains supreme dominance by performing sex.  The sexual rite is central to Tantric culture’s challenging of taboos, such as bodily fluids, and its confirmation that everything is sacred.  Therefore, the body is a way of achieving enlightenment as well as spiritual meditation.  Wisdom (prajna) and compassion (karuna) can only be achieved in a sexual union that defies greed, pride and hatred; in Tibet this was known as yab-youm (father-mother).  The various images in the forms of statuettes and pictures on display were used to support meditation and inspire the Tantric beliefs.

During the British rule, the image of Kali in posters and in the form of wooden statuettes was reconceived as a force of resistance and independence.  Anti-colonial revolutionary movements drew strength from worshipping Kali because of her audacity in challenging conventional rules and because of her disruptive qualities.  The daring and ferocious images of Kali, with her red tongue sticking out of her mouth and her drinking her own blood symbolised the heroic fearlessness and vitality that confronted British dominance.  On the other hand, Tantra was considered to be the manifestation of black magic and sexual depravity by the evangelical missionaries and the British government.

Yoginis (female yogis) were important figures in Tantric culture.  They gained power from their body, displaying complex poses and practising breath control.  This engendered self-discipline in the path towards enlightenment, which implied ascetism as well as erotic qualities.  Tantric masters were very popular; they engaged in sexual rites where the body was this supreme place of bliss in a transcendence that comprehended desire.  Therefore, sex, life and death are connected in Tantra and are indivisible.  The physical and the spiritual merge (‘tan’ means weave or compose) in a new vision that is disruptive and transgresses social conventions, defying the distinction between purity and impurity.

The Tantric texts were studied in monasteries in Tibet, which contributed to establishing the roots of a countercultural movement that spread in Europe and America in the 1960s and 1970s.  The last part of the exhibition depicts this development really well in art, music and mass culture; it had disruptive potential at social and political levels.  These movements were inspired by the anti-capitalist, ecological and free-love features inherent in Tantra philosophy, in its rebellious spirit that connected with hippie movements.  Yogis became role models for liberation and were linked to the culture of ecstasy provoked by LSD and cannabis, or hashish, sold legally in Nepal until 1973, when President Nixon put pressure on the government, which then outlawed it.  Modern posters and pictures inspired by Tantra show its enduring vitality and the appeal that this ancient thought still has today.  It not only produced an encompassing view of the spiritual and physical union of male and female elements but also supported rebellious views that led to the independence of India.  Its global contemporary development reveals the actuality of its vision.  In recent times it has inspired feminist artists as well as musicians such as Mick Jagger.

Tantra’s dramatic and thought-provoking unification of sacred and profane, mind and body, spirituality and eroticism, compassion, wisdom and ferocity envisions different ways of thinking about the relationship between mind and body that leads to unexpected transformations.  ‘There is no being that is not enlightened, if it but knows its own true nature’, recites Havaya Tantra, a statement that is opens to everybody.  Religious and social taboos are therefore overcome and reconsidered in an unbounded view that might look anarchic or lawless but nevertheless allows wider explorations of being human.