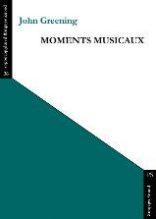 Those who have enjoyed John Greening’s earlier collection, The Silence, or indeed any of his other excellent books, will be delighted by the arrival of Poetry Salzburg’s pamphlet, Moments Musicaux, which, again, reflects Greening’s appreciation and deep understanding of music.

Poetry that focusses so strongly on a single topic always risks leaving some readers out in the cold, and there are times in this collection when, despite my life-long love and practice of music, I thought a little more guidance would not have gone amiss. Do we need to know the music about which he writes?

However, as soon as one asks that question, one is brought up sharp by wondering how much exterior knowledge is needed in the rest of the canon; and the answer must surely be that it cannot be essential. We do not need any particular foreknowledge of mental breakdown to appreciate The Waste Land. Nor is it essential to have visited the Suffolk countryside to warm to Crabbe, or to have deep personal spiritual experience in order to be deeply moved by Donne. Indeed, it is through the work of these poets that we come to a deeper understanding of such topics; and it is therefore a pleasure, in the case of Moments Musicaux, to be led through a concert of musical themes with such an accomplished poet.

Nevertheless, explanatory or enlightening notes are not unusual in poetry, even if in general one would prefer that poets did not follow Eliot’s example of ‘Notes on the Wasteland’, that famously exceeded the length of the poem itself. There were a few points in Greening’s book where I thought that a short note might have further enhanced the reading of the poem. In one instance where Greening does, in fact, have a footnote, the note itself raises further questions. At the end of “Hoffnung”, we read

I have no idea what amusement the bricklayer’s barrel might have elicited in some readers, and find such references to stories that are not then shared tantalising to say the least. Is the reader meant to follow up the reference with a spin through Google? Similarly, a reading of the fine poem, “Romeo and Juliet”, might have been even more evocative if we had known to which of several musical scores the poem was referring. Having said that, this is a particularly striking poem, moving effortlessly from the music, through the dancing of Markova, to the history of Eastern Europe in the late 20th century.

There are two poems based on Schubert’s song cycle, ‘Die schöne Müllerin’. The more directly referenced one, “At the Wheel”, bravely employs end rhymes throughout which, for this reader at least, rather failed to reflect the subtlety of Schubert’s work. The less obvious one, “A Song Cycle”, is a gem, and captures the excitement of discovering this particular music when he was young:

I find I want to quote the title poem, “Moment Musical” (page 39), in full, because in its simplicity and controlled emotion, it is so beautiful. Here, all the feeling is funnelled into one poignant musical moment, rather than a broad range of moments:

There are several other deeply moving, poems, such as “Alive Alive O” (page 36) in which the poet remembers those who used to sing around the piano with him, but who have now died:

Several well-known musicians are celebrated in the book, including Evelyn Glennie, Ralph Vaughan Williams, Bruckner, Strauss, Sibelius and Sir Colin Davis. There is also a variety of forms in the collection, including a prose poem, an impressive concrete poem (“String Theory”, page 10, in the shape of a violin) both rhyming and free verse, a nursery rhyme treatment of “Oranges and Lemons” and, possibly the most striking, the form of a musical fugue in “Fugue: After Arioso Dolente“. This highly imaginative and skilful experiment in fugue form is dedicated to the poet Anne Stevenson; and it was a piece of dramatic irony worthy of a poet that I first read it just hours after I’d heard of Anne’s death.