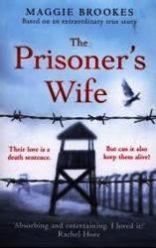 Book review – THE PRISONER’S WIFE: this remarkable novel by Maggie Brookes is based on a true story and tells of an almost incredible deception successfully carried out during World War Two

The last novel that I reviewed for London Grip involved some improbable and wholly imaginary events taking place in the Vatican (https://londongrip.co.uk/2020/04/virgin-child/). The Prisoner’s Wife, by contrast, involves some seemingly improbable events but is actually based on a true story that was told to author Maggie Brookes by an eye-witness.

The action takes place during the closing stages of World War Two. Bill is a British prisoner of war being held at a camp in occupied Czechoslovakia. He is part of a gang sent to work each day on a local farm. (It was only the officer class who might have a chance to spend their captivity playing cricket and digging tunnels!) While labouring in the fields, Bill meets and falls in love with Izzy, the farmer’s daughter. His feelings are reciprocated and in spite of many obstacles (not speaking each other’s language, Bill being taken back to the prison camp every night) they are able to enlist the sympathy of a local priest who secretly marries them. The couple then attempt to escape together to join the Czech resistance. (This is not so foolhardy as it may sound because the Russian army is approaching and it might be safer to be among Czech partisans than in the hands of the Germans when any fighting starts.) Unfortunately Bill and Izzy are caught by the Germans; and it is at this point that they attempt the daring imposture of passing Izzy off as a British soldier suffering from shell-shock who has lost the power of speech. This deception is made a little easier by the fact that Izzy, like many Czech women, has taken to dressing in male clothes in the hope of escaping the brutal attentions of the Russian soldiers when they arrive.

The dramatic events outlined above occupy the first few chapters and bring us, we might say, to the point where the story really starts. The most gripping parts of the book occur once Bill and Izzy are back in a prison camp and living with the minute by minute possibility that Izzy’s secret will be discovered. These chapters are unbearably tense as we follow the couple through their strategies for concealment which are sometimes planned and sometimes hastily improvised. Sometimes they are just plain lucky to get away with it!

The story is told in two voices: one belongs to a fairly omniscient narrator and the other is Izzy’s. This works well in giving us a context for events in terms of things that Izzy couldn’t possibly know while also enabling us to experience very intimately the fears and indignities that a woman would suffer in such a situation. And in some of the happier parts of the book Izzy is able to be quite frank about her feelings for Bill and about the intensity of their love-making.

Frankness is in fact a feature of this story. Most action adventures rather gloss over the more mundane aspects of life which must, in reality, punctuate any human enterprise however dramatic. Thus we never see James Bond go to the lavatory. In this story however, it is in the course of such basic functions as going to the lavatory, taking a shower or having periods that Izzy is at her most vulnerable so naturally they have to be talked about. Maggie Brookes is to be congratulated for facing up to this and making a good job of it.

Brookes is also to be congratulated on her cast of supporting characters. Most notably, the small group of fellow-prisoners with whom Bill and Izzy share their secret are all well-drawn individuals and we can empathise with them as they follow their own trajectories through the novel. Interestingly, Izzy’s pretence of being mute sometimes puts her in the role of being a perfect listener to whom people can talk freely; and in this way we learn more about the back stories of the men who surround and help to protect her. Brookes creates believable portraits of other characters too, ranging from Izzy’s family and friends to several of the soldiers and camp guards who personify examples of both the archetypal “good” and “bad” German.

It might have been difficult for both writer and reader to have the last two-thirds of the book entirely set in the claustrophobic atmosphere of a prison camp. But real life provided a further dramatic twist. As the war approached its end German prisoners of war had to be moved back to Germany from camps in occupied countries like Czechoslovakia. These transfers were done by means of forced marches over several days. The real couple on whom Brookes has based her “Bill” and “Izzy” did have to take part in such a march. In terms of the story told in The Prisoner’s Wife the reader’s anxieties are now shifted from worry about the keeping of a secret to wondering whether Bill and/or Izzy will even survive. Brookes has done a good deal of research and conveys well what it is like to walk twenty kilometres a day on little or no food and seeing fellow-prisoners literally fall by the wayside. The book’s final “will they/won’t they” cliff-hanger might possibly be regarded as one twist too many … but when real life can provide such seemingly implausible plot lines what right has a reviewer to argue for restraint?