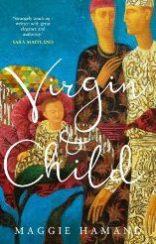 Virgin & Child: Michael Bartholomew-Biggs is intrigued by a new novel by Maggie Hamand in which a theological conundrum leads to tension – and ultimately violence – within the Vatican

There is a very big and almost incredible secret at the heart of Maggie Hamand’s Virgin & Child; but I believe it is not one which a reviewer should reveal. It is enough for me to say that the matter is, initially, something that concerns only one person, the book’s central character, Patrick, who is the newly elected Pope (and the first Irishman to occupy that position). But keeping the secret cannot remain simply a personal matter for Patrick because it has profound implications both for his own faith and for the teachings of the Roman Catholic church. Hence the sensitive information has to be shared among a tight inner circle within the Vatican and, unsurprisingly, severe tensions arise over disagreements regarding how best to handle it in order to safeguard the church’s reputation.

The story is set either in an alternative present or in some very near future. In the earlier stages, the conflicts are expressed mostly at the level of verbal exchanges or within the thoughts of individual characters. But in the last hundred pages or so the book does acquire some elements of a thriller when threats, a modest car chase and ultimately some serious violence enter the narrative.

Hamand has to pull off some extremely skilful tricks in order to incorporate strongly religious themes in a popular novel. In the first place she must make convincing the words and thoughts of clergy to whom dogma and liturgy are profoundly important and for whom the presence of God can be something very real. I think she accomplishes this rather well; and  at the same time – in order not to disappoint the prejudices of more secular and sceptical readers – she portrays those who live and work in the Vatican as being liable to the same human failings, factionalism and  deviousness as the rest of us. A second challenge is to make a remote figure like The Pope accessible to an average reader and Hamand manages this by introducing Patrick’s Irish family background in a series of flashbacks. These flashbacks are important not only because they help to build a convincing picture of Patrick’s character but also because they provide plausible reasons for the existence of the awful secret and for the long delay in its discovery. The cumulative effect of the growing-up episodes is to make Patrick a more sympathetic and understandable figure (and also perhaps to confirm certain English prejudices about a lack of sophistication in mid-twentieth century Ireland!)

Besides Pope Patrick, the substantial cast of supporting characters is well-drawn. Furthermore, the dialogue passages involving both clergy and laity achieve what is surely the author’s underlying purpose – namely to interrogate some major elements of Catholic teaching. These theological discussions, some of which become rather heated, do not, I think, expect too much inside knowledge from the reader. Pro- and anti-Catholic sentiments are voiced in straightforward and natural language and both sides of any argument seem to be fairly represented. If ever the narrative does seem to be in danger of becoming bogged down in doctrinal issues then the reader can be reassured that a new revelation or surprise intervention is waiting at the next turn of the page.

As well as the BIG secret, Patrick also has to deal with at least two other significant revelations from his own past. These also play their part in shaping his evolving response to the challenges which face the church and his own Papacy. This is, in fact, a classic story of transformation in which a man’s certainties are profoundly tested so that seemingly implacable attitudes may need to be softened. Transformations in fiction sometimes involve a bit of wishful thinking on the part of writer and/ or audience and each reader of Virgin & Child will have to decide whether Patrick’s changes of mind and heart are convincing. For myself I find that the psychological developments are well done, particularly in regard to how Patrick’s new knowledge about his family also affects the way that he begins to understand his own instincts. A good example of this is when he eventually sees why he has been unaccountably mistrustful of an apparently model Catholic couple to whom he turns for assistance.

Virgin & Child is very readable and I could describe it as a thinking person’s page-turner. I was eager to see what would happen next – especially in the more action-filled final third of the book – but at times I felt that the underlying issues were so serious that I also wanted to stop reading and think about the implications and consequences of the latest plot twist and what they might mean for the sincere and religious-minded characters. And indeed what they might mean for me.

It may also be true that, in the final stages, my slow page-turning reflected an ambivalence about actually reaching a resolution of this complicated situation – because I couldn’t see what sort of conclusion would be satisfactory. In fact Hamand makes a pretty good job of the ending – and leaves us with the possibility that some version of the remarkable events could conceivably have happened already. By this I mean that she arranges for the consequences of the central crisis to be contained within the Catholic hierarchy in a way that could be regarded as damage limitation (but which some might call an impediment to healing). Her final scenes also leave room for readers to interpret the whole episode as some kind of Divine intervention or merely to see it as yet another example of how the religious mind is ill-equipped to deal with science and the modern world.

Hamand does seem to have pulled off the unusual feat of writing a book with authentic spiritual content which is capable of appealing both to those with religious convictions and also to those without.  However, appreciation of certain elements in the story may involve a degree of open-mindedness on the part of both the faithful and the unbeliever; and I suspect it may be the former whose minds experience the greater stretching.