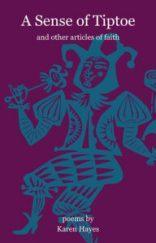 Poetry review – A SENSE OF TIPTOE: A vivid and vigorous collection by Karen Hayes tackles some down to earth issues relating to faith

For this reviewer, Karen Hayes scores some direct hits as early as the second poem of this collection whose declared theme is faith. “The Leper Squint” refers to the small window built into some churches through which lepers were able to observe services without risk of contaminating the healthy folk within. The poem touches painfully on the possible shallowness of our charitable impulses – ‘Leave them stale bread and damaged fruits’ or ‘Give them a begging bowl and offer / Just enough freedom to plead for alms.’ It also threatens to expose the mix of empathy and insecurity that may lie behind our charity

Several recurring features of the collection are on display in this poem. One is the frequent and emphatic use of rhyme. Another is that the theme of faith is rarely presented in a comforting way: questioning and challenge are more common. And thirdly it establishes a connection with Charles Causley, the poet to whose memory the collection is dedicated. The leper window mentioned in this poem is in St Thomas’ church Launceston which was Causley’s own local church. This and several of the other poems in the book were written during a residency in Causley’s house, Cypress Well.

Many of the poems are set in churches and borrow the imagined experiences and thoughts of past or present parishioners. “The Relics” is in the voice of a priest or sacristan at the time of the Reformation who ‘ thinks that this heresy and all its clerics / Will, like contagion, pass within the year’. Hayes uses a striking rhyme between ‘clerics’ and ‘relics’ – the bones of saints which the changing order of worship frowns upon. And as for the loss of the doctrine of Transubstantiation this amounts to

“The Prayer Book Pilgrimage 1549″ is set in the same time of religious upheaval. ‘The flicker of a changing faith, spread thin,/Sealing the loyalties of new men in / And those of the faithful out.”

Not all the characters appearing in the poems have been so deeply engaged in the church’s worship however. “Bells” draws on old records in which a rector hopes

In “The Women who Shaped the Church” Hayes goes back beyond historical members of congregations and recalls the saints for whom churches are named. In particular she reflects on the Cornish saints whose names only appear in that county. She imagines them as ‘young women with wispy hairdos… / traipsing up and down the country lanes.’ After speculating on the difficulties of evangelism so long ago when heaven ‘was only just invented’, the poet chooses to imagine that deep in the south-west

A striking group of ekphrastic poems appears in the middle section of the book. Caravaggio is a strong presence here. Hayes looks at “The Repentant Magdalene” through the artist’s eyes, observing that she is ‘his first woman’ – his first woman subject . Furthermore ‘ he also knows her with his professional eye./ The seeing eye sees all.’ The treatment of “Salome with the Head of John the Baptist” is unusual since at one level it is simply a description of the painting. But the observing eye is that of an omniscient narrator who can discern the thoughts and feelings of the characters and report them with brutal physicality

If we recall that the beheading of John the Baptist was a ‘reward’ for Salome’s King-pleasing striptease act, the last line of the poem has a terrible poignancy as it reminds us that the head on the platter ‘will never turn to watch her dance .’

An especially interesting longer poem is “Room Thirty-one” which is a response to the cumulative effect of a whole group of Caravaggio’s religious paintings in a particular room in the National Gallery. Seeing that ‘the miracles are hung along the wall’, the poet finds

Hayes wonders why so many people come into this gallery and suggests that they get some kind of reassurance from ‘viewing with relief the worn-out stories’ in order to ‘show that you were really here’.

When so many of the poems have a religious theme it is surprising to come across an exception. For instance, I assumed that “The Twelve” would be about Jesus’s disciples; but in fact it is concerned with the deliberations of a jury. “Carvery” is even more down to earth, being a celebration of a restaurant that was a favourite of Charles Causley’s. Superstition rather than faith is on show in “The Hurlers” which is a rather Causley-like story-telling poem about a group of men who were punished for playing games on a Sunday. It begins

This is an engaging and rewarding collection which is enhanced by some useful notes on the places and legends that inspired the poems. These notes are themselves unusual in that they are in the form of a four-page essay rather than a list of brief comments on the poems in the order in which they appear. As has already been noted, many of the poems are rhymed and sometimes the rhyming schemes can give a first impression of simplicity or naivety. This turns out to be a false impression however and the poems seek in a variety of ways to face and grapple honestly with some serious questions about human beliefs regarding relationships with the divine.