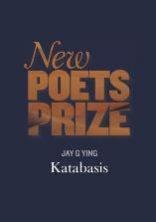 Katabasis was the winner of the 2019 New Poets Prize Competition run by Smith|Doorstop and draws on the myth of the ‘Descent of Inanna’, the Sumerian poem of 1900-1600 BCE. It helps if readers are at least familiar with the story behind the poem because, aside from conventions on translation, there are no notes (not that a poet is obliged to give notes). The opening epigram mentions the 2001 invasion of Afghanistan with a quote from Mathias Énard, “After all a photographer is a kind of spy bought by the highest bidder, a parasite who lives off war without fighting it.” Here, one of Inanna’s roles is that of creating war from which she seeks to profit without fighting it.

Ying’s Katabasis throws readers straight in. The second poem ‘It Was the Earliest Flight’ ends “I felt like a canary assessed as I relearn War’s old death tango”; and the next one, ‘From the great heaven she set her mind on the great below…’, concludes with,

Lapis lazuli is a blue stone and a symbol wisdom, truth and power. It is a recurring motif throughout the sequence.

In the Sumerian epic, Inanna, the Queen of Heaven, visits her widowed sister Ereshkigal, Queen of the Dead who lives in the underworld. Their father has the power to revive the dead. At face value, this seems a reasonable action from Inanna. However, what is not explored in Katabasis but is useful for readers to know is that in the ‘Epic of Gilgamesh’, Inanna (also Ishtar) is rejected and, in her rage, uses the bull of heaven (her brother-in-law) to break the doors to the underworld leading to his death and many civilian casualties. It should not come as a surprise that Ereshkigal does not welcome Inanna. When Inanna arrives, she is ordered to remove the symbols of her royalty and her clothing, so she arrives naked before her sister. A judgement is then passed against Inanna, who protests, but is killed, hung from a hook on the wall and left to rot. This part of the epic is picked up in Ying’s ‘Animal Vegetable Mineral’,

The last reference shows Ying’s willingness to play with time and merge myths. It also shows Inanna as an unreliable narrator. She caused her brother-in-law’s death yet shows no shame or remorse. She has not expressed any condolences towards Ereshkigal. Inanna seeks to put herself centre stage and appears to be unable to accept the reactions of others, particularly when she doesn’t get her own way. Her behaviour is that of a narcissist. An image picked up in ‘Visible Waves’ suggests Inanna “is obsessed with the only photograph she smuggled out of her time in War” that shows her hanging from that hook and

That use of “gravid” suggests pregnancy, albeit a malnourished one. A landmine is generally buried and disguised and doesn’t reveal its true nature until someone steps on it. Ereshkigal’s behaviour is that of a provoked, bereaved woman dealing with someone who will not accept responsibility for her actions or show remorse. In ‘Cursed Resources’ Inanna questions, “So, War, what did you do to my sister?” and the ‘she’ in the penultimate line of the quote is Ereshkigal,

In the original epic, Inanna appeals to her father who arranges for her rescue. However, someone has to be found to replace her. Inanna finds her servants in mourning but her lover, Dumuzi is not and so he is named as her replacement. He appeals to the sun god for help and is transformed into a snake which buys him time but not escape. His sister volunteers to go in his place and it is decreed that brother and sister will share half a year each in the underworld. Inanna, it seems, gets away with murder and cheats death. Ereshkigal is left to mourn her husband.

In Katabasis, Jay G Ying revisits ‘The Descent of Inanna’, and recasts it against the backdrop of the war in Afghanistan where foreign powers arbitrarily invaded without invitation. They had the intention of imposing peace, but were ill-prepared for what they found. Readers do need some familiarity with the original epic to understand Katabasis. The use of long lines, mixing poetry and prose-like structures, gives Ying chance to build a sense of fracture, using images to create dream-like visions and question the aftermath of war and devastation. Readers are taken on a journey, following Inanna, but the focus is on the destruction that follows in her wake and how her apparently good intention of visiting a grieving sister, actually has a darker purpose. Her failure to acknowledge her part in causing her sister’s grief, creates a greater fracture.