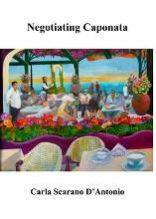 Negotiating Caponata is an enjoyable collection from Carla Scarano D’Antonio. The back cover text discusses the role of food in the book, and D’Antonio certainly weaves the opening of the collection round themes of food preparation, and the meanings and symbolism that food has in families. But don’t be drawn into too relaxed a view. The trials and tribulations of mastering Italian cuisine are nothing compared to the intricate – and sometimes painful – family relationships. These dominate the later part of the collection which is filled with an accompanying sense of loss.

In “Pajarita” D’Antonio muses on the ability of origami birds to carry her thoughts and feelings across oceans:

She envisages the paper bird:

But she also wants a response. She waits ‘… for you to reshape the bird,/ send it back to me.’

“What I was leaving” introduces us to the idea of distance and departure that characterises parts of the book. Here D’Antonio remembers autumns from different years with great nostalgia. In 2014:

But in 2018 the fading of the landscape in autumn brings memories of other times and places:

The next section of the collection, ‘My Father’s Death’, has a very different and darker tone. In “Your illness” D’Antonio takes us through the pain and suffering of the dying:’ your body kept retching / bucketfuls of brown liquid / day and night.’ But the sadness for the dying is coloured by memory. The family history cannot be ignored, even at this point:

Similarly, in “Your last words” the past is not far away:

but despite the mixture of pain and love in the memory, the poet-narrator

Following the father’s death, the poet is elected to conduct the final act. In “Dispersing your ashes” the poet asks: ‘Who else can do it?’ The final dispersion has great sadness and a touch of humour:

But the poem expresses a desire for the final act to have a greater sense of occasion:

The final section, ‘In Touch’ draws family memories together. First we meet “Grandad Ciccio and Grandma Orsola” in a skilfully written specular. D’Antonio creates a word picture so well that you can see the couple in your mind’s eye, as if in a sepia photograph. The couple sit ‘serene like ancient Roman statues’

Grandad Ciccio’s ‘arm touches lightly her shoulders, / a bag made of silver-net hangs from her gloved hand.’

By the end of the collection we have a strong sense of the family, and it is fitting that “Volcano” explores the world of the mother. The poem starts quietly enough: ‘Crickets fill the lap of night,/ walls sweat the heat of the day.’ But the peace is a precursor to internal drama:

She calls him ‘the bastard who squandered on his tart’ and complains about the daughter, ‘the bitch who calls me a crazy hag.’ But the anger and resentment is sharpened by the awareness of what she has lost. Beside the family grief, there is:

And with no solution, no prospect of improving her situation, she watches as:

I really enjoyed this collection. I confess to being a little unsure at first, when I ran into a group of recipe poems, but as soon as we started to meet the family behind the food and saw how important food was in their lives, the book came to life for me. The intensity of the family relationships is graphically captured with great sensitivity, and the sense of pain and regret that runs through the book like a watermark grounds the poems. The final poems look at the beginning of a new life, so the collection finally moves away from the trials of family life and the collection ends on a positive and upbeat note.