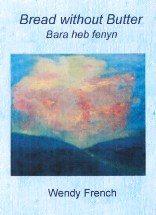 Grief comes with many feelings of loss, especially when you lose a parent. In this beautifully judged collection, Wendy French explores how the death of her mother evokes other losses and also brings a deep connection to past generations and place. The poems are set mainly within the Welsh farmhouse where she grew up, and the community around it.

Unsentimental, pared back, emotionally raw at times, yet tender and loving in their detail, these are poems that explore a family history where past and present overlap. Sentences flow into each other, or snap off in the middle like a thought hanging in mid-air: “a kitchen like no other. The hum and hisstle/yes that word will do of a range that lives on/ like the oldest of apple trees/in the orchard.”

French likes mixing up language, so we suddenly get her mother speaking in Welsh, something that was never permitted in her childhood:

If you don’t speak Welsh, helpful glossaries are at the bottom of each page to make things easy for the reader. But I didn’t need the occasional quotes from R.S. Thomas; there was enough significance in the poems, which celebrated the language, people and landscape of Wales.

There are also visits to Moscow, to Warsaw and Japan; but again, I preferred the poems that stay close to the tight knit community in which French family grew up. They conjure up rain, the sea, fields, the milking of cows and the pouring of tea, life and death in the small farmhouse and outside in the barns as here:

Who is lying on the table? Is that the poet?  Sometimes she inhabits the poems, sometimes she is only vaguely there, like a ghost herself. Perhaps she is one woman in a long line of women who, in the poem ‘Welsh woman’, transmute into birds: “These old women have taken to roost in the treetops/caw to one another as dawn awakens the skies/they praise the changing/seasons and delight in the rustle of feathers and leaves.” Here, as in many of her poems, French effortlessly moves from human to animal, bird and plant life, and from memory to story and all the strangeness in between.

In ‘Grey’ she imagines herself transformed into the Mamgu (the grandmother). “I am the Mamgu now/I love boys with wrinkled socks/that barely cover their ankles/I eat the smoky-grey jellies first/I look for grey shapes in the night.” But what are the smoky-grey jellies she talks of? There are things that only she knows. And she presents us with strange, almost dream-like, moments as in ‘Minnows’ where something particular and uncanny hovers above her: “Once I thought I knew what it was/this thing flying through the air/or moving like a minnow through water/delicate and hard to fathom but there/definitely there.” We long to know, but the mystery stays just out of reach, like a memory that is hard to catch:

The books ends in the present when the spectre of Covid 19 and the geographical distances between us challenge the ties that bind us together between birth and death. Bara heb fenyn – bread without butter. The very basics of life are the things that matter in the end.