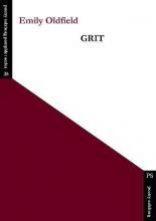 Poetry review – GRIT: Pat Edwards is impressed by Emily Oldfield’s ability to take her readers with her into a rugged landscape

As the title implies, the reader will need to prepare to get dirty in this encounter with the stones, mud and earth beneath their feet; will have to steel themselves for anything but an easy road. Oldfield unflinchingly describes her experiences of growing up in a landscape shaped by weather and industrial heritage, full of places she knows intimately from lonely runs and childhood memories. Threaded through every poem are reminders that all this was here long before any of us and that the rocks and mountains, like people, bear the scars of what is done to them.

The opening poem ‘Bacup’ is a sensuous attempt to answer the question “What makes mud?” In it the poet considers geology and social history and paints tactile references that burn like wounds:

Always there is a feeling of something lost, as in ‘Britannia’ where the poet imagines how “the old railway line ached in its phantom limb/more than forty years gone.” There is so much more going on in this poem and we feel the writer, or folk she knows, yearning for escape.

Oldfield is playful in her use of place names and of expressions such as “breath taking” or “the lie of the land”. In ‘Brown Wardle’ she calls the latter expression “The great fib, the dishonesty, the unmentioned” as she reflects on generations of folk who have scraped a living from the hills and moorland. In ‘Stacksteads’ Oldfield reminds us of the dangers of wild country and disused industrial sites with their barbed wire, slippery rock faces and steep climbs. The act of daring to tackle these places seems to stand as metaphor for the challenges and pitfalls of our lives. This is striking in ‘Waterfoot’ where “grown men are haunted/by happy childhoods,/now facing parents in hospitals.” There are moments of magic where Oldfield shares fantastic encounters with nature, such as in ‘Brock’ where she sees a badger in daylight, “a stillness shared/like a seat at a bedside. The mutual stare.”

The poems take many forms on the page, including neat stanzas of four or five lines and, in contrast, a series of much longer poems towards the end of the book. ‘Bury Road’ is one such, which charts the runner’s relationship with their trainers. The rhythm and rhyme evoke the pulse of a run:

In ‘Crawshawbooth’ there are nasty accidents with railings and in the factory. Here Oldfield conjures up the taste of blood and blames the devil for illness “as you melt into morphine.” ‘It’s coming home’ borrows its title from the famous football anthem and follows a narrative remembering the “ritual humiliation” of PE lessons, bullying, drugs and maybe something much worse. The poet uses the repetitive refrain of the title to good effect and builds a relentless momentum. She does this again in ‘Mile Stones’, another running poem, this time with very little punctuation, a trick which helps the poem gather pace until you feel you are running too. Apt then that the next poem focuses on the heart as both emblem of love and engine driving the blood. The telling line in this, “we crave to feel others, to give up ours” suggests a longing to be loved and to love in return.

The final poem in the pamphlet is one of my favourites among so many powerful and tender pieces. ‘Rawtenstall’ is a kind of eulogy to the force of water and its ability to shape the land, feed industry and give us pleasure.

When I started to read Grit I feared I might be getting into a cycle of worthy and interesting poems about a rugged landscape. It quickly became apparent these were poems about a raw communion with the elements and with the past. I was exposed to the cold and to the ever-changing Pennines, the throb of Lancashire, the impact of weather and generations of folk. Oldfield has a canny knack of taking you with her on her gutsy runs up and down the contours of her memories and troubles, until you are bent over double and out of breath.