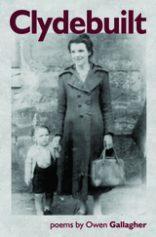 Anuther Glesca: a poetry review by Brian Docherty who takes a thorough look at the twists and turns of Owen Gallagher’s idiosyncratic collection Clydebuilt.

Clydebuilt is Owen Gallagher’s fourth book, as the acknowledgements suggest, representing several years work, and described on the Scottish Poetry Library website as ‘a memoir in verse’, presumably something the poet agreed to. He was born in Glasgow as part of the Irish Diaspora, but has lived in London for some time; the back cover informs us that he was a primary-school teacher in Southall, West London. Only one poem here, ‘The National Literacy Thief’, refers to his professional life; but as a teacher, and like all the poets your reviewer knows, he is sensitive to the range of languages, dialect, and idiolects encountered personally and professionally. As you might expect from Smokestack Books, Clydebuilt is political in several senses.

The book’s cover features a photograph of the infant Gallagher and his mother, possibly taken with a Box Brownie camera. Neither subject is looking at the camera, and our author’s expression is questioning, as if to say “What’s going on, how do I make sense of the world?” – always a good start for a writer. His parents are a significant presence in the book. We start with a retrospective poem, ‘Soot’ which opens

In this scenario, the narrator’s mother has been subjected to the barbarity of ECT, presumably as a consequence of suffering from depression or other mental health issues. A powerful and arresting image to start this ‘memoir’. This is followed by ‘Fathering Mother’ where the infant, pre-school Gallagher accompanies his mother to work

‘Newspapir Boy Meets Goliath’ is the book’s first poem in Glasgow vernacular, a tale of bullying, theft and revenge, that draws on the Biblical story of David and Goliath. There is quite a bit of revenge and anger in these poems. We switch back to standard English for ‘Cut!’ which details a childhood experience in a cinema toilet,

The poem finishes here. The memory has been faced up to, but the reader has to guess if anyone was ever told about this event at the time. The next poem, ‘A Very Private Crucifixion’ might be related to ‘Cut!’ or it might refer to methods of classroom discipline that would be seen as unacceptable by most people today. ‘Crawlin’ ’n’ Trawlin’ deals with the subject of head lice in (or on) children, while ‘Carbolic’ is set in the present, where a bar of carbolic soap is ordered online as an exercise in nostalgia. We meet the poet’s father in ‘Lavender’ where

while ‘Plectrum’ introduces us to the realities of life without debit or credit cards, when sometimes two wages coming into the house were not enough,

On the occasion recalled, a guitar is pawned, but our young musician wants it back:

We have to assume that the guitar was not retrieved, or there would have been consequences. In ‘For Your Penance Say Ten Decades of the Rosary’ we find a similar scenario to that in Paul Muldoon’s poem ‘Cuba’ where the priest hearing his eldest sister’s confession is asked a very personal question. Here, stanza two reads

‘The Clyde Runs Thru Mi’ is one of several poems in the local vernacular dealing with the more colourful aspects of life in some parts of Glasgow in the 1960s and 70s. In this poem, the narrator is asked a question your reviewer heard all too often back then

Given that Glasgow had six football teams until 1968, this shows the negative aspects of the local obsession with football. Here, the response is to make a speedy getaway, others might try to pass themselves off as Partick Thistle or Clyde FC supporters and therefore ‘neutral’. “Ir Yoo Lookin’ it me Jimmy’ also deals with violence, while ‘Claiths-horses’, ‘Guinness Black’, ‘Thi Gorbals Knot’ and ‘Thi Unoffishal Toorist Guide Ootside Glesca Central’ show Glaswegians’ obsession with style and being well dressed in the latest fashion. If a young man wasn’t earning enough to buy clothes and shoes, some redistribution of resources by shoplifting was resorted to. Some readers might feel that there is some stereotyping going on here, and might point to Eddie S. Linden’s poem, ‘City of Razors’ as doing something similar; others might ask whether parts of Glasgow were any more violent than say, parts of London, Liverpool or Manchester?

We seem to have skipped over poems addressing the deaths of the narrators parents, as in ‘Sad’ ,

(For younger readers, ‘the Spike’ was or were the ‘model lodging houses’ where unmarried Irish working men lived.)

‘Damned That He Was Irish’ starts every couplet except the last with the word ‘Damned’ and is an indictment of the prejudice experienced by Irish people in the UK, since 1845 especially; while ‘Tea’ recalls a son and mother taking time to share a couple of tea together, and informs us of

We then fast-forward to contemporary in London, in ‘Counter-surveillance’ where a plain clothes police woman is monitoring a political activist, who is using his laptop to direct protesters away from police waiting to ‘kettle’ them. But she herself is under surveillance, and

‘The Accumulation of Capital’ is set in the Red Lion pub, where Marx and Engels drank and composed The Manifesto of the Communist Party and deals out some Soho justice to a pickpocket, while ‘The Karl Marx Appreciation Society’ is written in the persona of ‘Comrade Einstein’.

‘The Blacklist’ is another revenge poem, featuring a man who commits suicide after being sacked without pay, then blacklisted; the last stanza reads

The book then presents us with a sequence of fifteen poems set in Ireland, mainly in County Leitrim and Donegal. The poems for the writer’s maternal grandparents are particularly successful, ‘The Saddest Passing’ starts

while ‘If He Was to Pass, Then So Would I’ finishes

‘Christmas in Belfast’, dated 1991, takes us back to what some people call ‘The Troubles’ and ,once again, a woman seeking revenge features, this time for the killing of her son by British soldiers, finishing

‘Donegal’ shows County Donegal as something like a pastoral idyll, a world away from Belfast, ‘The Road to Ireland’ is more pastoral, although the last line reads ‘and who sprayed ‘Ireland is out of order!’ Different aspects of life in rural Ireland are addressed, such as older men who remain bachelors, provoking the scorn of the formidable Kit Ferry in ‘Away and Find a Bride’ who wants to see her three unmarried adult sons married, demanding

Those bachelors, we are told, are all dead now, so unable to speak for themselves; but perhaps the local women emigrated to London or Boston in search of a better life. (Other readers may have insights that have escaped your reviewer.) We leave Ireland in the company of our narrator and his companion, who ‘stuff the car’s boot with peat / for the sniff, the gift of it, at home.’ Hardly surprisingly, we then encounter our narrator finding a couch in a skip near his home, and of course

He plays both parts in this adventure, showing that there is nothing wrong with talking to yourself, at least in private, and it is certainly cheaper than therapy, and less destructive than self-medication.

The books final two poems, ‘Before I Make My Ascension to Heaven and ‘Dear NHS’ are versions of last instructions about what is to be done with the poet’s mortal remains. The first expresses a confidence that he will ‘snuggle up to Marilyn Monroe’ in Heaven; how President Kennedy, or any of Monroe’s other lovers might react is not discussed. In ‘Dear NHS’, the second stanza orders whoever reads this missive

We have certainly come a long way in this substantial and varied book, and it is to be hoped that this is not Gallagher’s valedictory collection, that maybe there is more to come, and that he will explore a new path. After all, for someone with Owen Gallagher’s political instincts, current developments, as of September 2019, including Brexit, Covid-19, global warming, and the follies of President Trump, should prove a rich source of material.

As Steve Jobs used to say, ‘One last thing’; there is no excuse for badly produced or poorly edited books, and Smokestack do not disappoint in this respect. Clear, readable type, no obvious typos (I accept potteen as one spelling of poitín) and anyone struggling with the Glasgow vernacular should go and read James Kelman’s How Late it Was, How Late, or just listen to Billy Connolly or Frankie Boyle on TV. It’s really not that hard.