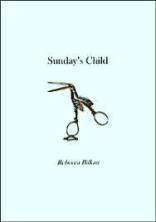 Rebecca Bilkau’s pamphlet contains a remarkable sequence of poems that cry out about the injustice of someone being considered an outcast because they are ‘un-fathered’. The poems have no titles, except for the last one (‘XXIII: The Truth’) and are marked by Roman numbers to signify a progression that not only occurs on the page but significantly unfolds in the narrative revealed in the verses. The word ‘bastard’ resonates and ripples in the lines; it is an ‘open wound’, a stigma that wears the protagonist down but also triggers defiance:

The story begins with a single mum who was sent to a mother and baby home hosted by nuns when she became pregnant. The atmosphere in the home is almost threatening: the pregnant girls are diminished and controlled by the nuns and constantly reminded of their ‘shameful’ condition:

The memories of the place come back in the mother’s and the child’s lives like a recurring and persistent nightmare, an outrage that cannot be cancelled but only acknowledged as an ‘open wound’ they wish to forget. Possible financial profits are hinted at in an exchange in which the girls and their babies are the victims of a transaction that takes advantage of the weak and vulnerable instead of helping and supporting them.

The mother keeps and brings up her child  despite all the difficulties that a single mum encounters in such a society. The child faces bullying from her peers; but nevertheless, she reaffirms her sense of self each time in an excruciating effort not to be erased by their judgmental attitude that does not allow for ‘imperfections’ and severely punishes transgressions. It is an unforgiving viewpoint whose effects are enduring and devastating:

This poem skilfully depicts the child’s suffering and the search for an identity for her uncertain self who is like a ghost expanding and shrinking and still unformed, expressing her malaise in eating disorders. Her difficulties are reflected in the use of the gerund (starving, binging, swimming), which reveals a personality in flux. The word ‘transparency’ highlights a state that may seem inconsistent but is actually open and porous to different possibilities. The consequences of the pressures of society are therefore decisive in the mother’s and child’s lives; they trigger anger but also survival and renewal. Surviving despite the hostility of society is the energy that eventually shapes the child’s personality and defines her uniqueness. She cuts out her identity relentlessly in a world that rejects her: ‘who do you think you are?’ (‘XIV’) is the silent implicit question that is whispered behind her back. Thanks to her resilience and her imagination, she can regain her essence and be rescued:

It is through the poetical utterance that voices her past memories that the child is eventually reconciled with her traumatic past. It is a process where ‘[b]alance is paramount’ in the unsettling position of ‘wanted unwanted child’ (‘XXII’) where uncertainty defines her uniqueness.

The final poem is moving and revealing at the same time. The ‘truth’ her mother speaks on her deathbed is disconcerting and yet reassuring: ‘I can’t remember’, she says. After all, it is not necessary to know who her father was or what kind of relationship her mother had with him. She brought her up with love and they survived together, tightly knit in a powerful bond that shaped their lives:

The mother is still present and caring for her when the child grows up and her own baby dies. This confirms their bond of sisterhood and their strength as women and as humans which has allowed them to face adversities and hardships together.

Bilkau’s accomplished lines reveal a profound sense of humanity. The consequences of societal stereotyping and prejudice can mark one’s personality deeply and have enduring consequences. Such emotions are expressed in these poems in a masterly way and suggest a renewal which – while it cannot erase the past – can contribute to the continuing formation of a strong individual.