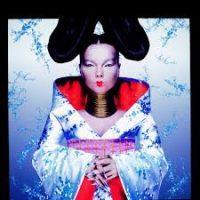 Victoria and Albert Museum
Until 25 October 2020

The complex evolution and rich cultural significance of the kimono are thoroughly explored in the exhibition at the V&A.  The exhaustive display of elegant clothing from the 18th century to the present day not only highlights its iconic and symbolic importance but also traces its evolution throughout the centuries.  Although the shape of the traditional kimono has not changed significantly, it has been influenced by modern fashion, transforming and renewing its silhouette and form, which shows its versatility and adaptability.

The word kimono literally means ‘a thing’ (mono) ‘to wear’ (kiru).  Its simple shape is composed of lengths of fabric sewn together, and wide sleeves at the sides emphasise the flatness of the style.  The patterns, colours and weaving, as well as the dyeing techniques, are paramount, and their variety reveals the preciousness of the garment and the social status of the wearer.  The dressing process is also important; it is a ritual of sorts in which the left side is wrapped over the right and then tied up at the waist with a sash, the obi.  The straight lines emphasise the overall beauty and the knots function like amulets.  The kimono becomes alive only when it is worn, that is, when it expresses the personality of the wearer, which harmonises with the garment.  It became fashionable in Japan in the Edo period (1615–1868), especially among ruling classes such as the samurai.  Merchants controlled the production of kimonos and the latest trends, which were also influenced by courtesans and kabuki actors.  The exhibition displays interesting pictures – ukiyo-e, the pictures of the floating world – depicting fashionable women and men wearing kimonos in shops, at home and on stage, testifying to and advertising the last trends.  The garments float around the body, with the movement being highlighted in the hems, and the beauty and elegance of the wearer are emphasised through the harmonious matching of colours, patterns and shapes.

Though Japan was mostly secluded during the Edo period, trading with the Dutch East India Company allowed Japanese products to be exported to Europe, and the kimono was one of them.  It was adapted to western tastes, becoming a ‘nightgown’ with long narrow sleeves and padded fabric.  It became so popular that Japanese firms couldn’t keep up with the demand, so it was produced in India too, where new patterns were created, such as bold black and white chequered patterns.  The designs that appear on kimonos are often connected to nature, as according to Japanese culture, ‘things become’ (naru bunka) in a relationship with nature.  Thus, the harmony of the seasons in particular is reflected in designs.  The colours match with the seasons, referring to the slightest change in the climate.  In the past, several layers of silky kimonos were worn during ceremonies to keep the person warm.  Light cotton or silk crêpe kimonos, the yukata and the katabira respectively, were worn in the summer; they were loose and let air flow through them.

In the old days, people would pass down kimonos from generation to generation, reusing or remaking them and eventually using the material for rags, patches or bags in an eco-friendly perspective.  Originally, the kimono was called kosode, meaning ‘small sleeves’, and the distinction between men’s and women’s kimonos was not so relevant.  Later on, women’s kimonos became more sophisticated, with an emphasis on colour and embroidery techniques turning them into real works of art with subtle meanings.  The patterns were connected to literature and religion, to poetical references and links to nature or even to patriotic patterns.  For example, cherry blossoms in spring and chrysanthemums and maple leaves in autumn, or pine and plum in wintertime.  Cranes, butterflies and dragonflies were considered auspicious because they symbolise longevity and renewal.  Calligraphy was also depicted as well as artistic paintings of clouds, water, snow and landscapes.

Today, kimonos are worn for special occasions, for weddings or when people visit temples or attend ceremonies.  They survive as luxury items too, as symbols of national and cultural identity.  The last section of the exhibition displays how, since the Second World War, past and present fashions of the kimono have merged and continue to do so today.  There has therefore been a transformation of the garment that emphasises its versatility but also its ambiguity and multiple meanings.  It is a dynamic item that maintains its links with tradition and, at the same time, regularly renews its shape.  For example, John Galliano for Christian Dior (1960) created a jacket with a tiny waist and wide sleeves and the Chee-Shie-San ensemble, which includes an outer kimono that is lavishly embellished.  Other designers have used traditional shapes combined with abstract patterns or the obi featured like a skirt.  In the 1950s, kimono-style coats were popular, and more altered examples are featured in the ensembles of the 1980s and 1990s, such as belted wrap coats and camouflage designs.  Some of the costumes for Star Wars were inspired by kimonos, as were outfits worn on stage by Freddie Mercury and Madonna (a scarlet dress by Jean Paul Gaultier) and the picture on Björk’s 1997 album, Homogenic, which features a kimono-style dress by Alexander McQueen and Masai neck rings by Shaun Lean.  The garments highlight the beauty of non-western fashion and reveal a multicultural view.  At the end of the exhibition, unusual and original items are presented, such as the ‘Wa-Lolita’ ensemble (retailed at Topshop in 2012) and the hand-painted T-shaped outer kimono named ‘Fuji Heartbreak Kimono’ (Milligan Beaumont, 2019), which was made especially for the exhibition.

Interesting accessories are also on display, such as combs, hairpins and mirrors in lacquer and tortoiseshell that were used to keep the hair up in the courtesan fashion.  Inr?, tobacco pouches, were popular and useful too as kimonos have no pockets.  Pictures and prints of kimonos are particularly interesting because they show how kimonos were worn in everyday life and on stage and how they inspired European painters.  A picture of the stations on Tokyo’s Yamamote railway line is based on kimono patterns; ‘Tokyo Hinagata’ (2019), by Nagatomo Yuki, is particularly interesting, with its modern version of traditional figures.  Precious Cartier jewels in the shape of wisteria and plum blossom sparkle in their diamond sets, testifying to the appreciation of eastern culture.  The richness of items and the engrossing explanations provided throughout the exhibition give a complete and fulfilling view of the evolution of the kimono in Japan and in Europe, highlighting both its traditional values and its capacity for transformation.  Its iconic importance in Japanese and international culture reveals an enduring interest in this apparently simple and yet fascinating piece of clothing. 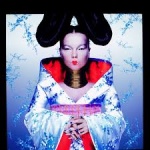