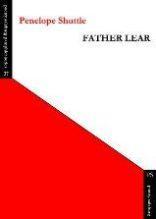 Poetry Review – FATHER LEAR: Peter Ualrig Kennedy is transfixed by Penelope Shuttle’s mastery of her art in her most recent collection

Penelope Shuttle is a poet’s poet and, my goodness, this collection is a veritable treasure house of amazing poetry. From line to line there is constant surprise, while her words run smoothly through, making perfect sense of the unexpected. In ‘Big Ships”:

These lines have such heft, for we know that the poet has experienced the deep pain of loss “making me think / how sadness can bed down in a heart…” In the next poem, ‘Hearts by Night’, there is a sequence of metaphors to astonish the reader:

‘Kew Gardens, 1913’ employs some neat metonymy: “Green-painted tables are run off their feet / in the prideful park with its fake Pagoda” and later continues fancifully with “The shalloon apron struts along the borders.” ‘Hallam Street’ suggests London as a Faeryland:

I love “rattle-tattle round” but it’s that final line which makes one sit up straight. This poem is also unusual (or unique) in that it casually tosses “sturdy omophores” into the mix. I am not often wrong-footed by coming across an unfamiliar word; and am I to be fazed by a term for a coarse fabric? I shall squirrel “shalloon”, as well as “omophores”, away into my lexicon cupboard. As well as the appearance of some esoteric words, there is opportunity in each page for a new form: sometimes a poem of couplets, sometimes of tercets, often a thoughtful free verse poem – possibly one strewn with caesuras and white space.

‘Self-Portrait as Katharine of Aragon’ is a poem which seems particularly personal. It is notable for the shock of its single final line “They say the axe has been ordered from France” – but this is not a metaphor. The poet, in the guise of the cast-aside Katharine, suddenly confronts us with the fate of her usurper Anne Boleyn. A grim realisation – but is Katharine saying to herself “She had it coming”? Intriguing. And intriguing again is ‘The Lucidity (or Otherwise) of a Swan’. We are now deep into a dreamscape, but one with some deft imagery:

‘Uncommon Prayer’ is an incipit: “all about lying your way / to the truth” and leading us to “as step by step / the wren / runs up the tiny air” – what a masterly image! This is immediately followed by a departure from earlier form with a partly-found poem, in non-rhyming couplets, inspired by a visit to the Ashmolean Museum; it culminates, after many unthreatening museum observations, with this unsettling ending:

In the next poem, Shuttle comments “I’m past thinking / but I think about colours all the time” which must be the description of a mind folding in upon itself. And so we move to ‘Verbs’, a poem with such a deft touch that the simple words pull at the heartstrings:

A page or two on, and, after the simplicity of ‘Verbs’, the poet states that “my heart once again behaves like a peat bog, / overflowing, undergoing paludification by absorbing sixteen times its own weight” – a simile strong enough to overcome all adversaries. But if that has left you wondering in admiration, ‘the opposite of night’ may surprise you with an animal fact:

Well, there’s no arguing with that. And days “are never sorry about breaking up with you / was never meant to be they shrug / leaving no forwarding address” – a clever notion.

In this review I have touched on only a selection of Penelope Shuttle’s poems. All of them, from ‘Father Lear’ to the concluding ‘1976’, make us care, make us want to care. The collection finishes with ‘language as a gleaming shield’ which is not a poem but a “behind the poem” article, also a threnody for her late husband Peter Redgrove. She ponders “Perhaps a poem is a spell spelt out to test how much reality we can bear. Not much, as we know.”

Finally, from ‘it came as if called’:

At the end I have read and understood and revelled in the poet’s use of language, and I only want to say to her: Penelope – we care.