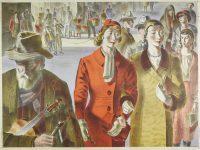 Painter and teacher Paul Nash referred to the group of artists he taught in the early 1920s as “an outbreak of talent”.  They included Eric Ravilious, Edward Bawden, Edward Burra, Enid Marx and Barnett Freedman, whose work is the subject of the first major retrospective in 60 years, showing at Chichester’s Pallant House Gallery and accompanied by a smaller exhibition of the work of his talented peers.

Like Freedman’s career, the exhibition struggled to get off the ground.  It had been open for three days when lockdown closed the gallery’s doors, forcing the Pallant into a period of radical reassessment.  It reopened in August and has extended its current exhibitions until November.  After that, plans for future exhibitions are uncertain.

It’s a worrying backdrop that heightens our appreciation of Freedman’s achievement and of the Pallant House Gallery’s efforts in bringing it to us.  We can no longer take for granted its reliable stream of meticulously curated, satisfying exhibitions.

Less privileged than some of his artistic contemporaries, Freedman was born in east London to Jewish immigrants from Russia.  Throughout his life, he was debilitated by asthma and spent several years of his childhood in hospital, where it was with the help of nurses and doctors that he learnt to read, write, play music and draw.  His initial applications to the Royal College of Art were rejected until he directly approached the principal William Rothenstein who recognised his talents.

Freedman’s subsequent fame is as a commercial artist, working for Lyons and its famous corner houses, oil giant Shell, publisher Faber & Faber and the Post Office, which gave him his largest audience of all when he designed the commemorative stamps for the 1935 silver jubilee of George V.

Freedman made no distinction between commercial art and any other kind.  For him, there was only good art and bad art and he gave his all to whichever task was in hand, imbuing the ladies heading to Lyons for afternoon tea with as much personality as Natasha in his illustrations for War and Peace.

His concern for character was linked to a fascination with theatre and the drama inherent in supposedly ordinary lives.

For his diploma piece for the Royal Academy of Arts, he painted a May Day celebration that conveys the impression he had imagined the stories of every character he portrays.

His wife Claudia’s Sicilian family gave the couple the perfect wedding present: Sicilian puppets, which Freedman kept in his studio and repeatedly painted.  We meet the richly costumed Angelica and the portrait that brings her to life.

During his years as a war artist, Freedman’s focus was again on the individuals caught in the struggle.  One of the most compelling of his works during World War Two is the interior of the submarine HMS Tribune.  Freedman, we’re told, was fascinated by the human characters and their close interaction with the machines.  His fascination is infectious.

Another stand-out from the war artist period is his depiction of D-Day Preparations taking place in the high-ceilinged War Room of Portsmouth Army Base.  It’s unfinished for reasons not disclosed, but still is characterised by Freedman’s painstaking attention to detail, atmosphere and every individual’s response to an extraordinary day.  He cares and in turn we care as much about the commander as the junior officer at the back of the class.

The small accompanying exhibition “An Outbreak of Talent”, drawn from The Pallant’s rich collection, sets Freedman in context.  He shares with his peers his flair for design and stylisation and stands apart in his deeply felt connection with everyman – or as John Rothenstein, the art historian and son of William Rothenstein, put it: Freedman was one of the people. 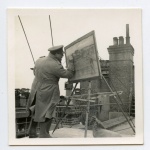