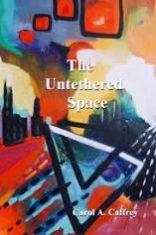 Poetry review – The Untethered Space: Pat Edwards finds that Carol A Caffrey’s very personal poems are able to speak to the general reader

This much-awaited debut chapbook does not disappoint, and offers poetry that draws deeply on the author’s Irish roots. The title is taken from her poem ‘The Moorings’ in which Caffrey describes a time and place that

Caffrey is in the unenviable and unusual position of having lost four siblings. Naturally, this experience colours so much of the writing which becomes an exploration of mourning, remembrance and tribute. The poems are grouped under headings borrowed from Italianate terms for how to play music: Cantabile; Furiosa; Con brio; Espressivo; Misterioso; Semplicemente. The reader feels an invitation to engage with the work in a similar fashion, so that the opening poems form a gentle introduction into the deeply moving subject matter, such as in ‘Allihies Flowers’, which acknowledges “a certain peace among the stones/that stand above you now.” Similarly, ‘Nocturne’ quietly questions if “all this mess/of love and sweat is just a faded stain.” The writer establishes her deep and engaging connection with Ireland, its landscape, legends, language and history. In Wales, we might refer to this as Hiraeth, a longing or desire, particularly for home. The Celtic tradition honours the past and its role in shaping the future. In ‘Children of Lir, Landing Site, Allihies’, Caffrey recalls an Irish legend and conjures up “the pitch and roll/of unforgiving seas.” The sea features in many of the poems – maybe as metaphor for the geographical, political and social gap between Ireland and the United Kingdom.

The Furiosa section has a change of mood. Here the poet shares stronger emotions of frustration and anger, even evoking the post-partum blues that can follow a birth, to describe how different sides might feel after a vote. Is this the European referendum, the abortion debate, or even the vote to legalise gay marriage? Any of these could prove contentious subjects for an Irish woman living in England. In ‘Buzz Cut’, Caffrey refers to the sad and wry Hoagy Carmichael lyrics, I get along without you very well, and here the metaphor is the felling of trees, “it’s only deadwood, it doesn’t matter.” Of course, we know it matters very much. Unflinchingly, Caffrey goes on to tackle the raw topic of unbaptised children in ‘Cillini’, urging “let the wind blow softly through their names” as if to shame the authorities.

However, it is not long before sadness returns. In the next group of poems the poet listens “for the ghosts who walk beside me.” Then we are privileged to encounter maybe the most moving poem in the chapbook, ‘The Waiting Room’. The bad news that a patient receives prompts the understated response that “his words were very hard to hear.” Anyone who has ever been there will understand that moment. Equally affecting is the prose poem ‘Prayer’ in which Caffrey pleads with God, begging Him to “only make it okay” and “give them something for the pain.”

The Misterioso section is well described, a series of stranger poems conflating all sorts of abused and maligned people, from confused and sedated patients to Native Americans and the Syrian victims of war. These are well-crafted poems reminding the reader that there are troubles beyond the personal. Caffrey identifies with the victims and helps the reader feel her unease and the world’s collective neglect.

Finally, Caffrey allows herself the indulgence of four very particular poems, each an individual tribute to her four dead siblings, and the closing poem ‘Sandhya kal’ in which there is transition, maybe some closure, as she hears “all the words we’d longed to say resounding in the silence.”

Caffrey’s handling of universal and personal themes is never sentimental, though sometimes nostalgic, and connects with the reader in a profound way. There is musicality, acceptance and a strong, clear voice. Caffrey uses the sonnet, free verse and the prose poem, and shows an impressive range of style and pace. These poems are surely catharsis for a woman dealing with grief, but they also speak to anyone who has known loss. They are poems of displacement and injustice, of endurance and perseverance. Above all, they are a sensitive testimony to survival without guilt, and to a love of the culture and identity that shapes us and gives us our humanity.