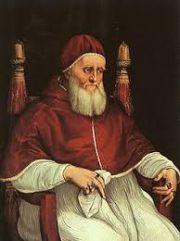 ‘Raffaello 1520–1483’ at the Scuderie del Quirinale has been closed since the beginning of March 2020 due to the COVID-19 restrictions.  A virtual view of the exhibition is available online on the museum’s website and on YouTube: https://www.youtube.com/watch?v=F3JDrfGfGUk

More information and videos about the artist in his time are available on the website at https://www.scuderiequirinale.it/mostra/raffaello-000, which includes interesting lectures and insights, although unfortunately they are all in Italian and there are no subtitle options.

The exhibition was organised in collaboration with the Uffizi Galleries and acts as a flash-back to Raphael’s life and career.  It starts from his sudden death in Rome five hundred years ago.  He died after only a few days with a high fever, which was probably worsened by the blood-letting cure practised at the time.  His death was mourned by artists and by his patrons, the banker Agostino Chigi, who died a few days later, and Pope Leo X.  Raphael was only thirty-seven; he was at the apex of his career and was considered to be the model of the ideal artist, almost supernatural.  The funeral was on 7 April 1520.  The tomb was ready in the Pantheon in Rome, the temple dedicated to all gods and his favourite ancient edifice – it was an ideal of perfection and inspiration for Renaissance architects.  Inside his tomb there was a statue of the Madonna with child that Raphael had commissioned to Lorenzetto, who was inspired by a Roman statue of Aphrodite.  The inscription on his tomb reads:

This is Raphael’s tomb, while he lived he made Mother Nature fear to be vanquished by him and, as he died, to die too.

The inscription points to the creative power of the artist who shapes reality into a new vision that is inspired by reality but is made in a new, idealistic way and, in Raphael’s case, creates a more beautiful expression.  According to this perspective, the parallel and the comparison with the iconography, sculpture and architecture of ancient Rome were fundamental to Raphael’s work in his later years.

When he arrived in Rome in 1509, having travelled from Florence, he found an artistic circle at the court of Pope Julius II della Rovere that included artists such as Bramante, Pinturicchio, Antonio da Sangallo and Michelangelo.  The Pope himself had invited both Michelangelo, who was thirty-three, and Raphael, who was twenty-five, to work in Rome.  The Pope commissioned Michelangelo to decorate the ceiling of the Sistine Chapel and Raphael the reception rooms of his apartment.  This gathering together of the greatest Italian artists of the time allowed the creation of works that are considered among the greatest achievements of art of all time.

Julius II, a warrior and a scholar, and Leo X, his successor, son of Lorenzo de’ Medici, were well aware of the political importance of art to spread and publicise the ideas of the papacy.  They were also aware of the cultural importance of the artists of their time, that is, their masterly renewal of art not only through their techniques and forms and the colours they used but also through the theories and views they conveyed through their art.  These views were linked to Humanism and Neoplatonism, which flourished in Florence in the 15th century, the quattrocento.  Florentine Neoplatonism was a mediation between the ideas of the Greek philosopher Plato and Christianity.  This is reflected in Raphael’s famous fresco ‘The School of Athens’ in the Stanza della Segnatura, one of the four rooms he painted for Julius II.  In the fresco, the human figure is at the centre and is represented by the philosophers from ancient times, such as Plato, Aristotle, Socrates, Heraclitus and many others.  Philosophy is meant to represent reality, the truth, while theology is the revelation of the good.  These are considered to be the two aspects of humanity that give human beings dignity and the power to discern reality and to create ideals.  ‘The School of Athens’ is also an architectural synthesis that shows Raphael’s interest in ancient Roman buildings and his skills as an architect.  The exhibition explains that he was in the team that was designing St.  Peter’s and, as an architect, realised Chigi Chapel in Santa Maria del Popolo in Rome, inspired by the Pantheon, and Villa Madama for the Cardinal Giulio de’ Medici, then Pope Clement VII.

Pope Leo X commissioned Raphael to survey the buildings of Ancient Rome.  The artist produced several drawings and explained how he proceeded in his work in a prefatory letter written with Baldassarre Castiglione.  In this letter, he said he had carefully measured the edifices using graduated instruments including a compass.  The authors also recommended the conservation and restoration of the Roman heritage, which was considered a very modern approach.  According to Raphael and Castiglione, the monuments were models of architecture for the artists of their time and testimony to the past glories that needed to be renewed in a modern cultural perspective.  This idea was in line with the Pope’s political ambition to present the papacy as the heir of imperial Rome.  The Renaissance had its roots in the ancients renewing their heritage in a new vision centred on human beings who are the creators of their own life thanks to their technical and creative capacities and their ability to aim for ideals.

Raphael started helping out from a very young age at his father’s workshop in Urbino, and during these early years he was deeply influenced by Pietro Perugino and Piero della Francesca.  The facial features in his first pictures and the poses of the figures are similar to Perugino’s, although the compositions resemble the sculptural forms of Piero.  Raphael had the ability to observe, learn from and use ideas from other painters, adding his personal interpretation when he composed clear and balanced forms that became the essence of his style.  In time, he broke away from Perugino, especially during his later years in Rome.  In 1505, Raphael was in Florence, where he met da Vinci and Michelangelo.  He was influenced by Leonardo da Vinci’s landscapes that are visible in the background of his portraits.  However, Leonardo’s colours are darker than Raphael’s and his art was aimed at the study of nature and its effects while Raphael was focused on colours as they appear in bright daylight and on the centrality of the human figure.  The monumental aspect of Michelangelo’s paintings, as in the frescoes in the Sistine Chapel, which Raphael was very familiar with, is transformed in an elegant way by the artist from Urbino.  In Raphael’s works, the sense of balance and the composure of the figures prevail over the power of the body.  His portraits and Madonnas convey a sense of serenity that is expressed in the juxtaposition of the forms that are reminiscent of ancient Roman sculptures and paintings.  The beauty and perfection of the features and the vivid colours, which some critics link to Venetian painters, are the characteristics that mark his style.  As Ernst Gombrich points out in The Story of Art, Raphael in his mature works did not copy a specific model but created ‘a certain idea’ he had formed in his mind.  He followed the method of ancient Greek artists, producing an idealised model by taking the most beautiful features from several examples.  It was an imagined type of beauty that improved nature without losing vitality.  This is again linked to the Neoplatonic idea that knowledge is based on a memory of ideas rather than on real objects.  Raphael produced a realistic kind of painting which was at the same time idealistic.  He depicted a world that is related to reality but also idealised his subjects by placing them in a setting of a supernatural world of harmony.

In Rome he had the opportunity to develop all his talents and potential as a painter, an architect and an art curator and as the director and master of his vast workshop that included several assistants and apprentices who helped him accomplish his numerous commissions.  He produced a great number of altar-pieces, portraits and Madonnas with child and saints; he also produced the frescoes in the Pope’s rooms, the cartoons for ten tapestries on the lives of Saint Peter and Saint Paul for the Sistine Chapel and worked as an architect on St.  Peter’s.  He also accepted commissions from the richest man in Rome, the banker Agostino Chigi, who was building his new villa, La Farnesina.  Raphael painted one of his most famous pieces in the villa, of the water nymph Galatea triumphantly sailing on a shell surrounded by cupids and tritons.  She has a central role in the picture and is the personification of the ideal beauty Raphael pursued in his feminine figures.  The picture is particularly praised for the harmony of the composition that conveys a constant movement in the poses of the different characters.

The exhibition ends with works produced during Raphael’s early years, including the self-portrait of himself as a young man, the enfant prodige.  His graceful aspect is reflected in his art in general and in the beauty of his portraits of women who are ideal and corporeal at the same time; these are flawless examples that maintain their liveliness in a skilful synthesis of art and life.