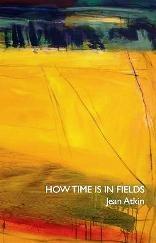 It took me two false starts to find my way, start to finish, through this collection. However, that should not be taken as a criticism. Jean Atkin teaches us that so-called nature poems should not be an easy read. On the back cover the poet, Elisabeth Sennitt Clough, notes that ‘this is not a collection motivated by tranquillity.’ I agree entirely. Jean Atkin does not shrink away from the nature’s underbelly where ‘air smells of dung’, ‘dead stock’ and ‘gunshot’. How Time is in Fields is laced through with folklore, mythology, history and a forthright and deep knowledge of the countryside, a walker’s knowledge – and walking, I know from experience, can be a sweaty, occasionally uncomfortable, but always thought-provoking business.

I was not at once at home with the ‘almanack’ format at the start of the book with its unfamiliar vocabulary based on Old English. However, a second reading, and a good set of end notes, allowed me entrance. Like a musical score, Atkin sets out with the old English word, then threads in the rhythm of the walk:

Ancient and modern at once, the strangeness became more attractive with each subsequent reading. She returns to the almanack four times, once for each season like a leitmotif in a musical composition, ending with:

Atkins demonstrates so many poet skills in this collection that it is hard to know where to begin in praising them. She recognises the importance of good, strong verbs, adapting them to her purpose. In ‘How we rode after haytiming’ ponies are ‘hairtriggered’ into flight by a shout. In the poem ‘In Yellowhammer Weather’,

rub, brace, rake – and with a dash of alliteration to boot. In a diary poem, ‘Eglwyseg Day’, a path is ‘full-stopped’ at a brink by a sleeping sheep,’ and later, a dead sheep is ‘spreadeagled’ by a wall. In the final poem, ‘In a fair field at Whiteleaved Oak’, ‘a whole wood “boomed” under a plane.’ I could fill this review with more such examples, but there is much else to mention.

The title poem is a masterpiece of what I would describe as the personification of the natural:

— another terrific verb ‘wavered’ the clover. We find ‘Manes of Elderflower’ flowing into a hedge, and the poet heads downhill, with barley ‘hissing’ on her jeans. And then unexpectedly, a triumph in four stanzas in full rhyme, appropriately staggered: ‘The tattoo’d man’

The poem continues with a well-rounded characterisation built on details from his tattoos, concluding:

This portrait is so vivid, you can see the man leaning over the bar to order his sixth pint, but in all his rough exterior, the poet manages to convey a sense of empathy. She establishes this palpable connection again through the judicious use of metaphor and simile in ‘Not there, nearly’ , epigraph, ‘Old Church, Slade’: the morning is ‘cream blackthorn warm’, the air is ‘lamb-bleat’ soft, ‘A tawny owl flies in daylight, has the wrong century’, and in the final stanza, ‘the moat ghosts halfway round / its mound. Bluebells glimmer like a rumour.’

Nowhere is this use of metaphor emerging from description more evident than in ‘The breaker’, in this case of horses. The poet introduces him, telling the reader how he does his job and then underpins this through powerful metaphor:

Wherever she takes us, Atkin’s poems are grounded in life, death, and the passage of time. It is all there in ‘Nettle lexicon’. The poem is set out in four numbered stages of life and place with a generic ‘definition’ for each: ‘1 nettle of the edgelands / the dare in childhood to touch a nettle: will you grip that hairy leaf? / Stand still and rigid for this ordeal / while they wait in a circle to watch your face?’ The fourth nettle takes the reader beyond the personal to the symbolism of nettles where they become ‘markers /for our wiped-out villages, abandoned farms.’ The poet asks us to notice: ‘how rife they are in lost places.’

Images of loss and death are threaded through this collection, marking how time is in fields, how we cannot stop time. The poet finds a dead oystercatcher: ‘our children white / with shock, they’ve not yet seen the death / of something young.’ (‘Oystercatchers’). In ‘near Todleth’, A lame ewe ‘lurches away from her twins / her bag all lumpy with mastitis.’ In ‘Boreas’ (the purple-winged Greek god of the North wind – my note),

In only 4 lines, 2 stanzas, Atkins pinpoints what wintertime means, what it does. I find a blend of hope, pathos and wistfulness here, with a profound insight that celebrates nature in all its aspects, benign and raw at once. Someone said, or maybe I made it up myself, that there is such life in looking death in the face. That is exactly what this poet achieves in this unique and beautifully executed collection.