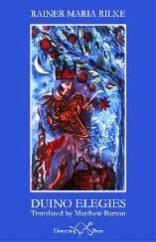 Rilke (1875-1926) is generally considered one of the greatest German-language poets; he was actually a Czech, born in the old Austro-Hungarian Empire, and a citizen of Europe. His Duino Elegies comprise ten poems, written over ten years and published in 1922. They have often been translated into English; Matthew Barton, a fine poet and a professional translator, is the latest to take them on.

They are not elegies in the usual sense of the word. I can best describe them as a prolonged meditation by a poet who feels that the world is not his home, who is suspended between the life we know, with its manifold problems and failings, and an order of beings called angels. The first line of the first poem is: Wer, wenn ich schriee, horte mich den aus der Engel Ordnungen? which Barton translates:

These are not Christian angels. They represent absolute perfection, the state which poets and idealists are always trying and always failing to attain. If he did make full contact with an angel, the poet says, ‘I’d expire’. Rilke suffered from several serious depressions (caused in part by the First World War, which was going on while he was slowly composing the Elegies, although he did not fight). Happiness, he says, is ‘merely/easy credit with a looming payback date’. ‘Flowering and decay – continually/ we’re conscious of both at once’. Perhaps we should envy the animals in the eighth Elegy, who know nothing about their future:

Love is certainly not the answer to man’s situation. ‘Enough of all this wooing, all this courtship’, the seventh Elegy begins:

And then there is heroism. The sixth Elegy considers those who die young, perhaps in war, and have achieved a kind of perfection. But we aren’t all heroes; Rilke is distressed by the deaths of children and the suffering of beggar girls, and obsessed by what we all know, that time cannot be stopped:

His solution, suggested in the ninth Elegy, is to keep struggling to get nearer the angels, to celebrate ‘simple, everyday things’, like ‘the ropemaker in Rome, the potter at the Nile’. The last, tenth Elegy urges us to turn away from trivial pleasures and keep heading for the heights.

Rilke was a Modernist. The Elegies appeared in the same year as The Waste Land and he was influenced by Picasso’s painting The Acrobats (fifth Elegy) and the dancing of Nijinsky. He is modernist too in that he feels no obligation to connect with the common reader and actually says very little about ‘simple, everyday things’.

Barton’s translation reads fluently in English. It’s a good starting-point for those who don’t know German and wish to discover a major European poet through his major work. I don’t see how it could have been done better, yet I’m not actually convinced of Rilke’s greatness. Compared with his contemporaries, Cavafy and Yeats, or the younger Brecht, Lorca and the great Russians, his Elegies seem bloodless, remarkably detached from ordinary experience. They are all about the significance, or insignificance, of human life, but there is an almost complete absence of ‘human interest’.