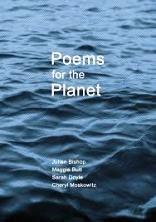 Poems for the Planet

This review is not only of the chapbook Poems for the Planet, but also of an event at Faversham Literary Festival on 22 February 2020. During the reading we were told of the estimated 300 million people who will be displaced by floods if the global temperature rises by 4°C; and of ‘insectageddon’, which is already underway. The latter is noticeable as we no longer have to wash car windscreens of squashed creatures, once seen as a nuisance; their absence is now a sign of how close we are to ecological disaster.

Julian Bishop’s poem, which begins with wiping insects from his father’s Ford Capri, read at Faversham Literary Festival, does not appear in Poems for the Planet. I did not catch the title, but it stayed with me, nonetheless. While a Blue Whale skeleton hangs in the Natural History Museum as a reminder to build a sustainable future, less appealing creatures also need our attention.

Poems for the Planet, and the Poets for the Planet movement (it numbers many more poets than those reviewed here), addresses our climate and ecological emergency. All profits from the sale of the collection go to eco-charities. (The book is most easily through the website https://www.maggiebutt.co.uk/poets-for-the-planet.)

Julian Bishop’s “Fatberg” describes an exhibit at the Museum of London in 2019, ‘a biological curiosity / with the body of an octopus / but no limbs’. It has ‘bulging condom eyes’, and is described as the child of a ‘mother / snoozing in Whitechapel’s bowels’ and also as ‘a recumbent stalagmite / of discarded wet wipes’. No Doctor Who fantasy creature, this, but a monster of our own making. It is a reminder that the climate emergency is not only the fault of others, but we also bear a responsibility. Indeed, in Bishop’s “Lobster”, a poem shaped like a drinks can, there is evidence of the effect of the casual acts of humans. The lobster is hooked on Pepsi, literally, and likened here to an addict. ‘He got a tattoo / – festooned in red and blue’, and ends up ‘Junked, with only a Pepsi filigree.’

Maggie Butt’s poems address both past and current reality, and an imagined future. “Chipko – 1978” chronicles the Chipko movement, which saved a Himalyan forest from being cut down. “Hurricane” remembers Ophelia, the 2017 hurricane: ‘her furious breath / fans forest fires in Spain and Portugal,’ ‘whipping up their ash with one flick / of her scaly tail’.

The conjuring of a mythical creature is reprised as an idea in “The Patron Saint of Eco-Warriors”. She searches for ‘converts’ to

This poems ends with the hope that ‘Her warriors will clinch the miracle / to save all miracles, for they will save the earth.’

Sarah Doyle’s standout poem, both in performance and on the page, is “A Song of Asking”. It has a nursery rhyme quality, using repetition and a building of questions that lead from asking one natural phenomenon after another about their failings. It opens with ‘We asked the bird why it would not nest, why / it would not nest.’ The poem’s end returns to the birds at its beginning; with humans taking no responsibility for their actions.

Doyle’s “East Coast Blues” is a journey in rhyming couplets. ‘Young males’ with ‘wanderlust’ ‘travel with cartography in their blood’, sure of their ‘gift of maps,’ only to find ‘where once was deep and blue / turns treacherous and shallow’. For these adventurers are whales, beached, ‘Flotsam, jetsam, tidal wrecks: tails and teeth and fins, / no match for land.’

Cheryl Moskowitz’s long poem “Why should we care” was commissioned as a spoken word piece, and deserves to be heard in performance. Within the poem is ‘a story about geese’, how they change positions as they fly ‘arrow-shaped’,

So the front goose falls back, and ‘two others will fall / deliberately to be with him.’ ‘We stay alive by looking after one another.’ Here’s another reminder that we cannot take on this fight alone, that we need to rest, and to join forces with others, like the Poets for the Planet have done.

Those of us who marched to Save the Whale can be proud, some forty years later, of the recovery of the numbers of whales in the southern hemisphere. Perhaps the voices of the Poets for the Planet will also be heard, alongside those of Greta Thunberg and the school strikers of this world.