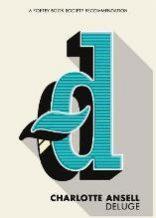 Poetry review – Deluge: Rosie Johnston finds that generosity of heart combines with expert technique in the poems of Charlotte Ansell

Charlotte Ansell lives on a boat with her family and a ‘pirate’ cat. Currently on the tidal Medway in south east England, they made their way there down the North Sea from London via Sheffield, a homely Odyssey reflected in this marvellous collection, Deluge. A Poetry Book Society Winter Recommendation last year, this is Ansell’s third collection published by Flipped Eye, after You were for the Poem (2005) and After Rain (2009). Her section headings bring Turner to mind: Drizzle, Rainbows, Umbrellas & Lifeboats, Storms, Immersion, Baptism.

Ansell is a mesmerising performance poet who also entrances on the page. Her poems have appeared in Poetry Review, Mslexia, Now Then, Butcher’s Dog and several anthologies, including the impressive Sheffield Anthology in 2012. She won the Red Shed Open Poetry Competition, 2015, was a finalist in the BBC Write Science competition in 2015 and in 2016, she won the Watermarks poetry competition in aid of flood victims in the Calder Valley. She helps to run Loose Muse London, a monthly showcase for women’s voices, with Agnes Meadows.

Flipped Eye has been publishing a broad range of international voices (remarkably cheaply) since 2001 and is proud also to have nurtured and published, among others, Inua Ellams, Malika Booker and Warsan Shire.

Ansell thanks her ‘long time muse and closest friend, Jennie McShannon’ who is the beneficiary of beautiful poems that condense the complexity of female friendship. In “Jennie”, we meet the ‘queen of the faux pas, regaling / any room with your tales – that laugh!’

In the collection’s first poems, the tone is fast, happy and resilient. Their young friendship fizzes again in “In Praise of Us” –

Deluge’s theme, however, is the blend of movement, transition, exile and home. “A Little Scrap of Nowhere” lets us in on how it feels to live beside a towpath. Any picture postcard charm rubs up against grubby reality –

Several stanzas that begin with ‘If’ lead us, as if by the hand, to the perfect close –

Family is a major ingredient in Ansell’s sense of home. Her prose poem “They didn’t tell you” is a straight-talking list of aspects of maternity that often go unsaid:

Yet, in a superb poem called “Document”, the poet casts an unsparing eye on her own body, how the years are written on it, ‘the creep towards a fading script’, and describes ‘the absolution of births’:

Ansell loves to mix contrasts and it is not until the penultimate line that she gives us a romantic twist. The collection is dedicated to her husband Sean –

Ansell works in the NHS child and adolescent mental health service as a child psychotherapist and knows that, whatever dominates our news pages, certain aspects of society’s underside are always with us. She turns her attention to children less loved than her own in “Those Girls”. Between 1997 and 2013, countless young people in Rotherham were sexually exploited, some of them only eleven years old. As a counsellor for six years until 2013 in the local youth counselling, advice and sexual health service, Ansell met some of those who managed to have access to the therapeutic help they deserved, and wrote this outstanding poem –

To say this poet is perfectionist is an understatement. Her generosity of heart combines with expert technique and powerful storytelling to make sure the impetus never lapses. Two strands tie this important collection to its mooring: family and the boat. Nowhere better than in the close of the final poem “Containment” –

Rosie Johnston‘s four poetry books are published by Lapwing Publications in Belfast, most recently Six-Count Jive in 2019. Her poems have appeared or featured in Hedgerow, London Grip, Culture NI, FourxFour, The Honest Ulsterman, Mary Evans Picture Library’s Poems and Pictures blog, Words for the Wild and From The Edge magazine. Her poetry has appeared in anthologies by Live Canon and Of Mouth (Northern Irish women’s voices) and is to be included in the forthcoming Places of Poetry anthology. She reads her poetry widely, most recently at the Faversham Literary Festival, Canterbury Festival, Crescent Arts and the Linen Hall Library in Belfast, Margate’s Pie Factory, the Troubadour, In-Words in Greenwich and Whitstable’s Harbour Books. She runs writing groups in Cambridge and Canterbury and hosts a monthly spoken word event, Word of Mouth #Whitstable. www.rosiejohnstonwrites.com