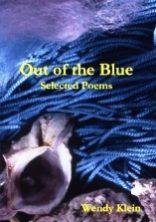 Poetry review – Out of the Blue: James Roderick Burns is struck by the unusual coherence of this volume of selected poems by Wendy Klein

Out of the Blue is a substantial selection of Wendy Klein’s three collections – Cuba in the Blood, Anything in Turquoise and Mood Indigo – but unlike many selected poems, doesn’t feel that way. There’s no sense of a brisk trot through a body of work, with judicious sampling and perhaps a sprinkling of new work as a coda, signalling a new direction for the collection to come. (Though hopefully the poet will be bringing out more.) Instead, we have the heft and impact of a book which works as a book – themes developed, teased out, branching and diversifying over a hundred pages – its key preoccupations with family history, geographical and cultural dislocation, the impossibility of beauty without accompanying ugliness rammed like stakes into the landscape, marking both our journey and our understanding.

It would be easy to characterise ‘Out of the Blue’ as an accomplished mediation on these three themes; after all, geography, politics and culture shape families, moulding as well as splitting them apart, and in the process much beauty can be made to give way to greater misery. But the book resists such a reading. What to make of the run of Cuban poems which open it, for instance? Family tensions are here, and hints of both pride and downfall, but each poem reaches small, delicate feelers beyond the surface meanings of the poems into wider culture and its shifting sands, both seductive and dangerous:

It is an extraordinarily subtle portrait of a city, all the more so for its deliberately crude, almost caricatured beginning (“she’s an old whore, who drags/her soiled petticoats/through the moist dark”) and its sandwiching between two vivid, concrete poems about the loose rhythms of the streets, the rigid discipline of the cigar factory.

In the same way, a poem such as ‘The Necktie Quilt’ starts simply – another poem of a family member in the scattered past, brought lovingly back to life (“after his death at eighty one, which she believed was premature”), it takes a clean idea, scissored-up silk ties reclaimed for their colour and expressiveness (that “old Singer” humming and whirring a lovely, multi-levelled touch), and utterly complicates it as the poem progresses. The last stanza, bursting with life and pathos, removes any hope of a dull and single response, forcing the reader’s nose at once to the rough stone of compromise, and ear to the trill and slap of complicated lives:

The writing is dense, the long lines full and urging themselves onward with the solid inevitability of prose. Even in this one stanza there is so much to unpack: the cultural resonance of colours that are also names; that wound of blood and rage, folded away into a secret, inner place; the defiant sadness of the last verb, and the plangent single bed. The writing underscores what is perhaps the poet’s greatest theme – though we might wish for rounded, solid meanings, and the world to work as a consistent and predictable place, it rarely does; complexity, difficulty, beautiful and ugly laced together with barbed wire is more the norm.

This is not to say Klein is a poet of ugliness, for lyricism abounds in Out of the Blue:

But such fireworks are never deployed for their own sake. At the end of what is perhaps the most moving poem in the book – and incidentally, one which in my view does itself what this unusual selected poems does in its entirety, that is, functions as a necessary book of parts made greater by an irrepressible animating spirit – we see the conjunction of all themes, then the subtle use of a lyrical image to underscore them.

‘His Sister’s Coat’, dedicated to the lost – or perhaps those who waited for them – hints at displacement, hope and disappointment, wrapping all things up in the tactile presence of a fur coat shaped by its absent owner. Even as hope dies, and coffee cools, there is something waiting beyond tragedy to single out the bright thing, and that bright thing is the poem – and perhaps the poet: