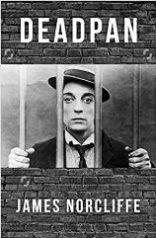 Poetry review – Deadpan: Emma Storr examines the art of masterful understatement as displayed in a new collection by James Norcliffe

The enigmatic Buster Keaton, comedian of silent films, stares at us from behind prison bars on the front cover of James Norcliffe’s tenth poetry collection, Deadpan. Keaton’s facial expression is difficult to interpret: is he hanging on to the bars for security to keep the world out, or is he is hoping to be released? The reticence and ambiguity implied by the term ‘deadpan’, appeals to Norcliffe, who says he enjoys reading and writing poetry that is ‘allusive, elusive, wry and surprising’. These are good adjectives for describing the detached emotional tone he adopts throughout the five sections of the book: ‘Poor Yorick’, ‘Scan’, ‘Trumpet Vine’, ‘Telegraph Road’ and ‘Five Travellers in a Small Ford’. Understatement and wit are used to evoke recognition of our fragile human state that can make us laugh and cry at the same time.

In the opening section of the book, adopting the persona of Yorick, allows Norcliffe to play with ideas of ageing, loss and sincerity. ‘Yorick’s Heart’ introduces us to the elderly jester in hospital, infantilised in his new red and yellow aeroplane pyjamas and stripped of any equipment that he might use to self-harm – shoelaces and scissors. Norcliffe demonstrates his skill in using different poetic forms in this sequence of twelve poems to create humorous and poignant reflections on the transient nature of life and the inevitability of death. The repetition and rhyme scheme in ‘Yorick laughs’ and ‘Yorick weeps’ makes these two poems sound like invocations:

An ominous tone lurks underneath the humour in all four stanzas which end:

It is a shame that the two poems do not appear on opposite pages in the collection to highlight their similarities and contrasts even more.

The following four sections of the book range in time and location. There are windy, empty beaches in New Zealand, urban environments in Europe and unnamed landscapes in which human identity seems fluid and transmutable. Norcliffe excels in writing short poems that raise profound issues in uncomplicated language.

The surreal and absurd often reflect the mood of the narrator in unexpected ways. In ‘There are times I feel like an egg’, the speaker describes how depression permeates his days: ‘there are no shortcuts/ through the suburbs of my malaise.’ The egg metaphor suggests fragility and possible breakdown. We return to this image in the last line of the poem after the indifferent public who offer ‘cheap lessons’ in clichés, scurry home to their ‘bitter tea and scrambled eggs’.

Norcliffe enjoys using imagery from the natural world, sometimes in playful ways as in the delightful and lyrical ‘Reforestation in the living room’. Other poems reveal how closely decay and death hover on the margins of our everyday lives. His language is sparse and succinct, often presented in two or three line stanzas without punctuation, as in ‘scrim’, a poem that paints a bleak landscape where ‘what were once buildings / crouch in their sorrow’. The theme of a post-apocalyptic world is also suggested in ‘Site content’. The speaker explores a silent, eerie place bereft of animal or human life. Everything is ‘Long gone. Like the moon itself, long gone.’ The sense of loss and bewilderment is tangible in the repetition in this single last line.

Norcliffe describes himself as a ‘plant buff’, which is perhaps why he names particular trees, bushes and fruits in many of his poems. In ‘The poets at Makara’, the wind and crashing waves rip away and destroy the poets’ words and images:

Both these plants are spiky and hostile, a fact you can induce from the following three stanzas in which the poets give up their creative endeavours and drive home through green valleys of willow and hydrangeas where ‘arum lilies poke out / their yellow tongues’, teasing the silent, subdued writers. Norcliffe’s sardonic tone and wit emphasise the insignificance and impotence of human beings (particularly poets!) faced with elemental forces.

A different and more sinister interruption to human acitivity is evoked in ‘Pursued by crabs’ with its short stanzas spaced out on the page. The narrator is reflecting on a time when he was on a beach, ‘the site of my stupidity’. He and the crabs are both observing, making notes, taking evidence. The anthropomorphic transformation of the crabs into witnesses is a clever device to suggest that the narrator is guilty of the same crime he is purporting to watch: ‘beyond the dunes: the grey water where the bigamists were sporting, frolicking,’ The crabs have the last word when they emerge from ‘their pencil holes’ and use their small black eyes as ‘full stops to end my sentence.’ The surreal tone of this poem suggests a certain degree of paranoia on the part of the narrator. The crabs seem to know what is going on and the double meaning of the word ‘sentence’ raises unanswered questions about who has committed bigamy and the legal consequences.

In other poems such as ‘She moved through the silence’ and ‘Leaves’, images of the sea and autumn respectively capture those painful periods in relationships where communication goes awry: ‘your eyes were filled with layers / before you turned away’ prevents the narrator asking a question we imagine is a very important one. The longed-for rain that never arrives mirrors the suppressed grief of the couple and the absence of water to renew and refresh the situation.

Norcliffe is a New Zealander of Yorkshire and Scottish ancestry, which he thinks might explain his preference for privileging ‘reticence over passion’ and ‘jokes over engagement’. The result is a masterful collection of poems that rely on understatement, a nudge instead of a shove. We view the human condition with humour and affection in language that is precise, plain and deadpan in its delivery and wit.